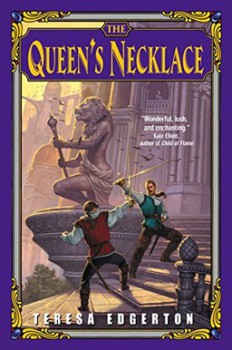 The Queen’s Necklace (2001) by Teresa Edgerton (with its title borrowed from Alexandre Dumas) is a perfectly splendid swashbuckling adventure in an Age of Reason-like world as it teeters on the precipice of collapse.

For five thousand, years Goblins using powerful magical gems ruled the world, keeping Humans enslaved and uneducated. Fifteeen hundred years ago, Humanity rose up and slaughtered most — but not all — of the Goblins. Now a millennium of plotting by the Goblin aristocracy is about to culminate in their return to power in a wave of chaos and destruction.

The Queen’s Necklace (TQN) is one of the many (too many!) books that’s sat unread for years on my shelf. Ocassionally the thought would occur to me to pull it down and finally give it a go, but I never followed through. When I reread and reviewed Edgerton’s earlier novel Goblin Moon this summer, she suggested I give The Queen’s Necklace a try, mentioning that it was possibly going to be reprinted in the autumn. So I figured, what the heck, I had bought it with every intention of reading it at some point, so why not now? And I’m glad I did.

While not connected to Goblin Moon and its sequel, The Gnome’s Engine, TQN occurs in a similar Enlightenment setting. There are perfumed fops, dueling rakes, mysterious women, and equal parts quackery, science, and magic.

Edgerton is no minimalist, instead preferring to provide rich, complete visions of things. Her talent at creating a lovingly and exquisitely detailed world with its various cultures is on even better display in this novel than the earlier ones. A city central to the story is described thus:

Many of her buildings stood half empty. These Men of the new age were increasingly conservative, less and still less inclined to tamper with the work of their ancestors  —  those stalwart men and women who had brought down the Goblin civilization and created a new Society, nearly perfect, in its place  —  nor to remove anything created by previous generations. Nowhere was this so strikingly evident as in Hawkesbridge. When the lower floors of a house became dank and musty and uninhabitable, the owner simply erected new stories on top. When the whole pile collapsed, often with a great loss of life and goods, instead of hauling the ruin away, he scavenged the better parts of the marble and masonry and built a new house over the wreckage, as much like the house that had been there before as it was possible to make it. By now, Hawkesbridge was a city of crooked tall buildings with bow-front windows, cracked marble columns, and winding exterior staircases crawling up from deep overshadowed streets and alleys below.

Equal time and care is devoted to describing the cast of characters. Even minor players are presented in bright detail:

On the day following Wilrowan’s duel and its unfortunate conclusion, an elegant gentleman appeared at the lodge by the outer gate and presented his credentials to the burly individual who answered his knock. The gaoler subjected him to a careful scrutiny, taking in the coat of flea’s-blood satin lined with sable, the white silk stockings and immaculate small-clothes, the silver-hilted sword and point-lace ruffles, the fair hair perfumed and pomaded, the red-heeled shoes and the little jeweled eyeglass worn on a black velvet ribbon. Deciding that this was no man to be trifled with, the turnkey unlocked the gate and ushered him inside.

I love the implication here  —  any man who dares to dress like that is most likely dangerous enough to back it up. Edgerton’s writing is fun and clever throughout the book. Moving with a light touch here and with a more forceful one there.

The Goblin race is made up of several related, but very different, types of beings. At the bottom of the social ladder are the diminutive Padfoots and Ouphs. Above them are the mercantile Wrynecks, more Human-like and -sized, but with bent necks and hunched backs and born of mandrake roots. Next are the scholarly Grants. Though appearing very like Humans, their limbs are jointed in very non-human places and ways.

Forming the aristocracy of the Goblin Empire are the Maglore. Like their lesser brethren, they are highly flammable and find salt deadly toxic, but they appear completely Human. By exploiting their physical similarity the remaining Maglore hope to place one of their own on a royal throne and subsequently initiate Man’s downfall.

At the black heart of this effort is the Goblin princess, Ys. Raised with the singular purpose to marry a Human king and seize power, she is well-schooled in manipulation and deceit. Her governess, Valentine Solange, is the true mastermind of the Goblins’ plots and is deadly focused on restoring Maglore power. Ys is as driven by a desire to restore her people’s power as she is desirous of gaining autonomy from her iron-fisted governess.

For their part, Humanity has striven to create the perfect world since the uprising against the Goblins. In the first flush of freedom, the various nations fought against each other in bloody wars. The settlement that followed, enforced strictly and with violence when needed, built a stable, if stagnant, world. To prevent the growth of empires, no royalty from one nation may marry any from another. Science is encouraged, unless it is too groundbreaking.

Helping secure all this are the magical gems of the Goblins. Each kingdom possesses one such gem and uses it to power a device that has become inseparable from its kingdom’s well-being. In northernmost Winterscar, the gem holds back a massive volcano from erupting. In Mountfalcon, it powers the billows and air-pumps that bring fresh air to workers deep in the mines. Stealing back the gems is the second part of the Goblins’ plan.

Captain Wilrowan Blackheart of Her Majesty of Mountfalcon’s Guard is embroiled in the Goblin plot when the Mountfalcon gem is stolen. Unbeknownst to Will his wife, Lilliana Brakeburn Blackheart, is a member of the Specularii, a secret society of wizards dedicated to preventing the Maglore from returning to power. She, too, is enmeshed in the search for the stolen gem.

In the rakish Will Blackheart and the more commonsensical but equally daring Lili Blackheart, Edgerton’s created a lively pair of heroes. Both were tricked into marriage by her father while still very young. Never truly in love, most of their marriage prior to TQN has been spent apart. Now that is changing and their “courtship” is deeply romantic and delightful. That this courtship takes place on a stage set with dastardly plots, magic rituals, and tumbledown old mansions only makes it more enjoyable.

There’s a major sideplot involving a scholar, a mad king, a beautiful girl, and a secret agent dressed in black. I usually dislike sideplots, but I loved this one. The tales spun by the mad king Izaiah and the young Tremeur Brouillard are pure gossamer silliness. Aside from giving Edgerton the freedom to introduce a host of other charming characters, it serves to further flesh out the world. Never once did I feel like I was missing out on more important events going on in other parts of the world while reading these chapters.

The Queen’s Necklace exists on the same plane as Sabatini’s Captain Blood and Dumas’s Three Musketeers. Even when the plot gets grim, there’s still a sense of playacting and that the world’s a wonderful construction of bright nonsense that exists for heroes and villains to play out their escapades upon. Books like this give me a respite from the bloody monotony of the news and unavoidable encroachment of time. I get a chance to ride a recklessly driven coach over wild roads on the hunt for a stolen gem or fight a duel for my wife’s honor.

At nearly six hundred pages, this book is much longer than the fantasy novels I tend to read and enjoy these days. I find that longer novels tend to get saggy, and sideplots with minor characters just distract. This suffers none of those shortcomings. In fact, my one complaint with the book is that the end feels a little rushed. Some characters get lost as the action narrows down to its final moments. Nonetheless, the book concludes in a marvelous series of sword fights, magical combat, and lots and lots of fire.

In fact, while it’s not needed, there’s plenty of room for a sequel to The Queen’s Necklace. While many of the story’s crises have been resolved, the world is still in recovery from a series of calamities wrought by the Goblins’ plot, and the stasis sought by Man is starting to crumble. The Blackhearts and the sundry scholars, wizards, and dowager aunts that people her world are characters I’d gladly spend more time with.

Sadly, though, this was the last book Edgerton wrote under her own name. Presumably due to the vagaries of the publishing world, she reinvented herself a few years later as Madeline Howard. Under that name she wrote the first two books in the Rune of Unmaking trilogy before falling silent for the last decade. I hope HarperCollins’ decision to reprint this book indicates and stimulates a renewed interest in her work.