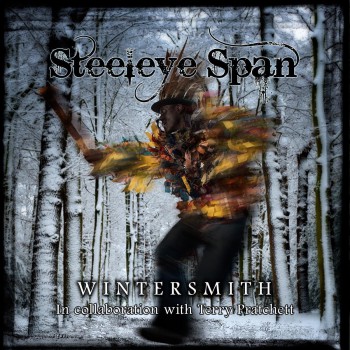 In late 2013, a strange event occurred: Steeleye Span, a British band that has outlived just about all other contenders except the Rolling Stones, released a CD entitled Wintersmith.

Coincidence? After all, there’s a Discworld spin-off by that name, too, a Terry Pratchett novel aimed at the young adult market and starring the infinitely resourceful tween witch, Tiffany Aching. Could there be a connection?

Indeed. It turns out that Pratchett has been a fan of Steeleye since the early seventies (“Boys Of Bedlam” was a particular favorite), and Steeleye’s lead vocalist, the incomparable Maddy Prior, has been, in turn, an unabashed fan of Pratchett’s. They got to talking, and next thing you know, the world was gifted with a terrific fantasy-driven album of folk, rock, and traditional Morris dances, all tied together by the Great A’Tuin and a nasty case of winter.

Pratchett’s Wintersmith is the third installment in the irregular Tiffany Aching series, a sort of sideline to the “official” Discworld novels (The Color Magic, et al). The story centers on Tiffany’s impulsive decision to “dance the Dark Morris,” a rite that shifts summer to winter – except that when Tiffany includes herself, both summer and winter, elemental godlings, take note of her and seek, in their own ways, to possess her. Tiffany now faces the possibility of endless winter, in the demi-human form of a smitten teenage boy. 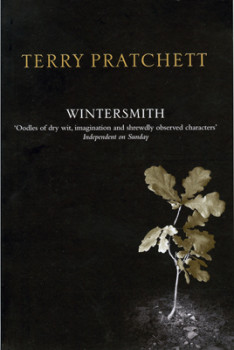 Tiffany has help aplenty, mostly in the form of the Discworld’s many witches, including Granny Weatherwax, Miss Treason, Miss Tick, and Nanny Ogg, but also from her kinda sorta boyfriend, Roland, and a band of Nac Mac Feegles, an over-the-top send-up of Scots, every last man jack of them addicted to drinking, brawling, and stealing. Plus (“Crivens!”) they’re purple and all of about one foot high.

Did I mention Horace, the talking cheese?

In crafting Wintersmith, Steeleye Span collaborated directly with Pratchett (whose voice appears on “The Good Witch,” as he recites the qualities of cackling) in order to sequence a song cycle that takes flight from the Wintersmith story, while at the same time expanding and even deepening the prose original. Steeleye also adds material from other books, with the turtle A’Tuin getting its own theme song, and a track that references a hiver, an entity Tiffany encountered in an earlier book, A Hat Full Of Sky.

Steeleye Span turns out to be the perfect choice for musicalizing Pratchett’s humor-driven prose voice. An outfit that started as the most traditional interpreter of extant British folk music, Steeleye has morphed over the years to the point where it has mastered everything from metal to fugues and back again. Dance a Dark Morris? No problem: Steeleye knows the territory well enough to subvert the expected clackety sounds of that ancient spring ritual and deliver something far more dangerous.

Highlights are the threat-heavy “You” and “The Making of a Man,” a Pratchett poem that’s crucial to the outcome of the storyline, now set to music that makes it sound as if it really has been a generations-old children’s rhyme. “We Shall Wear Midnight” vaults entirely free of Wintersmith’s covers and on to its sequel, I Shall Wear Midnight, thus providing a melancholy coda to Tiffany’s unfinished coming-of-age, one that lets her look past her brief romance with the Wintersmith and into the teeth of of her own mortality. It’s beautiful work, exceptional in every sense.

True, Steeleye’s take on Wintersmith cannot be fully understood without having read the book, but then, works like 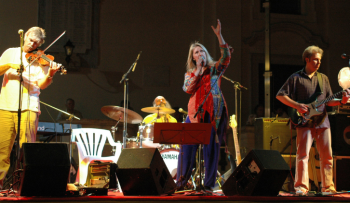 Tommy or The Wall (by The Who and Pink Floyd, respectively) aren’t exactly models of clarity, either. In the age of amplified music, asking the listener to make cognitive leaps seems to be the norm for “opera” and themed albums in general, and in the case of Wintersmith, it doesn’t detract. The album’s songs stand on their own. Fans of Pratchett should not hesitate, for this is an ideal opportunity to explore a musical idiom not often heard outside of Britain and a band that Top 40 radio has unjustly ignored for forty-five years (and counting).

Best not to delay, though. Steeleye’s long run may be coming to an end, as health problems have plagued at least two longstanding members, Bob Johnson and Peter Knight. If Wintersmith proves to be the group’s swan song, it’s a highlight, but it would be a shame if the band did not find a way to continue blessing the world with its music. (For more on Steeleye Span, whose fantasy credentials are rock-solid and include close encounters with dragons, witches, giants, and elves galore, I refer you to a previous post in this infrequent series, “Fantasy Out Loud II.”)

As for Tiffany, Sir Terry reports he’s at work on the next chapter of her adventures, untitled as yet so far as I can discover. No release date has been announced.

Love Steeleye, love the album, and the hint of a new Tiffany Aching book makes me inexpressibly happy.