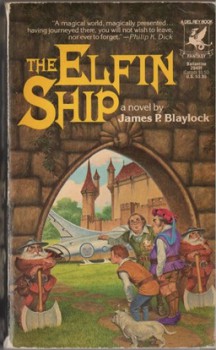 When word comes to the good people of Twombly Town that the traders of Willowwood Village have vanished and the whole town has been abandoned, they are worried there will be no honeycakes from the great dwarf baker, Ackroyd, or elfin toys for Christmas. When the mayor calls for an expedition down the Oriel River to the city of Seaside to procure the cakes and toys from their source, the only man deemed capable of the task is the cheeser, Jonathan Bing. Despite his own misgivings, but to the townspeople’s delight, Bing agrees.

Clearly inspired by Kenneth Grahame’s Wind in the Willows, The Elfin Ship (1982) is James P. Blaylock’s first published novel. Like Grahame’s book, it is a paean to adventure, home comforts, food, and male camaraderie. For those who take note of these things, only one female character makes a brief, wordless appearance and a second is just mentioned. Nonetheless, it’s not set in a world labeled “NO GIRLS!”, but rather one where the men are more interested in a good bottle of ale, good pipe tobacco, and a raft trip down a meandering river than the whereabouts of the absent women.

I’ve loved this book for decades and have read it several times over the years, chuckling each time. I was inspired to pick it up after reading and contemplating M Harold Page’s piece “Why Humorous Fantasy Isn’t Popular” here at Black Gate a few weeks ago. Most of the comedy here is gentle and might even be deemed old-fashioned. If that doesn’t deter you — and I don’t think it should — give The Elfin Ship a read for some good-hearted goofiness.

Jonathan Bing is a stolid man with little experience beyond the warm and comforting confines of his home, but one who has always dreamed of adventure. Among his prized possessions are several well-read volumes by G. Smithers of Brompton Village, with titles like The Tale of the Goblin Wood and The Troll of Ilford Hollow. When Mayor Bastable suggests to Bing he is a “stout enough lad to sail downriver yourself, all the way to Seaside with your cheeses and back again with cakes and elfin gifts,” despite some trepidation, the cheeser decides he is indeed the man best suited for the job.

Initially, Bing’s only companion is to be his dog:

His old dog, Ahab, named after the seventh king of The-Land-Beyond-the-River, was a fat sort of a dog. He didn’t, in fact, look doggish at all. His head seemed much too big for his body and was round as a plate. His eyes, which appeared a trifle piglike, were set off on either side a bit too much  —  as if Ahab had had his face pushed about. He was enourmously fat and was white with speckles of odd shades of gray and brown all over, and he had short little legs. His legs moved wonderfully fast, and could have run rings around any rat in the village bakery. He was, however, on moderately good terms with rats and so probably wouldn’t have run rings around them anyway. 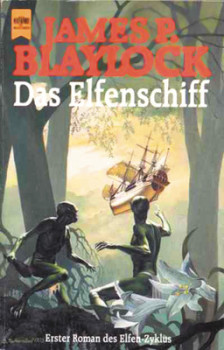 As the two prepare to cast off from the wharf they are suddenly joined by Professor Artemis Wurzle. The professor is as famous as a person can be in Twombly Town for his discovery of a wrecked elfin sailing ship far above the navigable reaches of the Oriel. He’s a man dedicated to research and scientific investigation. He’s just smart enough to reject the possibility of magic while inventing theories like “the third law of stasis and termination” and “the law of accumulation” to explain the reappearance of a hat lost many days before and miles away.

Some hours after embarking on their voyage, the travelers become aware of a fourth companion. Dooly, a “thick but well-meaning lad” has stowed away. He’s given to believing every wild tale he’s told and is constantly telling wilder ones about his grandpa. Together, the three men and the dog sail down the river with the modest hope of trading for cakes and toys but ultimately find themselves ensnared in dangerous maneuvers against a dark force haunting the Oriel River valley.

An evil wizard, the dwarf Selznak, has set himsef up in the castle Hightower that looms over the village of the same name. Armed with a magical watch that allows him to stop time around him, he has been wreaking havoc on the towns and trading posts between Twombly Town and Seaside. He has also riled up the goblins of Goblin Wood who, normally content in their dark, haunted forest, have begun to harass honest folk across the valley. They are mad things, given to random destruction and as satisfied with hurting themselves as others:

Although each was smaller even than a dwarf and thin and bony like a skeleton with a skin of leather stretched over it, Jonathan found it hard to convince himself of the facts. The figures seemed to grow and shrink on the mist like their leaping shadows. One moment they looked like smiling, prancing elves and the next like grim shadows of death with sunken eyes and protruding teeth and ghastly misshapen hands like the claws of crabs.

To the companions’ dismay, their journey is a series of misadventures. At one point a mysterious storm blows up and batters the raft to bits. The seemingly fortuitous arrival of a group of linkmen helps them get their raft repaired:

They all wore pointy hats like elves and had long slender legs and noses and perpetually grinning mouths. They almost always wore short pants and high woolly socks in season and out, and if it weren’t for their size it would be tough to tell them from elves. Elves, of course, are a head or so taller and are altogether too secretive to be strolling along the river singing ridiculous songs.

Restored to the water, they eventually reach Seaside where Bing and Wurzle are immediately drafted by the elves and their linkmen allies to take back the magical watch from Selznak. If the watch, one of the great treasures of the elves, remains in the dwarf’s hands, there is no telling what horrible evils he will bring down on the Oriel valley and even Seaside itself. 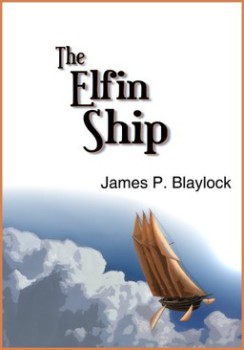 For the plan to succeed, Dooly’s grandpa needs to be found and forced to take part. Bing and Wurzle are startled to learn Dooly’s grandpa is the legendary scapegrace, Theophile Escargot and that most of the boy’s stories about him don’t begin to do justice to his exploits. Escargot, though, has dealt with Selznak in the past and plans to do whatever he can to avoid being drawn into the elves’ plot. Securing his services takes a raid on his secret lair where he’s holed up with his submarine.

And that’s only the first third of The Elfin Ship. The rest is equally stuffed with eccentrics, madmen and monsters. There’s a night march on Selznak’s keep and battles with goblins and skeletons. Even a giant talking ape makes an appearance.

Blaylock’s fiction is fun through and through. The plot is fun in itself, but it’s his cast of characters, joyfully out of step with society, given to riding mad hobbyhorses, or bound up in strange obsessions, a hallmark of Blaylock’s writing, that provides the real fun. Few other authors are going to give readers something like this:

The wizard pulled a sort of tube with a carved ivory baby’s face on top out of his cloak and attached it to the peak of the cap. The whole works balanced there like a flag pole atop a tower. The wizard looked ponderously uncomfortable and began to gasp, finally giving up the effort and holding the cap upright with his hands.

“Frightful nuisance, this, but a wizard needs such props if he’s going to be more than a carnival magician with a deck of cards tied together with string.”

Madcap’s not a word heard much these days, but it’s a great one to apply to the characters and their adventures in The Elfin Ship. From start to finish, Blaylock maintains a high level of inventive goofiness that never lets up. If you want about as great a break as possible from the brutalities and cynicism of much of today’s fantasy, this book is it.

Blaylock went on to pen two more volumes in what eventually became known as the Balumnia Trilogy. I discuss them separately.

In 2002 he released The Man in the Moon, an early, very different version of The Elfin Ship.

I’ve always enjoyed Blaylock. I’ve not read this one yet, although I have a copy. Maybe over the holidays I can work it in.

Sigh. Adding it to the list. When I am ever going to find the time to read it all? And the damned thing keeps expanding.

The Balumnia Trilogy is very different in plot from the rest of Blaylock’s books but just as much fun.

[…] haven’t read Tim Powers’ The Drawing of the Dark, or his buddy James Blaylock’s The Elfin Ship, you need to. The same thing goes for Teresa Edgerton’s delightful Goblin Moon. The most […]