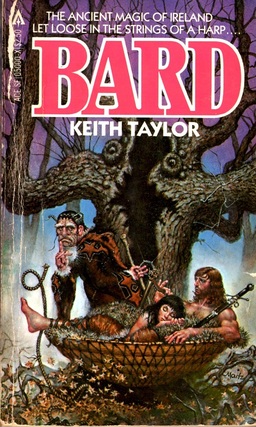 After several weeks spent among ghoulish haunts, a Cthulhu-haunted island, and nightmare dimensions, I thought a trip to ancient Britain — the sun-dappled forests of the High Weald and the rolling downs of the Vale of Kent — was needed. Yes, I’ve visited previously in reviews of Henry Treece’s The Great Captains and David Drake’s The Dragonlord, and Keith Taylor’s Bard (1981) is a return to post-Roman Britain in the days of Arthur and Saxon and Jutish invaders.

Bard is one of those books that my dad bought years ago and I never bothered to read. I didn’t know anything about it or its author, but I was done with my short-lived infatuation with Celtic fantasy. Nothing about it enticed me to pick it up… until I started blogging about swords & sorcery.

As I read articles and websites on heroic fiction, I quickly learned that Keith Taylor was an important voice in the field of Robert E. Howard scholarship and then I started seeing very good reviews of Bard. I remembered that a copy was tucked away in the attic so I went and retrieved it and I’m quite glad I did.

Bard is a fix-up of four previously published stories and one original tale about Felimid mac Fal of Eire, wielder of the magic sword, Kincaid, and player of the ancient harp, Golden Singer. Under the right circumstances, the harp allows him to cast spells and play songs to influence his audience. Blessed with talent, wit, and cunning, Felimid is able to enter the courts of ferocious Jutish warlords and survive encounters with monsters and sorcerers in haunted forests.

Though tied together by a pair of ongoing plots, Bard reads more like the scattered adventures of a peripatetic traveler than a novel. Despite its melancholic setting in a time of fading magic and invaders from across the sea, this book is tremendous fun. Felimid is a bold, lively character with a winning way, well worth any heroic fantasy reader’s time.

Felimid is introduced in “Fugitives in Winter,” hoping to spend Yule in the hall of the Jutish king of Kent, Oisc. Unfortunately, the bard’s clean-shaven face leads to a violent run-in with the king’s most powerful warrior, the berserker and rumored werewolf, Tosti. Tosti loses the fight, but his lust for revenge leaves the Irishman facing almost certain death. Felimid manages to foil Tosti’s plan and escapes with the help of a British slave, Regan, who’d earlier fallen for his charm and looks. 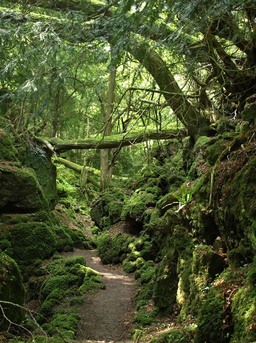 With Oisc and his men in pursuit, the pair of fugitives attempts to find refuge in the heart of the great wood that once covered much of the southeastern part of England. Taylor depicts the ancient wood as a deep place where magic survives cloistered from, first, the disbelieving eyes of the Romans, and then the Christians.

The wilderness of oak, ash and thorn men called the Forest of Andred stretched all around him. He’d seen nothing else for three score days. This forest had existed as it now was before the Saxons had entered Britain…or Caesar’s legions had pressed ashore against Kentish resistance…or even the first iron-using Celts had set foot in the island. Long, long before. Those events covered a mere thousand years. Some individual trees had witnessed them all from seedlings. The forest itself was far older.

Giant spiders, goblin-men, a conniving wizard, and a divine horse all make their appearances in “The Forest of Andred,” the story of Felimid’s and Regan’s further adventures in the magic wood. To survive, all of the bard’s powers of playing, swordsmanship, and cunning are put to the test in this tale.

“My Sendings Return” is Bard’s longest story. Leaving the forest, Felimid seeks shelter from his enemies with friends in the walled British town of Calleva. Within the confining stone walls of the town, Felimid’s magic is weak. The king of Calleva’s son wants him dead, forcing him to be more circumspect than usual. His silver-hilted sword attracts the attention of thieves. With the aid of black magic, it’s stolen out from under him one night.

Felimid’s quest to retrieve Kincaid leads him to the Hampshire Downs, where he meets a dangerous old foe and is hunted by an old friend. The story culminates in a race across the Downs.

The Downsmen tracked them like Fate. They rode the Sun across the sky and deep under the earth, and cantered up the faint new moon. They rested as much as necessary, no more.

Bard’s final stories bring back the berserker, Tosti. The Jutish warrior has never lost his desire for bloody revenge against Felimid. In “The Atheling’s Wife,” he tracks Felimid to the great hall of the legendary Jutish king, Cerdic. Failing to outwit his prey there, he continues to track him northward towards a ruined Roman villa in “Buried Silver.”

Felimid mac Fal is one of the most enjoyable heroes I’ve spent time with in some time. He’s clever and bold and never roguish. He doesn’t aim to kill if it can be avoided and he uses his wits to extricate himself from trouble more often than he does his martial skills.  As skilled and as gifted as he is, he’s not a braggart, thus never wearing out his welcome.

All that might not work if Taylor wasn’t such a good writer. Felimid is genuinely charming. He shows true concern for his friends and makes great effort to not put them at risk on his behalf. He’s not perfect and often acts too boldly for his own safety, but he’s been lovingly and well crafted by his creator.

Taylor’s stories are also suspenseful and exciting. The quotes I’ve pulled have been among the more poetic and evocative, but when he wants to, he can get the reader’s pulse pounding in sync with Felimid’s:

The gelding raced, blind in its abysmal terror. Felimid had no concern to spare it. Nothing mattered but the wolf, the snarling, darting wolf that fell back from his agile weapon-hand time after time, and ever returned. It was a nightmare in which one constantly fends off a thing which cannot be stopped.

Felimid has a tremendous joy for life and song and his world is one of much beauty. But it is also one sliding toward the darkness that will follow the eventual victory of the Jutes and Saxons. The characters don’t know this and many have real hope that Arthur will win lasting victory over the invaders. Only we readers know the outcome. The magic of the Celtic past is fading and the stolidity of the Roman one is being destroyed.

War-boats with twenty pairs of oars apiece, new from their winter quarters, lay moored for fitting at timber jetties. There had been stone quays, once; the Jutes had destroyed them with immense labor, because they feared the Roman magic might linger in them.

While his character is no brooding cynic, the stories take place in a darkening world. The best S&S is imbued with a melancholy, be it over a lost time, having to face the starkness of reality, or the knowledge that one’s actions can’t save the future. His recreation of the last years of light before the blackout of Dark Ages Britain gives the stories a potent resonance.

Bard is a perfect artifact from the glory days of 1970s swords & sorcery. It’s also a perfect antidote for the doorstopper blues. For a long time, my opinion has been that S&S works best as short stories. Taylor’s work here drives that home even more.

There are four sequels, adventurously titled Bard II, III, IV, and V. I have the first three, but the last is available only at insane prices. II is getting added to my TBR stack today.

Fine. One more book to keep an eye out for while browsing used book stores. Thanks a lot Fletcher. If you’re looking for another book featuring a bard, I recommend “The Harp and the Blade” by John Meyers Meyers.

Sorry, Ken, but it’s in my blood to get people to buy more books. I’ll have to find The Harp and the Blade. I remember really liking Silverlock.

I loved “Bard” when I was a kid! I re-bought it, along with the first three sequels, a couple of years ago and was impressed at how well they all held up. I can’t speak to how it all ends, as I haven’t found the last book, but two through four do the nice trick of keeping the original story going while changing it as it goes and creating a really distinct feel.

I think “The Harp and the Blade” is fun, and not dissimilar to the “Bard” books. The setting’s much the same, though with less magic; the writing’s a bit more American pulp, but a good example of that style.

Good to hear the sequels are good and that’s two votes for The Harp and the Blade. When I looked the other day Amazon had Bard V for $92. Sheesh!

I believe Bard V was only ever printed in Australia. I’ve been waiting to get my hands on an affordable copy for years…

Oh man, I got this book and its direct sequel in a huge care package of all my Uncle’s sf&f novels sometime in the mid-90’s. Along with the Moorcock’s and the Wagner’s, this is one I think of every now and again. It’s neat to see forgotten books like this turn up.

That’s the goal – excavate the best of the past.

Keith Taylor is one of the greatest living writers of traditional S&S today, along with Charles Saunders and David Smith. These guys, along with a few others, are the last of a group of writers that started publishing in the 70’s, before S&S died out and was replaced by ‘rainbow hued unicorns’, and other sugar coated garbage. Readers should check out Keith’s other works, like his Kamose series, set in ancient Egypt, and reads much like Robert E Howard’s Weird Tales stuff.