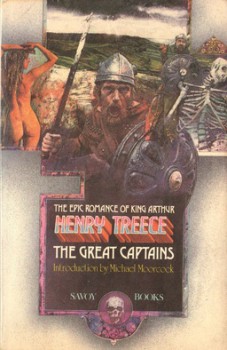 They were great men, yet to see them only as men, stripped of their doom-driven greatness, is to represent them on too trivial a scale. To draw them as massive heroes only would be to recreate them as inhuman cyphers.

from the preface to The Great Captains

The Great Captains (1956) is Henry Treece’s brutal and gripping version of the King Arthur story. Treece has pruned away the romantic embellishments that have obscured the old legend and returned it to the historic time and place in which it might really have happened. Excalibur isn’t buried in an anvil, but a tree stump, and Camelot isn’t a fairy tale castle, but a restored Roman town. Instead of an anachronistic quasi-medieval setting, the story unfolds during the bloody chaos of the waning days of Roman Britain decades after the last legionaries sailed for Gaul.

Britain’s darkest hours came in the Fifth Century AD, when waves of Germanic invaders swept across the English Channel. Stripped of all Roman soldiers in 407 AD, the people of Britain were forced to fend for themselves. In the end, they failed. None of the 1,000 or more prosperous Roman-style villas survived the Saxon onslaught. London, once rich and home to 60,000 people, was abandoned. Starvation and violence covered the land. Yet there were moments of hope.

In the middle of the Fifth Century AD, Ambrosius Aurelianus, a soldier of noble Roman ancestry, rallied the people and raised an army. For years, he fought off the invaders. His success spurred on the British and a generation after his death, the Saxons were routed at the Battle of Badon, securing another generation of peace for the land. According to the Historia Brittonum, written around 828 AD,

The twelfth battle was on Mount Badon in which there fell in one day 960 men from one charge by Arthur; and no one struck them down except Arthur himself.

This is the first historical mention of Arthur. The Historia goes on to document twelve great battles waged by Arthur, dux bellorum (war leader), against the Saxons and their allies. From this, all the great legends of Arthur Pendragon, Once and Future King, arise. And though many historians today have come to doubt he existed, Arthur lives on as the chivalric hero who leads the righteous against a seemingly overwhelming enemy.

The Great Captains is the entwined stories of Medrodus, aide and presumed heir of Ambrosius Aurelianus, and Artos the Bear, son of Uther Pendragon. The book begins with young Medrodus and the blind Ambrosius crossing a devastated Britain in search of refuge and allies in the West. Eventually, they find it at the fort of Uther Pendragon and in the powerful figure of his son, Artos. It ends decades later with Medrodus and Artos together in Camlann, minds lost to old age, settling differences which have lost all meaning and that they can scarcely remember.

Treece’s Britain is a dark and shadowy world where belief in the supernatural is palpable. It exists between the beliefs of the mostly Christian Romano-Celts and the mostly pagan tribal Celts in the West. Everyone abides by omens and prayers and praise. Christianity is faltering because it is seen as tied to fading Rome, while the old paganism is awash in blood and darkness. Men live in fear of whatever deities might rule the heavens or lurk in the forests and are superstitious enough to try to appease them all.

Treece surpasses himself when into this almost tangible world he introduces Artos and Medrodus. By their characters and by their feats, you can understand why they would metamorphose into heroes of mythical proportion. Whether it’s the historical moment that summons them into existence or they are able to bend the times to their will, Artos and Medrodus are the sorts of men who are remembered long after their deaths. For good or for evil, they are the stuff of archetypes.

Artos may be only the leader of a band of wild British cavalrymen, but he is the model of the man on the white horse, the man who brings justice and order. Medrodus, who fulfills the roles of both Mordred and Lancelot, is exemplar of worst betrayer and closest comrade.

Artos the Bear is a dauntless warrior and leader on an epic scale, but he does not overlook little things. When Artos seizes possession of Ambrosius’s emblem of authority, the sword Caliburn, even while savoring the moment, he is aware of Medrodus’s fury at having lost what he believes is rightfully his. In that instant, he offers his friendship to Medrodus. They become blood-brothers and Medrodus is given the Celtic name Medrawt. From that friendship grow horrible events that, as noble as Artos becomes and as great his victories are, ultimately lead to his dream’s collapse.

Medrodus is never a likeable man, but his jealousies and ambitions are almost excusable. He is the only person to stay by Ambrosius’s side after his eyesight is gone and his last soldiers have fled to Gaul. In his own way, Mordred is brave and daring. In a better world, he might have succeeded Ambrosius as Count of Britain. But if Britain is to be restored, she needs a self-denying leader who can make men follow him to their deaths.  The conniving, grasping Medrodus is not that man. Still, as hot as his hatred is for Artos’s taking of the sword and title, he is unable to resist the man’s friendship. His inability to abandon Artos or utterly betray him, even when it might fulfill his own ambitions, leads to his own doom.

Treece is a superb writer. In addition to recreating ancient Britain and creating powerful versions of shopworn characters, he could write with thunder and lightning. There are moments of wonder and stark terror throughout The Great Captains. One of the best passages is about the dread anticipation and champing-at-the-bit excitement Medrodus experiences before a battle. As the Battle of Gein is about to begin, he is waiting with Artos.

Then, almost by his ear, Medrawt shuddered at the sound of the war-horn. Its high-pitched howling rose like the scream of a soul in the torment of eternal damnation. It went on and on until Medrawt was at the point of crying out for it to stop. He began to tremble in every limb now and could hardly breathe with the great surging of blood in his throat. He tore at the bronze ring about his neck. For a moment his eyes clouded and he was blind.

Then, as though he did not know himself any longer, he turned to Artos and smiled at him, drawing back his lips as far as he could. His hands had gone dry. His legs were firm again.

He was the master of his voice. ‘By God, Bear,’ he heard himself say, ‘they shall know what it is to outface Rome now!’

Then he raised his right hand in a high and commanding gesture. The Cymry felt godhead move in their veins at that moment. Then the whole line of horse began to move forward relentlessly down the dark hill. 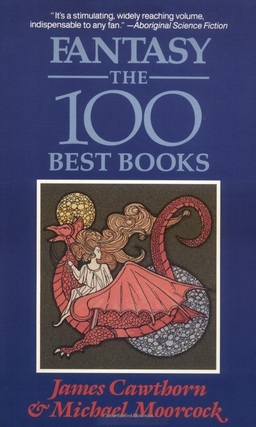 He could also write in subtler shades. There’s only one overtly fantastic scene in all of The Great Captains. Camped outside the ruins of a Roman town, Medrodus is tempted by a phantom with an offer of power and victory over the Saxons. It’s not presented as one for the restoration of Christian Rome, but rather an older native order built on paganism. In a story otherwise lodged entirely in a realistic world, it is a testimony to Treece’s talent that it feels absolutely believable.

Treece does make allusions to many classic Arthurian traditions. Artos’s first wife is Gwenhwyfar, his true love and his half-sister. The other is a Byzantine courtesan name Lystra, whom Artos renames Gwenhwyfar. Legendary Round Table stalwarts Sir Bedivere and Sir Kay are present as ritually scarred Celtic tribesmen Bedwyr and Cei. Even the circular table itself makes an appearance of sorts.

I first read this about fifteen years ago (hipped to it by Michael Moorcock and James Cawthorn’s essential Fantasy: The 100 Best Books) and remember liking it. Rereading it, I think it might be my favorite version of the Arthur legend. I love T. H. White and Howard Pyle. I’ll always watch Excalibur if it’s on. The Great Captains, though, is it. It burns away all the dross, leaving the most basic elements.

Treece makes me believe Artos really existed and, with brave men by his side, brought peace to Britain for a generation. If you have any interest in King Arthur, read this book. If you, like I, think stories rooted in Celtic culture have been murdered by too many witty bards, nature-loving druids, and sly Sidhe, read this book. If you are looking for an exciting tale of heroism and doom by a masterful author, read this book.

Henry Treece wrote dozens of novels. Most are historical fiction, many are for young adults. The Great Captains is the climax of a tetralogy about Britain. The others are The Golden Strangers, The Dark Island, and Red Queen,White Queen. None of his works appear to be in print, though the Savoy Books edition, illustrated by James Cawthorn, is available for reasonable prices on Amazon.

Treece is a sadly neglected writer of historical fiction. His works have been out of print for almost a decade, but are worth the effort of tracking them down.

If you like this kind of thing, I would also strongly recommend Rosemary Sutcliff’s “Sword at Sunset” – which has recently been reissued for the Kindle.

I only discovered him because of Moorcock and Cawthorn. Definitely someone I want to read more by.

I’ve been meaning to check out Sutcliff. Thanks for the info – Just looked at Sword at Sunset and it looks great.

[…] here), and the Tales of King Arthur and his noble knights (examples from the past two weeks here and […]

[…] I react to it the moment I read it. As I’ve recently been reading about King Arthur (see my review on The Great Captains), I was predisposed to like this one. The poem does a better job than most […]

[…] of grimness and realistic grit to the cycle as Henry Treece did in The Great Captains (which I reviewed on Black Gate last year), he turned Arthur into some sort of wickedly charismatic and cutthroat […]

[…] of Kent — was needed. Yes, I’ve visited previously in reviews of Henry Treece’s The Great Captains and David Drake’s The Dragonlord, and Keith Taylor’s Bard (1981) is a return to […]

[…] I reviewed the fourth book, The Great Captains, his down-to-earth vision of King Arthur last year. The other two volumes are The Golden Strangers about the Copper Age settlement of Britain, and The […]