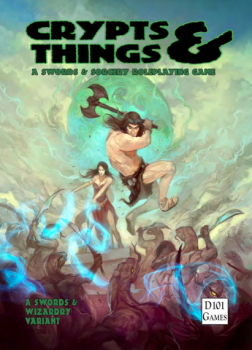 Back in the 70s, when I first started playing Dungeons and Dragons (D&D), I spent a long time wanting a ruleset that would let me recreate the sort of sword and sorcery that I was reading back then.

The setting of D&D did not look like any fantasy world I had read about, but it was clearly influenced by a number of them. There were thieves that might have been Fafhrd and the Grey Mouser. There was a barbarian character class in an issue of White Dwarf that might, if you squinted, have resembled something like Conan.

But D&D did not quite hit the mark. There were also elves and halflings and dwarves and all manner of other things that did not exist in the S&S universes of my particular dreams. There were echoes of Howard and Leiber and Clark Ashton Smith, but they were smudged over with bits of Tolkien and a kind of high fantasy.