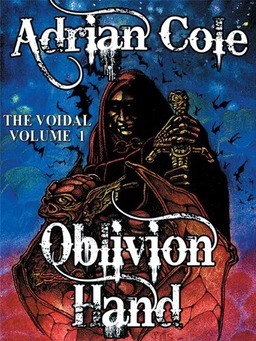 Stripped of all his memories for some great transgression against the Dark Gods, the mysterious one called the Voidal, or Fatecaster, endlessly traverses the dimensions of the omniverse. Always he brings vengeance via his Oblivion Hand, an additional punishment of the Dark Gods. And furthermore, any who aid or befriend him are made to suffer.

Oblivion Hand (Wildside Press 2001) is a fix-up of eight early stories by Adrian Cole about his dark wanderer, the Voidal. Cole’s amnesiac protagonist was introduced in a chapbook titled “The Coming of the Voidal” (in this book reworked and retitled “Well Met in Hell.”) Five more tales appeared in a variety of small magazines and anthologies between 1977 and 1980, including Fantasy Crossroads and the Gerald Page-edited Heroic Fantasy. Two more, “The Lair of the Spydron” and “Urge and Demiurge,” were scheduled to be in Phantasy Digest and Weird Adventures respectively, but both magazines shut down before the stories could be published. They appear for the first time in Oblivion Hand.

In a review I did of the first two stories, “Well Met in Hell” and “The Lair of the Spydron,” I was harsh and almost disdainful. Still, there was something about them that I remember liking. Reading Lin Carter’s Kellory the Warlock last week (and whoever thought a writer most people agree was generally mediocre could attract so many comments a quarter of a century after his death?), elements of it reminded me of Cole’s book. Both authors were intent on creating a setting that wasn’t just another watered down mimeograph of Middle-earth; they wanted something stranger. Carter succeeded, but Cole did immeasurably better.

Cole’s omniverse is an endless collection of interesting settings: universe-sized dimensions; monster-infested pocket worlds; a realm filled not with planets but islands that float in space. Countless arrays of gods rule over these various worlds. Terrible beings like the Spydron create and work their will on hidden places they carve out for themselves. Powerful sorcerers raise themselves up above the gods in other worlds.

In “Well Met in Hell,” we meet the grotesque Rammzurk. Fleeing from the armies of the conquering Csarducts,

Into the very entrails of Phaedrabile he wriggled, creating for himself the nether hell of Sedooc, a labyrinthine kingdom of sorcery. With him he took his repulsive entourage, and they burrowed like maggots in the charnel house of their creation.

Behind it all, the Dark Gods maneuver and manipulate for their own unknown purposes.

For his unnamed sin, the Voidal is drawn from place to place in the omniverse, bringing the judgment of the Dark Gods on other transgressors. Not only has his mind been wiped of his past, his body has been disfigured and his right hand has been replaced with the Oblivion Hand. He arrives whenever and wherever summoned, usually by some unwitting soul, and there the Oblivion Hand detaches itself from his wrist and seeks out the target of the Dark Gods’ wrath and delivers their punishment. In one story it helps a ghost visit revenge on its murderer and in another it transforms itself into a giant monstrous thing that scuttles and kills its way through the dark corridors of an abomination-filled castle. 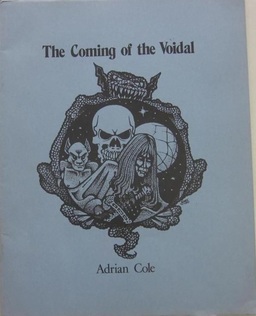 While written as individual stories, each tale of the Voidal in Oblivion Hand is linked. Together they chronicle the partial awakening of the Voidal’s memory, his gaining an ally — the cunning “batrachian” familiar Elfloq — and his setting out on the road to knowing who he is and restoring some control over his destiny.

Oblivion Hand is a study in sensory overload. For each story, Cole created a new world, this one horrible, that one beautiful, every one a unique creation without an Earthly antecedent. Cole has a special love for monstrous settings and characters similar to those of Clark Ashton Smith or Michael Shea’s Nifft the Lean stories. But he writes without the drugged dreaminess of Smith or the sly wit of Shea. For all the monstrous villains and suffering souls in Oblivion Hand, it lacks the despair present in the other two writers’ works.

The Voidal approaches the heroic on several occasions and there is a beautiful moment of transcendent victory in the final story, “Ever the Hungry Night.” This is technicolor Cinemascope craziness that deserves to be memorialized by Frank Frazetta or Ken Kelly on a metal album, then repainted on the side of a van.

“The Ocean of Souls” is set in the place where the dead travel before being reincarnated. Necral, appointed by the gods, rules over this land from the fortress, Skull Keep:

{…the castle} has the vast skull head of a man and the body of a naked giant, reclining lifelessly in the emptiness that surrounds it as though drowned: it is the body of an old, deceased god, though it is preserved in its state for eternity, sorcerously embalmed, perhaps, and set to drifting in the Ocean of Souls. Within its immeasurable proportions, riddled with halls and cells, are the secret places of Necral, Keeper of the Ocean, where the chosen dead await their rebirth.

Not all the worlds visited in Oblivion Hand are ugly. In “First Make Them Mad,” we journey to one of the most important worlds of the Csarducts:

Moonwater, entirely coated in a phosphorescent ocean of living matter, harboured the great citadel of Quellermondel, which had been artificially grown from the green mooncoral of the planet’s ocean over a period of countless millennia. Seven aquamarine moons dominated the Dryunic skies and looked ever down on Moonwater, where the bright ocean reflected in iridescent splendour the emerald glow of the heavens.

Cole doesn’t only write with the dials set to eleven, it’s just that most of the time that’s what’s appropriate. When he needs to, he can turn the volume down and deliver something like this:

Yet there was a solitary god who dwelt in Nyctath, loath to leave, being convinced in his dotage that one day the gods would come again to his shunned realm. This lonely god, whose years equalled in number the very stars of the omniverse, burned and tended the light in Nyctath, and by its ever-dimming radiance set the false dawn and dusk of the scattered worlds. This ancient god, Ozbaak Underaak, dwelt in the mountainous retreat of Nacramonte on a clinker world that had lost its own name; here he sought to restore light, dreaming that one day he would make incandescent the heavens and spread a celestial glow throughout the entire dimension of Nyctath. 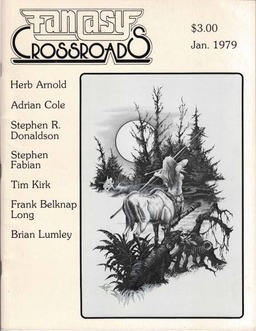 I feel like when I first got back to swords & sorcery several years ago, I was reluctant to allow myself to just enjoy certain books. Books like Oblivion Hand, with their violently purple prose and non-stop insanity were a little suspect. John Clute’s Encyclopedia of Fantasy dismisses the Voidal stories as “not serious.” While I said in my old review that I disagreed with Clute’s evaluation, I realize now I sort of believed it to be true. As I’ve read more and have made an effort to understand why I like or dislike certain books, I’ve also become willing to allow some books to work on their authors’ own terms.

These stories are many, many things. They are colorful, exciting, and clever. They are bits and pieces of separate stories seamlessly woven together by their author into an epic tale — in only 224 pages! What they are not is “not serious.”

Is this book something that will change your life? No, but then most books won’t. What Oblivion Hand will do is take you on an excursion into numberless exotic dimensions, painted with an original creativity too rare in fantasy fiction. Sure, the writing is over the top sometimes. So what? These are stories about wizards, flying islands, and castles carved from the bodies of dead gods. There are times that timid prose just doesn’t cut it.

There are two sequels, The Long Reach of Night and The Sword of Shadows. Both are on my Kindle just waiting to be read. All three are available in cheap e-book form with nice introductions from Cole himself.

We were talking about this briefly on Goodreads. This is what drives me crazy about most contemporary fantasy — it’s way too limited in scope; many authors barely even leave Renaissance Festival territory, much less set out on a jaunt into the weirder corners of the multiverse. But I keep hoping …

Yeah, for all the taboo breaking and whatever going on in modern fantasy, too little heads in wild, original directions. But yeah, I keep hoping, too.

[…] year I reviewed (quite favorably, after an initial aversion to it) The Oblivion Hand (2001), the first collection […]

[…] come to the end of the Voidal’s saga. For a series I have already called favorably “a study in sensory overload,” and “excessive, over the top, and incredibly phatasmagorical,” author Adrian […]