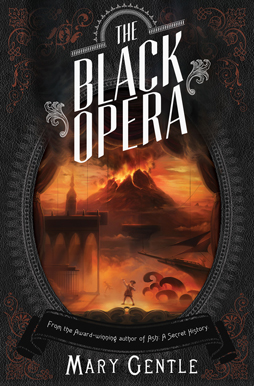 Two years ago, veteran author Mary Gentle’s most recent novel The Black Opera was published to mixed reviews. Some liked the book’s mix of alternate-history fantasy and comic-opera theatricality — as the sub-title has it, “a novel of Opera, Volcanoes, and the Mind of God.” Others, ably represented at Black Gate by Sean Stiennon’s review, found the pacing was slack, the fantastic elements underdeveloped — particularly with regard to how they affected the setting — and, perhaps especially, that the drama was undermined by a lack of conflict among the characters. Having just read the book myself, and having greatly enjoyed it, I felt like putting forward a few thoughts in the novel’s defence. Oddly, I don’t so much disagree with many of the criticisms as think that in context they actually work to make a pleasant, effective story.

First, let’s be precise about what we’re looking at. The Black Opera‘s set in the early-to-mid nineteenth century in a world where miracles happen: inconsistent but often startlingly powerful violations of physical laws that seem to be related to powerful musical performances. Ghosts and the walking dead are not uncommon. In Naples, a freethinking opera librettist named Conrad Scalese is saved from the Inquisition by agents of King Ferdinand II, who conscripts Conrad into a secret project: combating a secret society of Satanists who plan to invoke a miracle that will raise Satan and destroy Naples. They will do this by staging a Black Opera — so Conrad, on Ferdinand’s behalf, must create a countering ‘white opera’ to overcome their evil plan. The book follows Conrad’s frantic attempts to create and stage his opera on a tight timetable, introducing and setting up characters and subplots before an extended climax brings everything to a dramatic head. 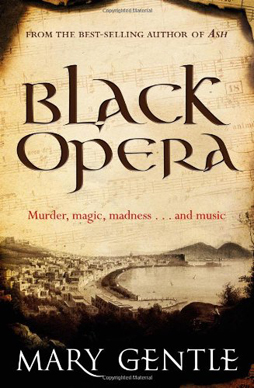 The southern Italian setting’s evoked nicely and the alternate-history details are smoothly worked into the overall tapestry of the tale. It effectively creates the sense of the book itself as a comic opera with a comic-opera setting (even the ludicrous uniforms of the local soldiers are mentioned, in true comic-opera style). The changes in history aren’t specified, but they don’t need to be. On the one hand, opera buffa’s not known for fidelity to fact — we see Conrad writing a story around Cortez in the Americas with not the slightest concern for what actually happened — and on the other hand we have the catch-all explanation of sporadic ‘miracles’ to explain why things aren’t quite as we might expect them to be. Those ‘miracles’ are linked to musical performances; since European musical traditions had so much to do with the Church, historically they’ve often been invoked by sacred music, hence their ascription to the hand of God. One might expect them to have gone uninvestigated up to a point. And it does seem that there is no immediately obvious linkage between the nature of a performance and the result, in the sense that there’s nothing that can be easily observed and quantified about the miracles; no laws or explanations are given at any point in the book, beyond a few theories.

So the reader must allow for mystery, and for things not to be explained. For the magical to be truly magic: unexpected, and oddly frustrating. ‘Frustrating’ because it shapes the plot in ways beyond the control and understanding of the main characters. And the ending is (I think deliberately) a very real kind of deus ex machina. But I don’t feel any of these things represent flaws. I think firstly that comic operas often use improbable twists of fate to arrange their plot, and indeed Gentle is not sparing in constructing this book with a full set of dramatic coincidences. But I think as well that much fiction revolves around characters struggling against nature, against fate, and I think that the miracles of this book belong in that category. It’s a way of presenting magic and fantasy that is perhaps underused: not as a lubricant for plot, not as the product of pseudo-scientific ‘laws,’ not even as a source of dramatic imagery, but as a way to bring out the theme of the book through unpredictable events over which the characters have little or no power. Magic as Moby Dick, if you like.

Stylistically, the book’s smooth and direct, eschewing any attempt at ‘period’ dialogue in favour of contemporary-sounding colloquial speech (again, in keeping with the opera model). It sticks with Conrad’s limited third-person perspective, but Gentle does interesting things in the way she moves in and out of his head and sometimes drops into the present tense to highlight particular moments. For example:

Conrad took a breath deep enough to bring him, under the smell of the sea, the scent of smoke from innumerable chimneys. A few hundreds yards away is brawling, bubbling Naples, outside the walls of the Palazzo Reale. Even here, he could hear the calls of the sellers of pollanchelle — Indian corn attached to the stem and boiled — and the vendors of iced water and aniseed candy. And the shouts and insults of some quarrel that will not quieten down until long after both parties (and their families, and their friends) are back in their own houses.

I’ve hardly been back long enough to consider it home.

The latter two lines are both Conrad’s internal reflections, with the difference in italics representing subtly different distances between the narration and Conrad’s thoughts. It’s a very effective technique and works well with the moments, as in the second sentence of the first paragraph, where Gentle uses present tense: a heightening of awareness, a step outside of time, a kind of intrusion of the eternal mirroring the intrusion of miraculous powers into the world of the novel. Much of the effectiveness of the book lies in its ability to get inside Conrad’s head, and that movement from outward to in is remarkably well-handled. 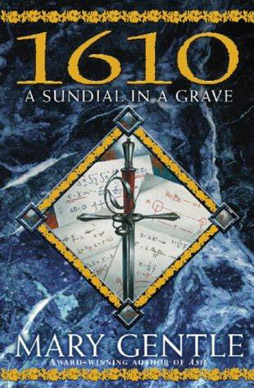 Similarly effective, I feel, is the way Gentle handles dialogue, and the way it’s interspersed with description, memories, and internal monologue. Not only is the back-and-forth of the characters well-handled, but exposition’s handled nicely; the ways by which information’s conveyed to the reader are nicely varied and well-judged. In some ways, though, this does lay the novel open to criticism — much of the book, in one way or another, is taken up with conversation, which I suspect helps create the sense of leisurely pacing.

My feeling was that this didn’t hurt the novel at all. I thought that The Black Opera’s leisurely pacing was deliberate and effective; that it had, up until the extended climax, a lightness of touch that mimicked the operas that inspired the story. The novel maintains an air slightly farcical and yet utterly straight-faced. There’s a conscious artificiality, I think apparent as well in the way the book treats its miracles and ghosts, which is anchored in something real in the approach to character. Yes, the presence of miracles hasn’t changed much historically or been coherently investigated, and yes the presence of ghosts seems merely to result in characters unimpressed with the presence of the dead; that’s the point. These things are reminders that we’re in a story, and a specific kind of story.

Similarly, I think it’s true that Conrad’s interactions aren’t marked by conflict. But then it’s important not to confuse ‘conflict’ with ‘story.’ And far better to have no conflict than to have false conflict; conflict for its own sake distracts from story. Better to let conflict develop organically and emerge from a given situation with given characters. So it is for this book, which begins slowly and builds to a towering climax. 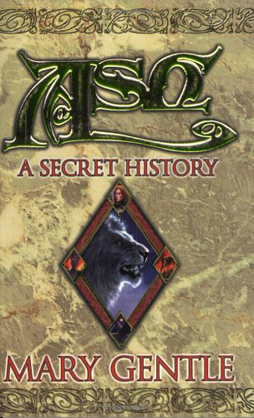 Perhaps it’s appropriate that the book allows its characters to work harmoniously; the theme of the book, as I read it, is harmony. It’s about artistic creation and group artistic creation. Conrad has a prickly relationship with his composer, and the two men must learn to work together to stage their opera. The opera as a whole is a group effort, a series of problems for which solutions must be found. And these solutions must be found within the level of ability of the various singers, musicians, and craftsmen involved. The lack of conflict, then, is the point.

It’s perfectly fair to say that that’s a risky narrative strategy. But for me it works; it’s a story about art and the emergence of art. More, it goes a step further to parallel the emergence and creation of art with the emergence of the divine. I’m not sure it’s credible as theology, but as an image of the sense of meaningfulness of art, it’s perfectly appropriate and effective. Risky as it may be, I’m not sure this story could have been told in any other way.

For, in the end, this is a story about opera that glories in using the devices of opera. It would be mistaken, I think, to view it as a story of an artist whose life is shaped by his art. I think it’s a piece of art that knowingly shapes itself according to the conventions of a given form, in this case comic opera. There’s all the panoply of devices that you’d expect in one of these comedies: humorous dialogue, but also conspiracy, frantic running-about, betrayal, women dressed as men, love both happy and unhappy, servants wiser than their masters, and, in the end, a happy ending — even for the wicked.

My tastes in opera range more to the Wagnerian than to opera buffa, but I enjoyed The Black Opera quite a bit. It’s a well-wrought novel, that moves lightly along its way and builds to a strong conclusion. It’s highly conscious of its own devices, witty without being overstated about its own cleverness. A pleasure to read, it does something different with fantasy, something unique. It may not be to everyone’s taste, but for some of us it’s a fine performance.