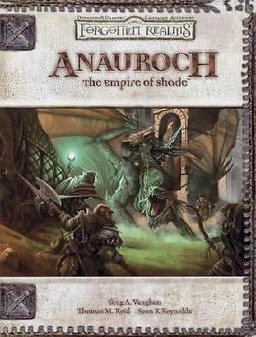 Back in April, I wrote a brief article on the Third Edition D&D supplement Cormyr: The Tearing of the Weave, which I purchased for $7 at the Spring Games Plus Auction. While I was delighted with it, I soon discovered it was the first installment in an epic three-part mega-adventure known informally as The Forgotten Realms Trilogy. Bummer!

Fortunately, I also discovered the second installment buried in the second box of auction loot, apparently purchased during an episode of auction fever for just $6. I examined Shadowdale: The Scouring of the Land in a blog post last month.

That just left chapter three: Anauroch: The Empire of Shade, published in November 2007. While copies of Cormyr and Shadowdale are both still available online at relatively reasonable prices, not so for Anauroch — new copies start at around $60 at Amazon and eBay, and there wasn’t one in the boxes I brought home from the auction (I checked). The first two volumes cost me just $13, but it looked like I was going to spend five times that to get the third one.

Luckily, my house rests on top of a Cave of Wonders, a labyrinthine game repository containing thousands of D&D artifacts dating back to antiquity. I mounted an expedition — with a flashlight, a map, and water for several days — and before too long I unearthed a brand new copy of Anauroch: The Empire of Shade, which I apparently purchased some time in 2009. (Alongside it, covered in a light layer of dust, were brand new copies of both Cormyr and Shadowdale, which I hastily replaced and pretended I hadn’t seen. The fewer duplicate purchases I have to confess to my wife, the better.)

Like the lands of Cormyr and Shadowdale, Anauroch has a rich history as part of the Forgotten Realms. Do a Google search on “Anauroch” (like I did 20 minutes ago) and you’ll find about a gazillion desert maps. Also known as The Great Sand Sea, Anauroch is a magical desert in northern Faerûn. Its drifting sands conceal the ruins of the ancient and powerful Netherese Empire. Their flying fortresses fell into the sand nearly 2,000 years ago, in an age when all magic failed. Ever since, the greatest desert in the Forgotten Reams has steadily expanded, gradually devouring one bordering nation after another.

Anauroch was featured in a 1991 game supplement by Forgotten Realms creator Ed Greenwood, with cover art by Brom and interior art by Valerie Valusek.

Slade and Jim Butler detailed Anauroch’s ancient empire in Netheril: Empire of Magic, a classic boxed set from Wizards of the Coast, released in November 1996. 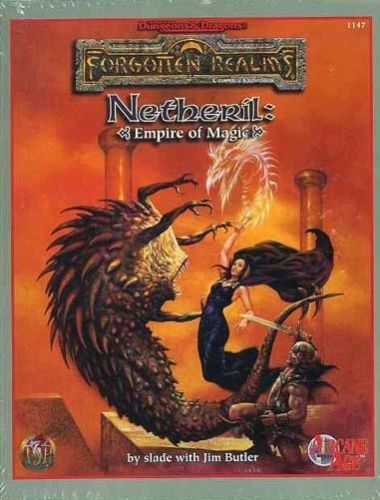 With all that history, there was plenty to draw from by the time Third Edition writers decided to do their first Anauroch supplement. Here’s the back cover copy for Anauroch: The Empire of Shade.

A Shadow Has Fallen over Faerûn

As malign forces conspire to undo the Weave and replace it with the Shadow Weave, the Great Desert of Anauroch begins to change. Unless something is done, all of Faerûn will soon feel the dark might of the greatest magical empire since Netheril.

This adventure is the climax of a three-part series set in the Forgotten Realms campaign setting. It can also be played as a stand-alone adventure. In addition to encounters, this book contains detailed source material on the realm of Anauroch, home of ancient Netherese ruins and the Empire of Shade.

Of course, like all good closing acts in Dungeons & Dragons, Anauroch ends up underground. It also makes liberal use of the excellent Third Edition accessory Standstorm, which we reviewed in a few years back in the print edition of Black Gate. Sandstorm is an excellent resource for desert-themed adventuring and I recommend it highly — and I’m very glad to see the concepts and style of play it advocates brought to culmination with Anauroch.

Anauroch is an adventure for characters of level 9-13, which means that if your player characters start with Cormyr (recommended for characters of level 4-7), you can expect the entire 3-part supermodule to bring your players from level 4 all the way to 13… pretty impressive. All three chapters have been written to be standalone, so you don’t need the others to play each of the individual pieces. But all three — and especially Anauroch — are closely tied to the history and setting of the Forgotten Realms, so don’t expect to easily transplant them into your home-grown campaign without considerable effort.

So far, we’ve covered five Third Edition Forgotten Realms products, most of them from the Spring Games Plus Auction:

Anauroch: The Empire of Shade was written by Greg A. Vaughan, Thomas M. Reid, and Sean K. Reynolds, and published by Wizards of the Coast in November 2007. It is 160 pages in full color, priced at $29.95 in hardcover. It is currently out of print and there is no digital edition. I bought my copy new in 2009 for $10.91.

[…] The adventure that begins in Cormyr: The Tearing of the Weave and continues in Shadowdale: The Scouring of the Land concludes in Anauroch: The Empire of Shade. […]

Sounds like someone needs to start a what i own database. or at least an excel sheet.

Good thinking. Except the bulk of my game collection has been in storage in my crawlspace for around 15 years… meaning that for most items it’s more cost effective to buy a new copy, than to spend the 3-4 hours searching for it. 🙂