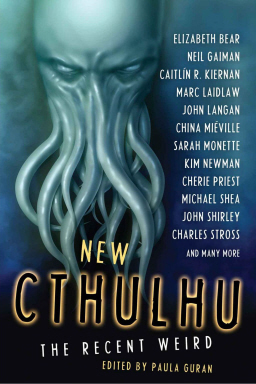 My birthday was last month, and one of the gifts my children bought for me (my children! That’s sweet. And a little disturbing) was Paula Guran’s 2011 anthology New Cthulhu: The Recent Weird. Yes, I do realize the book is very nearly three years old and a bit long in the tooth to be a “New Treasure,” but I’m still so touched that my kids got me a Cthulhu anthology that I’m going to overlook it.

For more than 80 years H.P. Lovecraft has inspired writers of supernatural fiction, artists, musicians, filmmakers, and gaming. His themes of cosmic indifference, the utter insignificance of humankind, minds invaded by the alien, and the horrors of history — written with a pervasive atmosphere of unexplainable dread — remain not only viable motifs, but are more relevant than ever as we explore the mysteries of a universe in which our planet is infinitesimal and climatic change is overwhelming it.

In the first decade of the twenty-first century the best supernatural writers no longer imitate Lovecraft, but they are profoundly influenced by the genre and the mythos he created. New Cthulhu: The Recent Weird presents some of the best of this new Lovecraftian fiction — bizarre, subtle, atmospheric, metaphysical, psychological, filled with strange creatures and stranger characters – eldritch, unsettling, evocative, and darkly appealing.

This is only the latest Paula Guran anthology to catch my eye, following The Year’s Best Dark Fantasy & Horror 2013, Season of Wonder, and the marvelous Weird Detectives. Some of her recent anthologies we’ve covered include:

New Cthulhu: The Recent Weird was edited by Paula Guran and published by Prime Books in November 2011. It is 528 pages, priced at $15.95 in paperback and $6.99 for the digital edition. The cover is by Rafael Tavares.

John, if you look through your email you might have an even newer Lovecraftian review laying around somewhere. 😉

I can’t read my e-mail until I open all my birthday gifts! 🙂