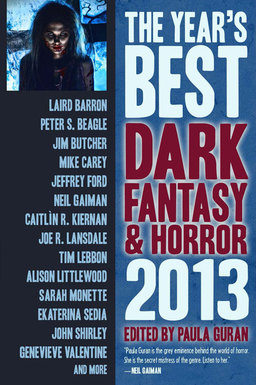 You don’t have time to keep up on all the great work produced in the fantasy and horror fields, year after year.

You may think you do. But trust me, you don’t. There are fantastic new novelists emerging all the time — folks like Laird Barron, Theodora Goss, Genevieve Valentine, and Ekaterina Sedia — and new masters of the short story, like Karen Tidbeck, Ken Liu, Rachel Swirsky, Mike Carey, and many others. How are you going to keep up?

Believe it or not, that’s not a rhetorical question. I have the answer right here: Paula Guran’s indispensable annual collection The Year’s Best Dark Fantasy & Horror. It’s like a cheat sheet covering all the exciting new — and established — writers in the genre. Read it every year, and I guarantee you’ll be talking intelligently about the latest literary trends in dark fantasy at your next party. (You’re on your own picking out what to wear, though. Just remember: no white after Labor Day.)

Paula Guran doesn’t provide the lengthy annual summary typical of some Year’s Best collections. Instead she gives the space over to fiction — over 500 pages of the best short stories of 2013, culled from magazines like Beneath Ceaseless Skies, Postscripts, Cemetery Dance, F&SF, Clarkesworld, Subterranean, Lightspeed, Apex, and Shimmer, and anthologies like The Book of Cthulhu 2, Hex Appeal, Shotguns v Cthulhu, Dark Tales of Lost Civilizations, Black Wings II, and many others.

This is the fourth volume of The Year’s Best Dark Fantasy & Horror, but the first one I’ve gotten around to. In our defense, we’ve at least covered several of Paula’s other recent anthologies, including Season of Wonder and Weird Detectives.

The darkness creeps upon us and we shudder, or it suddenly startles and we scream. There need be no monsters for us to be terrified in the dark, but if there are, they are just as often human and as supernatural. Join us in this outstanding annual exploration of the year’s best dark fiction that includes stories of quiet fear, the utterly fantastic, the weirdly surreal, atmospheric noir, mysterious hauntings, seductive nightmares, and frighteningly plausible futures. Featuring thirty-five tales from masterful authors and talented new writers sure to make you reconsider walking in the shadows alone…

And here’s the complete Table of Contents, listed alphabetically by author

Thanks for the tip! So far, Genevieve Valentine’s “Armless Maidens of the American West” is my favorite story in this collection — it’s a brilliantly haunting, and very understated, fantasy… not quite Alternative History, but it has that flavor, too.

Clearly I need to check out Theodora Goss’s “England Under the White Witch” too. Gaaaahh — so much to read, so little time.

[…] is only the latest Paula Guran anthology to catch my eye, following The Year’s Best Dark Fantasy & Horror 2013, Season of Wonder, and the marvelous Weird […]

[…] that short list. I sampled the fourth volume of her Year’s Best Dark Fantasy & Horror back in February, and was very impressed. The fifth volume arrived this summer, with an absolutely stellar line up […]