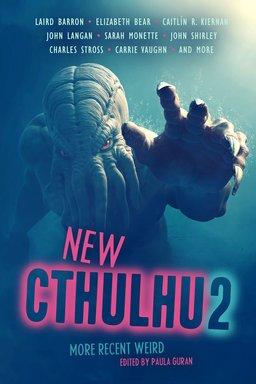 Last month I did a quick survey of Prime Books, looking at 24 volumes in their recent catalog. And an impressive lot it was, too (and trust me when I tell you, after 20 years in this industry, I don’t impress easily.)

One of the more intriguing books in their catalog was Paula Guran’s anthology New Cthulhu: The Recent Weird, which my kids bought me for my birthday last year (Isn’t that sweet? I have children who give me anthologies of Lovecraftian horror to celebrate my birth. Just nod and agree, it’s better for everyone.) It contained no less than 27 Cthulhu Mythos tales, all written this century, including stories from Neil Gaiman, Charles Stross, Marc Laidlaw, Laird Barron, Paul McAuley — and even Michael Shea’s chilling novelette “Tsathoggua,” first published right here at Black Gate.

So I was very pleased to see that a follow up volume, New Cthulhu 2: More Recent Weird, with stories from Laird Barron, Caitlín R. Kiernan, John Langan, John Shirley, Simon Strantzas, Helen Marshall, Michael Shea, Carrie Vaughn, Charles Stross and many others, is on the schedule for later this month.

Many of the best weird fiction writers (and creators in most other media) have been profoundly influenced by the genre and the mythos H.P. Lovecraft created eight decades ago. Lovecraft’s themes of cosmic indifference, minds invaded by the alien, and the horrors of history – written with a pervasive atmosphere of unexplainable dread – are more relevant than ever as we explore the mysteries of a universe in which our planet is infinitesimal and climatic change is overwhelming it. A few years ago, New Cthulhu : The Recent Weird presented some of the best of this new Lovecraftian fiction from the first decade of the twenty-first century. Now, New Cthulhu 2: More Recent Weird brings you more eldritch tales and even fresher fiction inspired by Lovecraft.

Paula Guran has been doing splendid work at Prime and other place. Some of her recent anthologies we’ve covered include:

New Cthulhu 2: More Recent Weird was edited by Paula Guran and will be published by Prime Books on March 24. It is 480 pages, priced at $16.95 in paperback. No word yet on the digital edition. See more details at Paula Guran’s website.

See all of our recent reports on upcoming books here.

I bet the primary will be… interesting.