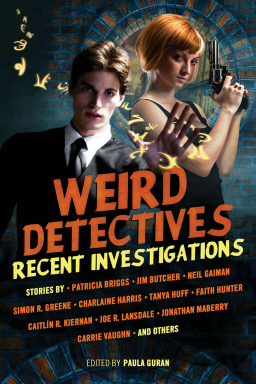 The book in question is Weird Detectives: Recent Investigations, a fat anthology of modern fantasy reprints (nothing older than 2004) edited by Paula Guran, focusing on the new generation of occult detectives and paranormal investigators.

We love occult detectives at Black Gate — witness all the recent attention to the classics of the genre, including Josh Reynolds’s encyclopedic Nightmare Men series, William Hope Hodgson’s Carnacki The Ghost Finder, the short fiction of Joseph Payne Brennan, Manly Wade Wellman’s Complete John Thunstone and Silver John stories, and many, many others.

But it never occurred to me that people were still writing the stuff, despite the resurgence in urban fantasy over the last decade. This is why Paula Guran is a genius. She never lost sight of the thread connecting the pulp classics and the work being done in the same mold today by Neil Gaiman, Elizabeth Bear, Jim Butcher, Joe R. Lansdale, Carrie Vaughn, P.N. Elrod, Bradley Denton, Tanya Huff, Jonathan Maberry, Patricia Briggs, Faith Hunter, and many others. Here’s an excerpt from her excellent introduction:

Ghosts appear to Harry Escott in Fitz-James O’Brien’s short story “The Pot of Tulips,” published in Harper’s New Monthly Magazine of November 1855… In 1859 Escott appeared again (in O’Brien’s “What Was It? A Mystery,” also published in Harper’s) and is attacked by a supernatural entity that is, itself, the mystery.

The occult detective had been born. Also known as psychic detectives or ghost hunters, they were more often portrayed as scientists or learned doctors than as true detectives. Rather than dealing with human crimes, these investigators were involved in cases dealing with ghosts, malevolent spirits, arcane curses, demons, monsters, and other supernatural events and entities… A number of these sleuths made appearances in late nineteenth and early twentieth century fiction.

Wisely enough, she also gives Marvel Comics’ Tomb of Dracula and Buffy the Vampire (and its spin-off, Angel) due credit for the modern resurgence in the occult detective genre. The only major modern ghost hunter she overlooked was Kolchak the Night Stalker (and that almost seems apt, somehow. Poor Kolchak, he never got any credit.)

Guran collects nearly two-dozen stories to compile what appears to be a fairly thorough survey of the best modern occult detectives — including more than a few featured in popular novels, like Jim Butcher’s Harry Dresden, Tanya Huff’s Tony Foster, Charlaine Harris’s Dahlia Lynley-Chivers (from the Sookie/True Blood books), Carrie Vaughn’s Jesi Hardi (the Kitty Norville novels), and many others.

Paranormal investigators. Occult detectives. Ghost hunters. Monster fighters. Humans who unravel uncanny crimes and solve psychic puzzles; sleuths with supernatural powers of their own who provide services far beyond those normal gumshoes, shamuses, and Sherlocks can. When vampires, werewolves, and things that go “bump” in the night are part of your world, criminals can be as inhuman as the crimes they commit, and magic can seep into the mundane – those who solve the mysteries, bring justice, or even save the world itself, might utter spells, wield wands as well as firearms, or simply use their powers of deduction. Some of the best tales of the last decade from top authors of the 21st century’s most popular genres take you down mean streets and into strange crime scenes in this fantastic compilation.

Introduction, Paula Guran
“The Key” by Ilsa J. Blick
“The Nightside, Needless to Say” by Simon R. Green
“The Adakian Eagle” by Bradley Denton
“Love Hurts” by Jim Butcher
“The Case of Death and Honey” by Neil Gaiman
“Cryptic Coloration” by Elizabeth Bear
“The Necromancer’s Apprentice” by Lillian Stewart Carl
“The Case of the Stalking Shadow” by Joe R. Lansdale
“Hecate’s Golden Eye” by P.N. Elrod
“Defining Shadows” by Carrie Vaughn
“Mortal Bait” Richard Bowes
“Star of David” by Patricia Briggs
“Imposters” by Sarah Monette
“Deal Breaker” by Justin Gustainis
“Swing Shift” by Dana Cameron
“The Beast of Glamis” by William Meikle
“Signatures of the Dead” by Faith Hunter
“Like a Part of the Family” by Jonathan Maberry
“Fox Tails” by Richard Parks
“Death by Dahlia” by Charlaine Harris
“Sherlock Holmes and the Diving Bell” by Simon Clark
“See Me” by Tanya Huff
“The Maltese Unicorn” by Caitlín R. Kiernan

I struggled with the Carnacki stories. Just didn’t like them much. I am much more a fan of Hesketh Prichard (and mother)’s Flaxman Low, an under-appreciated occult detective from the same era.

I must admit I’ve never heard of Flaxman Low, but you’ve certainly got me intrigued. Are there any (reasonably) accessible reprints I could lay hands on?

[…] previous anthologies include a wide range of nifty titles, including the altogether splendid Weird Detectives, and Vampires: The Recent Undead, New Cthulhu: The Recent Weird, Ghosts: Recent Hauntings, After […]

[…] Thunstone and Silver John stories, and Paula Guran’s terrific recent anthology Weird Detectives – and deservedly so. This has been a year of terrible weather and when it’s cold, […]

[…] Weird Detectives edited by Paula Guran The Son of Satan from Marvel Comics The Dance of Death by Algernon Blackwood The Casebook of Sexton Blake, edited by David Stuart Davies The Black Veil & Other Tales of Supernatural Sleuths, edited by Mark Valentine The Madness of True Detective Sgt. Janus Returns by Jim Beard The Yard by Alex Grecian The Casebook of Carnacki The Ghost Finder by William Hope Hodgson The Shapes of Midnight by Joseph Payne Brennan The Complete John Thunstone by Manly Wade Wellman The Silver John stories by Manly Wade Wellman […]

[…] This is only the latest Paula Guran anthology to catch my eye, following The Year’s Best Dark Fantasy & Horror 2013, Season of Wonder, and the marvelous Weird Detectives. […]