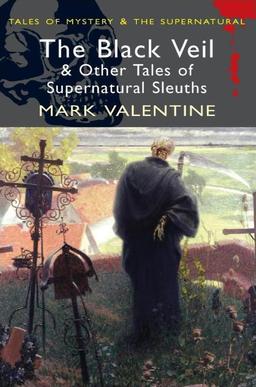 I love these Wordsworth Tales of Mystery And The Supernatural volumes. They’ve compact, attractive, and inexpensive — they look great on the shelf, and they make quick reads. Plus, they’re just so darned collectible.

My latest acquisition is already one of my favorites. We’ve paid a lot of attention to Supernatural Sleuths at Black Gate over the years, from William Hope Hodgson’s Carnacki The Ghost Finder to Manly Wade Wellman’s John Thunstone and Silver John stories, and Paula Guran’s terrific recent anthology Weird Detectives — and deservedly so. This has been a year of terrible weather and when it’s cold, dark, and blustery outside, the best antidote is to curl up with a cozy blanket and a warm beverage, and share the adventures of an intrepid occult detective.

Our real expert is Josh Reynolds, who over the last few years has covered many of the most famous literary examples in his series on The Nightmare Men — from Sheridan Le Fanu’s Dr. Martin Hesselius to Aylmer Vance, The Ghost-Seeker; from Manly Wade Wellman’s stalwart Judge Keith Hilary Pursuivant to Seabury Quinn’s always resourceful Jules de Grandin.

Looking back over all those articles, you may just find yourself more than a little curious. But where to start? Why not start with Mark Valentine’s generous collection of some of the best short stories featuring some of the greatest  supernatural sleuths in all of literature?

The Gateway of the Monster… The Red Hand… The Ghost Hunter

To Sherlock Holmes the supernatural was a closed book: but other great detectives have always been ready to do battle with the dark instead. This volume brings together sixteen chilling cases of these supernatural sleuths, pitting themselves against the peril of ultimate evil.

Here are encounters from the casebooks of the Victorian haunted house investigators John Bell and Flaxman Low, from Carnacki, the Edwardian battler against the abyss, and from horror master Arthur Machen s Mr Dyson, a man-about-town and meddler in strange things. Connoisseurs will find rare cases such as those of Allen Upward s The Ghost Hunter, Robert Barr s Eugene Valmont (who may have inspired Agatha Christie s Hercule Poirot) and Donald Campbell s young explorer Leslie Vane, the James Bond of the jazz age, who battles against occult enemies of the British Empire. And the collection is completed by some of the best tales from the pens of modern psychic sleuth authors.

This volume contains a total of sixteen stories, from authors such as William Hope Hodgson, Arthur Machen, Mary Anne Allen, and many others.

Introduction by Mark Valentine
“The Warder of the Door” by Robert Eustace & L.T.Meade
“The Story of Sevens Hall” by E. & H. Heron
“The Gateway of the Monster” by William Hope Hodgson
‘The Red Hand’ by Arthur Machen
“The Haunted Woman” by Allen Upward
“The Ghost with the Club-foot” by Robert Barr
‘The Curious Activities of Basil Thorpenden’ by Vernon Knowles
“The Necromancer by Donald Campbell
“Waste Manor” by L. Adams Beck
“The House of Fenris” by John Cooling
“The Prince of the Barlocco” by Mark Valentine
“The Legacy of the Viper” by C.P. Langeveld
“The Sheelagh-Na-Gig” by Mary Anne Allen
“The Black Veil” by A.F.Kidd
“Like Clockwork” by R.B. Russell
“Spirit Solutions” by Rosalie Parker

The tales in The Black Veil & Other Tales of Supernatural Sleuths were selected and introduced by Mark Valentine. It was published by Wordsworth on June 12, 2008. It is 256 pages in oversized paperback, priced at $6.99.

Lots of intriguing titles in that series.

I just picked up their ‘Casebook of Sexton Blake’ this week.

Woah! Some of these are available on Kindle now? Well, that’s cool, too.

‘Sherlock Holmes: The Game is Afoot’ has some pretty good stories in it.

> I just picked up their ‘Casebook of Sexton Blake’ this week.

I’ve had my eye on that one for a while. What did you you think?

Okay, you totally scooped me — I never even knew this one existed. I just looked it up on Amazon… 704 pages??

Wow. Every one I’ve purchased up to now has been a slender little paperback… I had no idea they came that big!

> ‘Sherlock Holmes: The Game is Afoot’ has some pretty good stories in it.

You people need to stop mentioning Tales of Mystery And The Supernatural volumes I know nothing about. Seriously, quit it, it’s embarrassing.

I just looked this one up, too. It looks terrific. I see another urgent book order in my near future.

Sexton Blake? Cool! Until recently I was never quite sure if he (or Zenith the Albino) was actually real or if it was some elaborate meta-thing created by Michael Moorcock …

@John – I knew that one because David Stuart Davies was my editor when I wrote for Sherlock Magazine. So I was one up on you there.

As folks have said here, the Wordsworth series is pretty nifty. They’ve even got a Robert E. Howard edition.

It’s a little early for me to comment on ‘The Casebook of Sexton Blake’ for story content, I’m only into the first 10 pages of the first tale.

I can tell you, like the Whitehead collection, it is surprisingly thick – 545 pages. 7 classic Blake stories by different writers between 1907 – 1923.

A succinct introduction goes over Blake’s history – an evolution from Baker-Street-Residing-Pipe-Smoking-Holmes-ripoff to his own niche of catch-all pulp adventurer.

I wanted to try these classic tales before delving into some James-Bond-mode stories from the early 1960s that a friend (Charles R. Rutledge) had sent me.

Bob – yes, there is that Howard book along with a Solomon Kane collection, too.

My question for everyone is – what is the difference between the ‘Gray’ editions and the ‘Crimson’ editions? It appears some were given both treatments, but some not (e.g.; the Howard misc collection and the Holmes book.) Were they British vs. North American? Or, are the crimsons second editions?

When I ordered ‘..Blake’ Amazon was displaying the gray cover, but they sent me crimson – which has complete new artwork, I might add, not just a color scheme change.

There do seem to be more out there than just those listed here. But maybe this is only what they have in stock to order?

As I said on Paul’s blog yesterday, I’ve got to stop reading these posts. I have no idea where I’m going to find the time to read everything I buy based on these recommendations.

Looking through some of the titles, I see a few that were published by Ash Tree Press that are still listed on their page.

Paul, I think (and this is merely my opinion) that the difference in grey and red covers is that the red are new. I’ve seen some of these volumes for years in Half Price Books and they were all grey. It looks like the red is simply a new color scheme that’s more eye-catching than the grey. But that’s just a guess on my part.

An excellent book in this series is Richard Marsh’s The Beetle. I first heard about this book on a Cthulhu website a few years ago. I picked it up then and loved it. But, besides that website, I’ve never seen anyone ever mention it.

The Beetle was published the same year as Stoker’s Dracula and actually out sold it for a time. I think time has shown which is the better book. But Marsh’s tale still holds up; it’s a truly creepy book. I don’t know why it’s mostly forgotten.

[…] fear’ ever put on the page.” Or maybe a ghost detective story from Mark Valentine’s The Black Veil & Other Tales of Supernatural Sleuths. Or a Sherlock Holmes pastiche from The Game’s […]