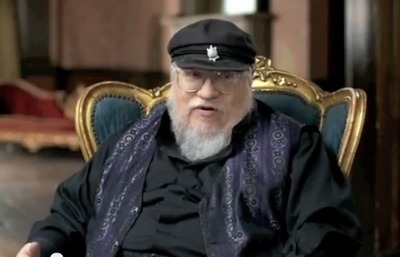 This article has been making the rounds on the Internet since it was posted yesterday at UK satire site Underground Magazine — and it’s too good not to share. Funny as it is, the numerous outraged comments it’s received, from shall-we-say less informed fans of the HBO show, are equally hilarious (some of the comments were posted on Weird Tales’ Facebook page).

The entertainment industry was today warning fans of the popular HBO series Game Of Thrones to avoid ‘at all costs’ a series of books by a rogue enthusiast named George R.R. Martin, who has written five whole volumes consisting solely of spoilers for the popular television show.

“This man is dangerous and wants to ruin everyone’s enjoyment of a much-loved fantasy drama.” said executive producer D. B. Weiss. “It’s a sad symptom of today’s ‘binge’ culture that people can’t just wait and enjoy things as they are released. They want everything at once…”

Some of the books in question, which add up to a total of some 4,200 pages, contain so many spoilers that they have had to be split into volumes. HBO executives are investigating how Martin is able to work on new editions set far in advance of the current TV series.

TV fan Simon Rix told us he “picked up a copy of one of the books thinking it was a companion piece or a spin-off from the TV show, but after reading all of them in one week, I had the whole show ruined for me in intricate detail. There were characters I’d never heard of, plot lines that went way off course, and not nearly as much nudity.”

Ha! I needed that. The link to the FB comments is hilarious. “Some people should really stop eating glue.” Brilliant.

Confession: I’ve never read the books, not even the first, and I set the TV series aside. Maybe women fare better later on, but in the early going…sheesh.

I do, however, ADORE his short story “The Ice Dragon.”

Yeah! And that Tolkien guy, too! Somebody oughtta boot him one for giving away the ending to all Peter Jackson’s movies. There oughtta be a law!

Alas the article seems to have dissapeared. the link here and the link on the FB article take you to an invalid URL.

> Alas the article seems to have dissapeared. the link here and the link on the FB article take you to an invalid URL.

The entire Underground Magazine site appears to be offline for the moment. Perhaps they’re surface elsewhere, like a moving underground market?

With over 390K feed subscribers there is always a certain number of the intellectualy chalenged present.

They help to keep things interesting.
4NVH
On Robert Bloch’s birthday I ended up posting Bloch’s wiki entry just to explain to some folks who he was.