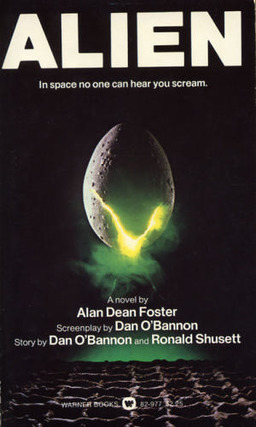 I was a very young Goth Chick, spending a typical Saturday combing the used paperbacks for sale at my local library. It’s hard to feed a literary addiction on a six-grader’s salary, as I know every last one of you understand.

And there it was.

Dog-eared and minus its back cover, but with that impossible-to-miss front cover art. It was based on the movie I wasn’t allowed to watch, the one with the R-rating, which obviously meant it was the best movie ever committed to film. Or at least the scariest.

My parents clearly had not considered the library a place to land contraband of this magnitude.

I bolted for the front desk, threw my two quarters at the librarian, waved the yellowed, pulpy tome in her general direction, and exited the library to the adjacent park where I sat planted for the remainder of the afternoon – transfixed.

That was where I fell in twisted, grossed-out love with the movie Alien — and the man who told me the story (which is better than seeing it anyway), Mr. Alan Dean Foster.  It was the beginning of a long and intense relationship, at least by sixth-grade standards.

Back then, a used-book seller would have been the most likely place to have found a copy of Alien, a book which has been out of print since 1992. A pity, since it is widely considered the defining testament to how a novelization can complement an already-great film.

But this week, all that changed.

On Tuesday, April 15th, in honor of its 35th anniversary, Titan Books released a new printing of Alien: The Official Movie Novelization.

Since its original release in May 1979, Alien has garnered iconic status, reaping critical acclaim as well as box office success. Seamlessly blending interstellar science fiction with dark, moody horror, Alien: The Official Movie Novelization allowed readers to once again discover the unparalleled exhilaration and sheer terror of the legendary film.

Foster was also the ghostwriter of the 1976 novelization of Star Wars, which had been credited solely to George Lucas. After two other writers had declined his offer of a flat fee of $5,000 for the work, Lucas brought Foster the original screenplay, after which Foster fleshed out the backstory of time, place, planets, races, history, and technology in such detail that his work became the foundation for all subsequent Star Wars novels. 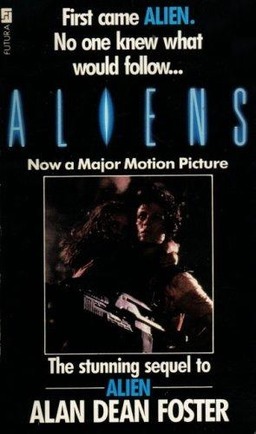 When asked if it was difficult for him to see Lucas get all the credit for Star Wars, Foster said:

Not at all. It was George’s story idea. I was merely expanding upon it. Not having my name on the cover didn’t bother me in the least. It would be akin to a contractor demanding to have his name on a Frank Lloyd Wright house.

It was his work on the Star Wars novelizations that prompted 20th Century Fox to tap Foster for a treatment for Aliens, based on the script, while filming for the movie was in progress. The studio wanted the printed version to be ready to go as soon as the film hit theaters.

In an interview with the site Cult Film Freak, Foster states:

Fox wouldn’t let anyone not directly connected with the filming (of the Alien movie) see a picture of the alien. So I had to write the book without knowing what the alien looked like. Damn difficult.

I was able to add a good deal about the space jockey ship, how it was found, and in particular I was able to novelize the scene that shows Ripley finding Dallas wrapped up in the alien cocoon, which is critical to understanding the alien’s motivations. I wrote the book in three weeks, often at night looking over my shoulder.

By the time I was finally old enough to see the movie Alien, I was somewhat disappointed in the differences between film version and Foster’s story which contained extra scenes and details; such as the sequence where Ripley and the rest of the surviving crew attempt to eject the alien from an airlock, only for a treacherous Ash to sound an alarm and scare the thing off. A hatch door slams shut, tearing off a limb as the beast escapes, the subsequent flow of acid from the wound almost causes a deadly depressurization. It was a scene ultimately left out of the production to save money.

Another sequence, which Foster referenced in the above interview, where Ripley finds Dallas cocooned in a darkened corner of the Nostromo, was filmed but left out of the final cut, and would go unseen for several years before appearing as a deleted scene on LaserDisc.

Titan Books plans to re-release Foster’s subsequent Alien sequels as well: Aliens (April 29) and Alien 3 (May 27). For now, have a look at the first few pages of Alien, then pick up a copy and sequester yourself somewhere that no one will hear you scream…

Are you excited about the re-release of Foster’s novelizations?  Or have you read his Star Wars or Star Trek versions?  Post a comment or drop a line to sue@blackgate.com.

Chick, some day I MUST tell you my Allen Dean Foster story 🙂

Actually, this news does excite me quite a lot. I was a huge Foster fan in the late ’70s and early ’80s, in no small part because of all his movie tie-in works.

Now if they’d only reprint his “Outland” and the original “Clash of the Titans.”

Yep, Foster’s novelizations of Alien and Outland were my gateway to the mysterious world of R-rated movies when I was still too young to see them in the theater …

I read the book and the scene with Dallas was heart wrenching. I think they should have kept it in the movie. It would have ruined a bit of the surprise in the Aliens movie but…I think Aliens was so good that it would have done just fine.

I knew I could count on all of you to understand. Personally, I will be repurchasing all three republications and reliving that initial thrill.

Speaking of thrill – Art, you naughty academic; stop being such a tease and email me the story…

@Joe H Thanks Joe, I would like to see that.