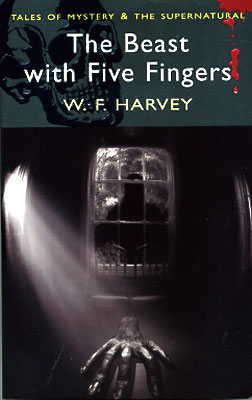 Two weeks ago, I mentioned The Power of Darkness: Tales of Terror, by Edith Nesbit, a volume in the Wordsworth Tales of Mystery And The Supernatural (or, as we prefer to call it, TOMAToS).

I first discovered Wordsworth’s excellent Tales of Mystery And The Supernatural line, believe it or not, wandering the floor at the Windy City Pulp and Paperback show in Chicago with fellow pulp aficionados Howard Andrew Jones and John C. Hocking. We’d just passed a dealer selling omnibus collections of Ki-Gor reprints — which heartily tempted Howard, let me tell you — when Hocking became distracted by a thick volume on display amidst a vast sea of books: The Beast With Five Fingers, by W.F. Harvey.

I’d never heard of Harvey, although he’s fairly well-known in pulp circles for the short story that became The Beast With Five Fingers, a 1946 creeping-hand horror flick starring Peter Lorre. Hocking’s excitement had nothing to do with the cover story however, and everything to do with “The Clock,” which he described as one of the finest horror stories ever written. That was enough for me, and I took home a copy.

Hocking is not alone in his admiration. In Gahan Wilson’s anthology Favorite Tales of Horror, which includes “The Clock,” Wilson famously wrote:

I’m happy to say that the story lives up to its reputation. It’s a tiny marvel, splendidly written, about a mysterious and macabre encounter in an abandoned home. Or is it? Like much of the best gothic fiction, exactly what happened is open to interpretation.

But there’s more to The Beast with Five Fingers than just “The Clock” — much more — and I’m happy to say I’ve been enjoying the entire book. (If you’re not the patient sort, however, the complete text of “The Clock” is available online.)

The Beast with Five Fingers was published by Wordsworth Editions in May, 2009. It is 432 pages in paperback, priced at a criminally low $6.99. There is no digital edition.

You can see all of our recent Vintage Treasures here.

Unfortunately, ‘Tales of Mystery and the Supernatural’ are on the chopping line. Only two titles planned for next year, and future of the line unknown.

Still, there are already 72 titles in print, so there’s plenty to be thankful for:

I third that recommendation for The Clock. That is a wonderful short little horror story.

I’ve had less luck with the rest of the collection — John, which ones did you really like?

The Clock is such a masterful short piece that it puts the other tales I’ve read by Harvey in the shade. Not that his other work is bad, it just seems soft in the shadow of The Clock. Strange that such a small story could have such prodigious weight. Truly one of the finest examples of what H.P. Lovecraft called ‘spectral fear’ ever put on the page.

I can’t think of another tale in which a set of disparate impressions are perceived by the protagoinst (and the reader), and fail to add up, to make any kind of logical, coherent picture. And the result is deeply, seriously uncomfortable.

The narrator doesn’t want to know what it is. I do not blame the narrator one little bit.

The other story by Harvey that has garnered almost as much acclaim as The Clock is August Heat, which is also in this collection. I meant to read it this last Halloween and did not. I’m saving it for a rainy night.

[…] in the Wordsworth Tales of Mystery And The Supernatural series we’ve covered here, after The Beast with Five Fingers by W.F. Harvey, The Power of Darkness — Tales of Terror, by Edith Nesbit, and Alice and Claude […]

> I’ve had less luck with the rest of the collection — John, which ones did you really like?

“The Clock” is the clear winner so far. But Harvey’s prose style is consistently solid (at least, among those I’ve read so far), even if the other stories don’t have the same impact.

After Hocking’s suggestion, I’m eager to try “August Heat” next.

[…] Clock” got a recent shout-out on this very site, and both John O’Neill and Howard Andrew Jones (The Bones of the Old Ones) […]

[…] Understanding Howard’s “The Tower of the Elephant” The Shapes of Midnight by Joseph Payne Brennan When Aliens are Delicious: Murray Leinster’s “Proxima Centauri” and the Creepy Side of Pulp SF Professor Jameson’s Space Adventures, or Zoromes Make the Happiest Cyborgs The Best One-Sentence Reviews of Manly Wade Wellman The Beast with Five Fingers by W.F. Harvey […]

[…] they come around. I think I’ll start with W.F. Harvey’s “The Clock,” from The Beast with Five Fingers, which John C. Hocking called “a masterful short piece… Truly one of the finest […]