William Hope Hodgson’s Carnacki outlived his creator with a tenacity that Hodgson, a bantam rooster of a man, would have appreciated. Thomas Carnacki, resident of 472 Cheyne Walk, London, first appeared in a series of five stories (“Gateway of the Monster”, “The House Among the Laurels”, “The Whistling Room”, “The Horse of the Invisible”, and “The Searcher of the End House”) in The Idler Magazine in the January through April, as well as June, issues of 1910. But despite Hodgson’s death in World War I, Carnacki carried on in a further four stories (“The Thing Invisible”, “The Hog”, “The Haunted Jarvee” and “The Find”) retrieved from Hodgson’s papers by his wife. All nine stories are available in a variety of printed, electronic and audio forms.

But that wasn’t the end. Carnacki’s career was further chronicled by other writers, including A. F. Kidd, Andrew Cartmel, Barbara Hambly, Alberto Lopez Aroca, Kim Newman, Willie Meikle and Alan Moore. He battled evil alongside the Second Doctor and Sherlock Holmes, as well as Mina Murray’s League. He appeared on television, played ably by Donald Pleasance. He’s even inspired a concept album! But in each of his incarnations, Carnacki combined ancient sorceries and Edwardian science to face the squealing, swine-faced threats of the Outer Void.

-Thomas Carnacki, “The Horse of the Invisible”

Hodgson’s Carnacki tales function at a level removed from the reader. Told from the viewpoint of ‘Dodgson’, one of a circle of friends who gather on a regular basis at the strange little flat at 472 Cheyne Walk, London to hear Carnacki talk about his latest adventure, the formula reads like a tale told by a friend of a friend. But these degrees of separation lend a strange sort of veracity to the stories, making Carnacki’s outlandish descriptions, delivered in a dry, witty style, all the more believable.

And the situations are outlandish…in “The Thing Invisible”, a cursed dagger kills of its own accord; in “The Hog”, a porcine nightmare from another reality invades a man’s dreams and the waking world; and in “The Horse of the Invisible” the titular equine threatens the lives of a cursed family. The sad, lonely ghosts of drowned sailors and lovelorn maidens are not for Carnacki. His interests lie in more dangerous territories, hunting the horrors that populate the void between worlds.

Of course, he doesn’t always find them. The answers to Carnacki’s mysteries range from the rational to the irrational to the ridiculous. For every monstrous HOG, there is a cunning murderer or antique booby-trap. It is this gamut of explanation that makes the stories as intriguing as they are. A new reader won’t know what they’re getting until the final climax (and sometimes not even then!). 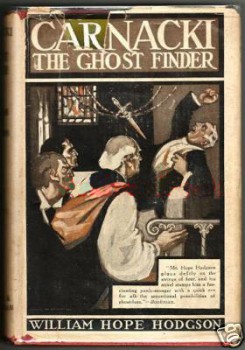 As for Thomas Carnacki himself, we know little about him, beyond that he is financially secure and an adjudged and recognized expert in a number of fields. The upper classes seek his aid as readily as the police, though Carnacki appears not to take a fee. Like John Silence, interest appears to be his main motivation in taking a case. And like Silence, he appears to have sprouted fully-formed from Hodgson’s mind. How he came to be, how he learned what he now knows is never touched upon, much in the same way that Sherlock Holmes’ origins are never mentioned. We get brief, tantalizing glimpses, but nothing concrete. Carnacki is, simply, Carnacki, and that is enough.

However, unlike either Silence or Holmes, Carnacki’s resolutions of the mysteries he faces come not through serene practiced omniscience, but via hard graft. Carnacki is, like Shiela Crerar, a sleuth first and an occultist second. His investigations combine the otherworldly and the mundane in a unique fashion, and Carnacki appears to live by the adage, ‘expect the obvious and prepare for the impossible’.

If a defense can be conjured, prepared or built, Carnacki does so with an almost anal-retentive mania. After all, he’s seen what happens to those who face the unfriendly deeps armed only with positive thoughts or British bluster, and it’s this caution which enlivens the character for the reader. Carnacki, unlike Silence or Crerar, is, at points, terrified. And he’s not shy about sharing that fact. Nor is he shy about pointing out when his boldness was unwarranted or when his preparations were underwhelming.

But while Carnacki isn’t the sort to meet a fallen angel face to face (though the eponymous monster of “The Hog” might well qualify) without flinching, neither is he the type to wish to do so, knowing full well that being noticed by his quarry is always the worst mistake a hunter can make. Still, like all good hunters, he’s prepared for that eventuality. 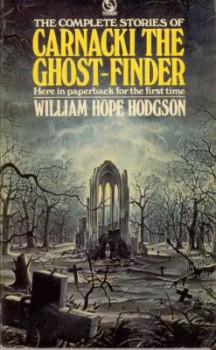 Seemingly self-educated in matters of the occult, Carnacki employs stratagems straight out of the Sherlock Holmes guide to investigative technique but melds them with the occult sciences. Employing flash photography and fingerprinting techniques side-by-side with the Saamaa Rituals of the esoteric Sigsand Manuscript: his guidebook to the invisible world which provides him with odd protections concerning the color spectrum and the power of certain elements over others.

It is the Electric Pentacle, however, which stands paramount. Exactly what it sounds like, the Pentacle is composed of nothing more than a generator and vacuum tubes with colored bulbs. But, by situating it within a chalk circle (or, in one case, a circle of water), Carnacki can flip the switch and hey, presto-instant magic circle. Granted, it seems to work only about half the time, and on at least two occasions its usage almost gets Carnacki killed, but it’s nonetheless symbolic of his approach to combat with the forces of unreality.

And it is combat, if of an unusual nature. When the culprit is in fact a malign entity rather than a human being, Carnacki stops at nothing to banish it, pitting himself against horrors he has little concept for, all in the name of sanity or friendship. Interest gets him involved, but courage keeps Carnacki in the fight.

And at the end, when his story is told, he sends his friends out into the night with a warm feeling of safety to replace the dread he has engendered and a hearty, haunting “Out you go!”

At least until the next time.

Nice article. I’m a Carnacki fan from way back, though I haven’t re-read the stories in years. Re-reading them now will require repurchasing them, for my copy (I owned the paperback near the bottom of your article) became a water-soaked brick in a recent house flood.

[…] and are, by and large, of a slower pace than those featuring Vance’s contemporaries, such as Carnacki. Only one of the stories has been regularly anthologized (“The Vampire”), with the rest […]

[…] with enemies a good deal worse than mere vampires, including a few entities that would have given Thomas Carnacki […]

Coming to a Table of Contents Near You… « HUNTING MONSTERS

[…] in the anthology Professor Challenger: Lost Places, New Worlds (Edge Publishing), which has Carnacki the Ghost-Finder, Lord John Roxton, Edward Malone and Professor Summerlee attempting to discover the truth behind […]

[…] the character was crafted in the tradition of other occult investigators, such as John Silence or Carnacki; Crow was an avowed agent of good, his struggles all the more impressive for occurring as they did […]

“The Ghost-Finder” « THE ADVENTURES OF THE ROYAL OCCULTIST

“The Ghost-Seer” « THE ADVENTURES OF THE ROYAL OCCULTIST

[…] and are, by and large, of a slower pace than those featuring Vance’s contemporaries, such as Carnacki. Only one of the stories has been regularly anthologized (“The Vampire”), with the rest […]

[…] in 2012 by Jim Beard, Janus is equal parts Carnacki, Aylmer Vance and John Silence, and was intentionally crafted as equal parts homage and successor […]

[…] in 2012 by Jim Beard, Janus is equal parts Carnacki,Aylmer Vance, and John Silence, and was intentionally crafted as equal parts homage and successor […]

[…] about my contribution to this anthology before, but to reiterate, “Time’s Black Gulf” sees Carnacki the Ghost-Finder, Lord John Roxton, Edward Malone and Professor Summerlee attempting to discover the truth behind […]

[…] Josh Reynolds explored the career of Carnacki The Ghost Finder in greater detail as part of his The Nightmare Men series last year. […]

“The Spirit-Breaker” « THE ADVENTURES OF THE ROYAL OCCULTIST

[…] in 2012 by Jim Beard, Janus is equal parts Carnacki, Aylmer Vance, and John Silence, and was intentionally crafted as equal parts homage and […]

[…] characters like Algernon Blackwood’s John Silence, or William Hope Hodgson’s Carnacki might be considered the archetypal occult detectives of the late nineteenth and early twentieth […]

[…] is “The Swine of Gerasene”, a story by me, which sees William Hope Hodgson’s Carnacki the Ghost-Finder team-up with Algernon Blackwood’s John Silence and Norbert Sevestre’s Sar Dubnotal in […]

[…] of attention to Supernatural Sleuths at Black Gate over the years, from William Hope Hodgson’s Carnacki The Ghost Finder to Manly Wade Wellman’s John Thunstone and Silver John stories, and Paula Guran’s […]

[…] the character was crafted in the tradition of other occult investigators, such as John Silence or Carnacki; Crow was an avowed agent of good, his struggles all the more impressive for occurring as they did […]

[…] contribution, “Hochmuller’s Hound”, sees the Royal Occultist, Thomas Carnacki, and his assistant, Charles St. Cyprian, face off against the monstrous Hound of Mons in the […]