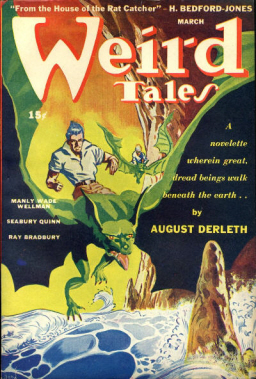 ‘…an elderly man who wore his hair long and white…a firm, almost prognathus chin, half-pursed lips and a strong Roman nose. His eyes were not visible at all, for he wore dark glasses with shields which prevented one from seeing his eyes even from the side.’

Such is our first glimpse of Dr. Laban Shrewsbury, late of Arkham, late of the distant star Celaeno, and the Hyades in the 1944 story, “The House on Curwen Street”.  Blind, and yet all-seeing, Shrewsbury stands between humanity and Lovecraft’s nightmarish god-things, employing weapons both material and supernatural in the world’s defense.

Created in 1944 by August Derleth for a series of interlinked stories set firmly in the dark universe of HP Lovecraft’s Cthulhu Mythos — a term coined by Derleth himself — Shrewsbury was far from the standard Lovecraftian protagonist. With his incantations and machinations, he is at first glance the antithesis of the hapless antiquarians and artists who populate both the original stories and many of the pastiches that came after.

“They are at the mouth of the Miskatonic now. But I am ready.”

Shrewsbury is far more active than his predecessors, who are, in most cases, passive victims of the horrors they encounter. Unlike John Kirowan, who has seen the audient void and been frightened by it into a haunted and semi-reclusive retirement, Shrewsbury is more akin to Titus Crow—he is an active combatant in a war in which humanity is, at best, a pawn, and at worst, food for the titanic forces at play.

In digging further, one finds a clear link between Shrewsbury and characters such as Inspector Legrasse. Indeed, Shrewsbury could be seen as a figurative descendant of Legrasse—in Shrewsbury, with his grotesque scars, esoteric knowledge, and inhuman cunning, we have the end result of Legrasse’s Quixote-like tilting at eldritch windmills. Shrewsbury, by his own admittance, was nothing more than an anthropologist and professor of philosophy at Miskatonic University before, like Legrasse, stumbling across the unknown and unmentionable and paying the price. 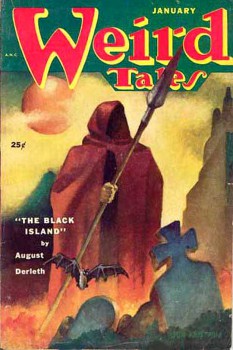 In Shrewsbury’s case, the price was physical as well as mental—his eyes were plucked from his head and his body was scarred by the tortures of his enemies. Sightless and spiritually hardened by his experiences, Shrewsbury has become a man with a mission, a mission which takes he and his at-times unwitting accomplices through the five stories which would eventually be collected under the title of The Trail of Cthulhu in 1962 by Arkham House. The stories—“The House on Curwen Street,” “The Watcher from the Sky,” “The Gorge Beyond Salapunco,” “The Keeper of the Key,” and “The Black Island”—appeared between 1944 and 1952 in Weird Tales, and chronicle Shrewsbury and company‘s attempts to stymie the machinations of the Cthulhu Cult and, in the final story, to destroy the eponymous monstrosity itself with the help of the US Navy and a nuclear weapon.

That said, there is more than a whiff of the pulp hero about Shrewsbury. He does not merely consult alien tomes and necromantic grimoires, but has written them. Blessed with psychic sensitivity, he bellows incantations and summons demonic steeds with the regularity of Doc Savage unleashing technological gimmicks. He is engaged in a guerilla war against a vast cosmic conspiracy, always escaping moments ahead of batrachian assassins and mammoth undersea monstrosities, retreating to his Fortress of Solitude in Celaeno to plan new campaigns against his eternal enemies. 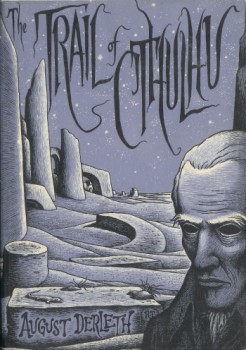 And they are eternal. Lovecraft’s monstrous Old Ones, even when filtered through Derleth’s dualism, are inimical and immortal forces of nature and Shrewsbury can only, at best, hold them at bay. His struggle, waged by clandestine means across the span of the five stories that make up The Trail of Cthulhu, is one of futility in the face of omnipotence—gnats trying to kill giants. Despite (or perhaps because of) Shrewsbury’s pulp hero sheen, his struggles against forces that even his alien-enhanced intellect can only dimly comprehend are tinged with a fatalistic desperation.

Unlike Crow, who won an unprecedented victory, or Zarnak or even Thunstone, who defeated their personal devils time and again, Laban Shrewsbury struggles on, outmatched, outnumbered, and outgunned by his foes. Ringed about by dooms he cannot see, the blind man battles on, tilting at the indescribable and inexorable to win but one minute more for humanity.

The Trail of Cthulhu is available from Amazon and a variety of online retailers, including eBay. However, it’s been out of print for close to a decade, so if you’re interested in reading it without breaking your bank account, it pays to do some delving.

“I rather think it cannot have survived that,” said General Holberg calmly.

“I pray Heaven you are right,” said Dr. Shrewsbury firmly.

Josh Reynolds is a freelance writer of moderate skill and exceptional confidence. His novel, Neferata: Blood of Nagash, is available from Black Library. His short fiction has appeared in such anthologies as Historical Lovecraft and Horror for the Holidays. Feel free to check out his take on the occult detective genre, featuring Charles St. Cyprian, the Royal Occultist at http://royaloccultist.wordpress.com/ or visit his blog, HUNTING MONSTERS at http://joshuamreynolds.wordpress.com/

“The Blind Man” « THE ADVENTURES OF THE ROYAL OCCULTIST

[…] that that ruthlessness served de Grandin well. Unlike the dour John Kirowan or the unfortunate Laban Shrewsbury, de Grandin never met an enemy he could not out-think, out-fight or simply out-gun. His propensity […]