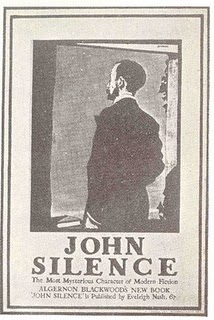 ‘Rich by accident and a doctor by choice, John Silence took only those cases which interested him.’

The above is from “A Psychical Invasion” (1908), the first of Algernon Blackwood’s stories to feature Dr. John Silence, the ‘psychic doctor’.  Blackwood chronicled six of Silence’s cases, though only five appear in the initial collection, John Silence (containing “A Psychical Invasion”, “Ancient Sorceries”, “The Nemesis of Fire”, “Secret Worship”, and “The Camp of the Dog”; “A Victim of Higher Space”, the sixth story, was included in later collections) released in 1908 (then re-issued in 1942). Even if you can’t get your hands on one of the many reprint collections (or on the 1942 re-issue as I was lucky enough to do), you can rest easy…Blackwood’s work is in the public domain and is freely available from a variety of electronic sources.

“Learn how to THINK and you have learned to tap power at its source.”

Described as a handsome man, bearded and kindly-eyed in “A Psychical Invasion”, Silence is an anomaly to his peers — a genuine philanthropist, accepting only pro-bono cases of peculiar (RE: psychic) affliction, the cases which, as stated above, interest him in some way. How Silence went from a simple medical man to the ‘psychical physician’ is a story never told, but the origins of which likely lie within the mysterious half-decade that Silence undertook his long and severe training.

We are not told where this training took place, or what form it took beyond being at once a strengthening of his physical, mental and spiritual muscles. For five years, Silence disappeared from the world completely and when he returned, he took up his investigations into the supernatural. And it’s at that point that Blackwood introduces us to him, though it’s safe to say he’s already got a few cases under his belt when we’re first introduced to him in “A Psychical Invasion”. Silence’s reputation precedes him, and his business is word-of-mouth. 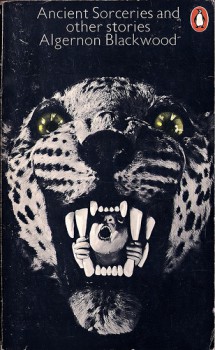 Despite his morbid sense of humor and quirky impatience, at first glance Silence appears little different from his predecessor, Le Fanu’s Dr. Hesselius, another ‘psychic doctor’. But as his confrontation with the malevolent possessing entity of “A Psychical Invasion” progresses, Silence shows himself to be an altogether different sort of medical practitioner.

To Silence, the loss of a man’s sense of humour (as in “A Psychical Invasion”) or persistent dreams of cats (“Ancient Sorceries”) are neither simple nor natural ailments brought on by a confluence of coincidence. Instead, they are spiritual cancers that must be rooted out of the minds and souls of the afflicted by any means necessary, though not, unfortunately, always successfully.

‘The Other’ is an infection in Silence’s view…a dangerous toy at best and a fatal condition at worst. Whether it takes the form of hapless Sangree’s lycanthropic night-wandering as in “The Camp of the Dog” or poor Mr. Mudge’s involuntary transportations in “A Victim of Higher Space”, it is something which must be excised from the body social for the benefit of everyone.

It his methods in regards to these cases which truly set Silence apart; less a doctor than a holistic shaman and more spiritualist than surgeon, he possesses a keen insight into human nature and an almost empathic grasp of his patient’s ailment, whether it’s ensorcellment or ectoplasmic manifestations. It is these two traits which form the basic tools that Silence employs. 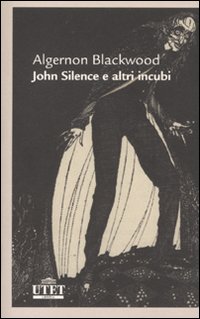 Where other occult detectives make use of science or magic to battle back the darkness, Silence employs only the power of the mind, whether channelled through the combination of a sensitive cat and protective dog as in “A Psychical Invasion”, or through the ‘good feelings’ of his occasional assistant, the ever-hapless Mr. Hubbard, as in “The Nemesis of Fire”.

This is not to say that Silence doesn’t confronts malicious psychic forces face-to-face; in both “A Psychical Invasion” and “Secret Worship”, Silence places himself in harm’s way to stare down respectively the ghost of a witch and the earthly manifestation of a fallen angel.

In all cases, however, Silence achieves his aims not through superior force, but through an almost Zen-like understanding which unravels the complexities facing him and reduces them to but the merest scraps of ill-feeling. For Silence, knowledge is indeed power and he employs his vast arsenal of the former with the deft touch of a scalpel, illuminating the darkness with the power of raw thought.

Unfortunately, as with any surgeon, his skills can only take him so far, a fact which Silence himself readily admits. Indeed, not one of the six stories ends on an unequivocal up-note. Silence triumphs (or at the very least, explains) but not without cost to either himself or others…bodies are battered, minds are strained, and souls are frayed by the presence of the infernal. The scars of surgery, whether psychic or physical, always linger. As with anything, there is always a price to be paid by those who pit themselves against the darkness.

Luckily, John Silence is always available for a free consultation.

Black Gate » Blog Archive » The Start of Something Strange

[…] Dimension. Strange is a kind of occult detective, a figure in the tradition of Martin Hessselius or John Silence (or, more closely, Mandrake or Zatara). Unlike them, though, he’s more magician than detective. […]

[…] classes seek his aid as readily as the police, though Carnacki appears not to take a fee. Like John Silence, interest appears to be his main motivation in taking a case. And like Silence, he appears to have […]

[…] affectionate, and almost inhumanly ruthless, Zarnak is no comforting Judge Pursuivant or soothing John Silence. He is singularly and irrepressibly […]

[…] the menace becomes unavoidable, he ceases playacting and gets down to business. There’s a bit of John Silence about Kirowan at these points; a sort of otherworldly poise that comes into play at the climax of […]

[…] life, knowledge and light, while the other brings only darkness and decay. Van Helsing, like John Silence, is a representative of all that is good in man, set in opposition to malign forces which seek to […]

[…] Brian Lumley, the character was crafted in the tradition of other occult investigators, such as John Silence or Carnacki; Crow was an avowed agent of good, his struggles all the more impressive for occurring […]

“Physician Extraordinary” « THE ADVENTURES OF THE ROYAL OCCULTIST

[…] Brian Lumley, the character was crafted in the tradition of other occult investigators, such as John Silence or Carnacki; Crow was an avowed agent of good, his struggles all the more impressive for occurring […]

[…] Ebe Gallowglass join forces with five other occult detectives–including Algernon Blackwood’s John Silence–to confront the horrors of the Great Old Ones in London in 1921.. Image below […]

LOVECRAFT EZINE #18 Now Available! « THE ADVENTURES OF THE ROYAL OCCULTIST

“The Gotterdammerung Gavotte” Excerpt « THE ADVENTURES OF THE ROYAL OCCULTIST

[…] Ebe Gallowglass join forces with five other occult detectives–including Algernon Blackwood’s John Silence–to confront the horrors of the Great Old Ones in London in 1921. It was published in 2012 […]

[…] in 2012 by Jim Beard, Janus is equal parts Carnacki, Aylmer Vance and John Silence, and was intentionally crafted as equal parts homage and successor to those earlier Edwardian […]

“God’s Madman” « THE ADVENTURES OF THE ROYAL OCCULTIST

[…] life, knowledge and light, while the other brings only darkness and decay. Van Helsing, like John Silence, is a representative of all that is good in man, set in opposition to malign forces which seek to […]

[…] Brian Lumley, the character was crafted in the tradition of other occult investigators, such as John Silence or Carnacki; Crow was an avowed agent of good, his struggles all the more impressive for […]

[…] join forces with five other occult detectives–including Algernon Blackwood’s John Silence–to confront the horrors of the Great Old Ones in London in 1921. It was published in 2012 […]

[…] Ebe Gallowglass join forces with five other occult detectives–including Algernon Blackwood’s John Silence–to confront the horrors of the Great Old Ones in London in 1921. It was published in 2012 […]

[…] Ebe Gallowglass join forces with five other occult detectives–including Algernon Blackwood’s John Silence–to confront the horrors of the Great Old Ones in London in 1921. It is available for the […]

[…] characters like Algernon Blackwood’s John Silence, or William Hope Hodgson’s Carnacki might be considered the archetypal occult detectives of the […]

[…] For a little more on the stories check out my reviews below.  Another excellent discussion of John Silence can be found at blackgate.com […]

‘So, When Did They Fight Krampus?’: A Royal Occultist Chronology | THE ADVENTURES OF THE ROYAL OCCULTIST

[…] That was more than enough to pique my curiosity. It didn’t hurt that only a few months later, in his lengthy series for Black Gate on The Nightmare Men, author Josh Reynolds devoted an entry to John Silence, “Physician Extraordinary” […]