‘He was impossible to miss. Tall in his dark suit, with his leonine head and imposing looks, he would have seemed prominent in any crowd…’ Such is the description of Titus Crow, delivered by his amanuensis and friend, Henri-Laurent De Marigny in the opening pages of the 1977 story, “The Viking’s Stone”. Created in 1971 by author Brian Lumley, the character was crafted in the tradition of other occult investigators, such as John Silence or Carnacki; Crow was an avowed agent of good, his struggles all the more impressive for occurring as they did in the harsh, nihilistic universe created by HP Lovecraft.

“Titus Crow?” said Arnold. “Yes, well, we’ve all had reason to fear him in our time…” 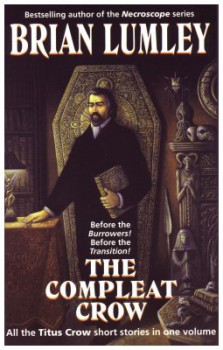 Titus Crow first appeared in Lumley’s 1971 story, “The Caller of the Black”. Crow’s credentials as a psychic sleuth and occult investigator are impressively vetted in the story, as he defeats both mortal and immortal enemies through the cunning application of the standard Lovecraftian eldritch lore, a shower faucet and a window pole. From the outset, it is clear that Crow inhabits the same deadly universe as Inspector Legrasse or John Kirowan, where elder entities prey on a mostly unaware human population; but unlike the former, Crow is well-armed against such entities and, unlike the latter, he’s quite happy to test himself against their machinations out of  simple heroism.

Schooled in a wealth of occult lore and possessed of an innate desire to confront evil, Crow is seemingly destined from birth to pit himself against the abominable. Indeed the 1987 story, “Inception” concerns the weird circumstances of Crow’s birth and baptism and the battle between Good and Evil which revolves around the latter. Too, the occult numerology behind the date and hour of that special birth comes into play more than once, as those numbers show Crow to be a Master Magus, a fact which puts a spanner into more than one opponent’s scheme.

In “The Lord of the Worms” (1983), Crow’s early career working for the British War Department in World War Two is mentioned, during which he worked to foil Hitler’s occult machinations. His destruction of the eponymous entity is his first step on the road which leads to his first ‘official’ case as an occult investigator in “The Caller of the Black”, wherein he confronts the villainous sorcerer Gedney and the nightmarish entity known only as ‘The Black’. 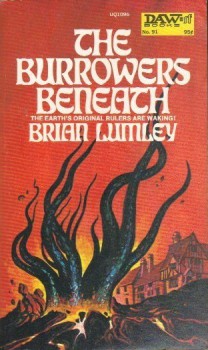 Spurred on by his confrontation with the monstrous in these early adventures, Crow subsequently faces off against deadly ghosts, malevolent remnants, and dark magics with a ruthless idealism. It is this idealism that nearly costs Crow his life in a number of stories, including the aforementioned “The Viking’s Stone” (1977) as well as the later tale, “Name and Number” (1982). In the 1974 novel, The Burrowers Beneath, Crow suffers the ultimate fate of all those who seek to tilt at Lovecraft’s ancient and unknowable windmills. Luckily, he got better by 1975’s The Transition of Titus Crow and was back to face off with the heavy hitters of the Cthulhu Mythos by 1989’s Elysia.

Besides the standard card catalogue of occult reference material, with the old Lovecraft circle standbys augmented by Lumley’s own additions, such as the ‘G’harne Fragments’ (which play an important part in The Burrowers Beneath) and the ‘abhorrent Cthaat Aquadingen’, Crow employs a variety of mystical tools in his battle against evil, including the Mnar Star Stones, a professional grasp of numerology and a magical grandfather clock with an atonal rhythm and a built-in laser cannon. 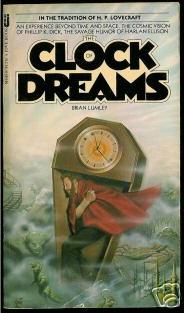 Too, Crow is aided in his fight against evil by his sometime assistant/apprentice Henri-Laurent De Marigny, son of Etienne-Laurent De Marigny, a minor character from HP Lovecraft and E. Hoffman Price’s collaboration, “Through the Gates of the Silver Key”. While functioning at times as a bumbling Nigel Bruce style assistant, De Marigny proves that he is a hero in his own right in the story “The Mirror of Nitocris” (1971), and then later in the 1978 novel, The Clock of Dreams.

Together, the two men take the fight to the so-called Cthulhu Cycle Deities (or ‘CCD’) in a campaign that extends for six books, and is waged across continents, planets, galaxies, realities, and finally time itself before reaching a successful (albeit controversial) conclusion in Elysia.

In that respect above all others, Crow is quite different from peers like Anton Zarnak. Unlike many occult detectives, Crow has seemingly achieved a final, lasting victory (however pyrrhic) and his work is, at least for the moment, finished.

‘Crow has gone, dweller now in Elysia. Nothing now remains of him in this earth.  Or does it…?’

Thanks for writing these. Learned about several new writers/investigators and fun stuff about ones I’m already familiar with.

I’ve gotten a kick out of a Titus Crow stories but the novels always looked a little over the top and cheesy. I think I need to give them a second chance.

I’ve been reading Mr. Lumley’s work since the late 70s when „Burrowers Beneath“ came out. Regardless of what you think of his Titus Crow books, I feel that he has been on of the most consistently entertaining writers in the genre. The whole Crow series is so wonky that you just have to let go and roll with it. The same goes for his „Primal Lands“ Sword&Sorcery stories and his „Dream Lands“ books. They are pure pulp entertainment and, I think, a joy to read. He can also write Mythos and straight up horror stories that are tops of their field and dead serious with out any of the playfulness that’s found in lots of his work. I wish that he would be given more creidt and not just be known at the „Necroscope“ guy. Some of his works are much stronger than others, but I’ve never ever felt cheated after reading something he wrote.

I quite agree. Personally, I quite like the ‘Dreamlands’ series, and I rank it quite high on my list of favourite Lovecraft pastiches.

And I agree that everything after “The Burrowers…” is pretty much a ‘give in and roll with it’ sort of series, but that’s why I enjoy ’em, honestly.

EDIT: Also, for the record, that damn clock is awesome.

I don’t know about the short stories, but all the TItus Crow novels seem available from TOR e’books (at least, on Amazon for Kindle.)

I wonder how much it takes to max out a Kindle? I might be finding out, soon!

[…] such, little about him is revealed. Unlike Titus Crow, Janus appears on stage fully formed and fighting fit. There are few hints as to his previous life […]

[…] and been frightened by it into a haunted and semi-reclusive retirement, Shrewsbury is more akin to Titus Crow—he is an active combatant in a war in which humanity is, at best, a pawn and at worst, food for […]

[…] one can see the antecedent of such later two-fisted occultists as John Thunstone, Anton Zarnak and Titus Crow. Thunstone, created by Quinn’s contemporary (and friend) Manly Wade Wellman, often cameos in the […]