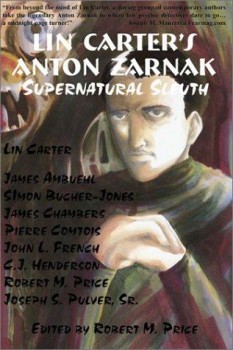 Lin Carter’s Anton Zarnak is a man of mystery. With a jagged streak of silver running through his black hair from his temple to the base of his skull and his exotic features and peculiar mannerisms, Zarnak is almost as outré as the enemies he fights. With a startling knowledge and a somewhat sinister history, Zarnak battled evil in three stories penned by Carter — “Curse of the Black Pharaoh”, “Dead of Night”, and “Perchance to Dream” — as well as in a half dozen or so more contributed by the likes of Robert M. Price, CJ Henderson, Joseph S. Pulver Sr. And James Chambers. All of these stories, for those interested, are collected in Lin Carter’s Anton Zarnak: Supernatural Sleuth from Marietta Publishing.

Like the pulp characters Carter based him on, Zarnak is something of a Renaissance man. Educated at a number of prestigious universities, including the Heidelberg (where he studied theology with a certain Anton Phibes, according to “The Case of the Curiously Competent Conjurer” by James Ambuehl and Simon Bucher-Jones), the Sorbonne and Miskatonic University, he is an accredited physician, musician, theologian and metaphysicist. He speaks eleven languages and has one of the finest and most complete collections of occult literature in existence. His home drifts like a soap bubble between Half-Moon Street in London, No. 13 China Alley in San Francisco and a cursed apartment building in New York; always decorated in oriental splendour, it is filled to bursting with esoteric paraphernalia, including a hideously decorated mask of Yama which always hangs in a place of honour above Zarnak’s desk.

And, as the saying goes, ‘so a man’s home, his mind’ — Zarnak is the proverbial odd duck. By turns consoling and caustic, arrogant and affectionate, and almost inhumanly ruthless, Zarnak is no comforting Judge Pursuivant or soothing John Silence. He is singularly and irrepressibly Zarnak.

Yes, I can help you. But I can promise nothing!

The Zarnak stories, like Robert E. Howard’s Conan, are perhaps best taken not as linear escalation (despite the wonderful work done in that regard by Matthew Baugh) but rather as a mythic cycle. Zarnak is bigger-than-life and a hero-with-feet-of-clay, moving between extremes of archetype throughout the stories. In “Curse of the Black Pharaoh”, Zarnak is pulp-perfect; there’s no fear of him losing his battle with the devil-mummy of Khotep. In other stories, such as Carter’s second Zarnak story “Dead of Night” or “Keeper of Beasts” by James Chambers, Zarnak is very much on the back foot, scrambling for time he doesn’t have and a solution that won’t come in order to save those who’ve come to him for aid. Zarnak fails in both cases to accomplish what he set out to do, though his failure is mitigated by the perfidy of the victims themselves. 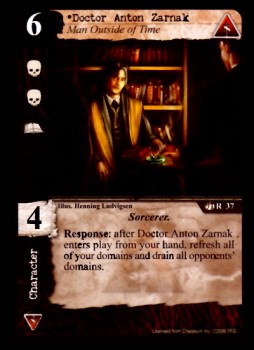 Of Zarnak’s origins, sources differ. Some hint that he was once a simple country doctor whose wife and newborn child were ripped from him by the fangs and claws of a werewolf. His hunt for the beast led him to become the world’s preeminent occultist. Other stories say that he stalked the snows of the high plateau of Leng as the lord and master of the hideous Tcho-Tcho people, and was the mouthpiece of the twin nightmares Zhar and Lloigor. Still others claim he is merely the next in a long line of supernatural defenders stationed at the strange house at No. 13 China Alley in San Francisco, trained in a distant monastery to confront the unimaginable horrors that lurk unseen along the borders between this world and the next.

Regardless of his origins, Zarnak stands as a fiercely intelligent and fearless sleuth and monster hunter. God, demon, beast or ghost, he pursues them all with exuberance and an almost diabolical mania. He is aided in these hunts by a grimly loyal man-servant, Ram Singh. Like Zarnak, Singh is something of an enigma. Some say that he owes Zarnak a debt of honour for rescuing him from a weretiger in his native India. Others say that Singh is the servant of whoever resides in No. 13 China Alley, and that his service to Zarnak is grudging at best. A Rajput or a Sikh depending on the story, Singh is the scion of a warrior caste with the skills to back it up. Swordsman, gunman, and occasional strangler and bone-breaker, Singh acts as Zarnak’s strong right hand, shielding his master from physical attack.

Besides Singh, Zarnak has a number of acquaintances, among them Anton Phibes, Dr. Stephen Strange and Jules de Grandin, who are all frequently mentioned in the stories, both by Carter and otherwise. Zarnak has fought side-by-side with Steve Harrison, Inspector Legrasse and Teddy London as well. These crossovers (acknowledged or otherwise) serve to add to the super-heroic nature of Zarnak. If HP Lovecraft’s Cthulhu Mythos had a Superman analogue, it would be Anton Zarnak. He displays both great power and great responsibility, and his struggles often encompass great odds, whether global, dimensional or personal.

And when those odds finally prove too great, as Matthew Baugh so eloquently puts it, Zarnak “…leaves the world, not through death, but with the assumption of a new struggle.”

[…] that respect above all others, Crow is quite different from peers like Anton Zarnak. Unlike many occult detectives, Crow has seemingly achieved a final, lasting victory (however […]

[…] Crow, who won an unprecedented victory, or Zarnak or even Thunstone, who defeated their personal devils time and again, Laban Shrewsbury struggles […]

[…] In de Grandin one can see the antecedent of such later two-fisted occultists as John Thunstone, Anton Zarnak and Titus Crow. Thunstone, created by Quinn’s contemporary (and friend) Manly Wade Wellman, often […]