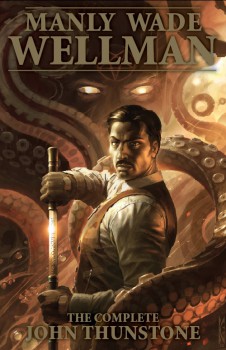 Manly Wade Wellman is responsible for the creation of a number of supernatural sleuths, occult detectives and werewolf punchers, including Judge Pursuivant. But, arguably one of the more well-known of Wellman’s coterie of heroes is John Thunstone. Big and blocky, with a well-groomed moustache and eyes like flint, Thunstone is an implacable and self-described ‘enemy of evil’. He hunts it with the verve of a Van Helsing and strikes with the speed and viciousness that puts Anton Zarnak to shame.

-John Thunstone, “Rouse Him Not”

Thunstone made his first appearance in Weird Tales in the November 1943 issue with “The Third Cry to Legba”, which was followed  by “The Golden Goblins” in the January 1944 issue of Weird Tales. Every other issue of Weird Tales in 1944 saw a new Thunstone story, with “Hoofs” (March), “The Letters of Cold Fire” (May), “John Thunstone’s Inheritance” (July), “Sorcery from Thule” (September) and “The Dead Man’s Hand” (November) appearing in rapid succession. 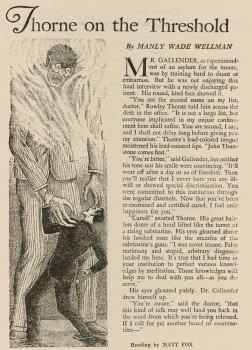 1945 saw a further four stories in Weird Tales-“Thorne on the Threshold” (January), “The Shonokins” (March), Blood from a Stone” (May), and “The Dai Sword” (July). Thunstone only appeared in the pages of Weird Tales twice in 1946, in the March and July issues in the stories “Twice Cursed” and “Shonokin Town”. The final three stories-“The Leonardo Rondache”, “The Last Grave of Lill Warran” and “Rouse Him Not”-appeared, respectively, in the March 1948 and May 1951 issues of Weird Tales, with the final John Thunstone story appearing more than thirty years later in the fifth issue of the Lin Carter edited fanzine, Kadath. There were two subsequent Thunstone novels-What Dreams May Come in 1983 and The School of Darkness in 1985.

Beyond this, there was also the seminal episode of the anthology TV series ‘Monsters’, which saw actor Alex Cord play an intense and business-like John Thunstone in a wonderfully creepy adaption of “Rouse Him Not”.

Throughout these stories, regardless of medium, Thunstone remains a dedicated opponent of evil in all of its guises, though the origin of his one-man crusade is never delved into by Wellman. Thunstone, like many pulp heroes, sprang fully formed from his creator’s imagination and remained largely unchanged throughout his career.  And what a career it was!

Only Carter’s Anton Zarnak or Seabury Quinn’s Jules de Grandin fought as many world-shaking menaces as Thunstone matched muscle and wit against in his time. Armed with a silver sword-cane gifted to him by Wellman’s phantom-fighting patriarch, Judge Pursuivant, as well as a nigh encyclopaedic knowledge of the occult learned at the feet of other enemies of evil, including the aforementioned de Grandin (whom is mentioned as Thunstone’s mentor and friend in at least four of the stories, including “The Last Grave of Lill Warran”), Thunstone faces off with a diverse cast of (occasionally re-occurring) enemies. 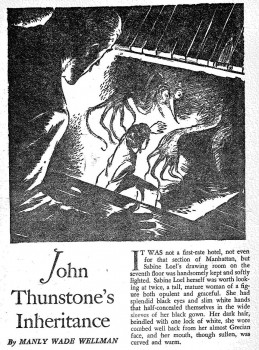 Among these are the arch-occultist Rowley Thorne and the pre-human Shonokins. Thorne, a seeming combination of M.R. James’ villainous rune-caster Julian Karswell and Aleister Crowley, is a burly, bald-headed menace to humanity. He routinely bargains with outer monstrosities for powers which he inevitably attempts to inflict on his enemies, of whom Thunstone is first. Thorne made his first appearance fittingly enough in the first Thunstone story, and came back for a rematch no less than three times, including in the novel, The School of Darkness. Indeed, one short story, “Thorne on the Threshold”, was entirely devoted to Thorne, with Thunstone only appearing at the very end.

Next to Thorne, the Shonokins were Thunstone’s most insidious opponents appearing several times over the course of the series. A strange pre-human race desirous of reclaiming that which they have lost, the Shonokins claim to have ruled the entirety of North America before the arrival of the first humans. Each and every Shonokin is a sorcerer on par with Rowley Thorne, and their cunning is wholly alien. More often than not, only their inability to stand the sight of a dead Shonokin saves Thunstone from their powers and the latter takes advantage of this weakness with brutal efficiency.

More so than many of his literary peers, Thunstone is less a detective than he is a soldier, serving a higher power in an unending war against the unholy and unnatural.  He employs none of Carnacki’s technological tricks, or John Silence’s spiritual remedies, instead relying only on his own two hands and his skill with a silver sword-cane supposedly forged by Saint Dunstan himself. In this aspect, Thunstone resembles Howard’s Kirowan, though he lacks the haunted wanderer’s gloomy outlook. If anything, Thunstone is surprisingly optimistic, given the threats he faces on a seemingly daily basis.

Perhaps this is due to in part to Thunstone’s sociability. Many of the stories revolve around his friends or allies, including medicine men, magicians, and occult adventurers of all types. Rather than being a lone warrior like Zarnak or Kirowan, Thunstone seems quite happy to seek out the help of others and give help when it is required.

Romance too is not absent from the Thunstone stories, with women of all descriptions passing through Thunstone’s orbit. From his long-simmering relationship with the Countess Monteseco to his brief flirtation with the femme fatale Sabine Loel, Thunstone’s blood runs as red and as hot as any of Howard’s barbaric heroes.

Optimism and sociability aside, Thunstone stands as a stalwart sentry over the mundane world; wherever evil rears its head, John Thunstone rises to confront it, pitting the strength of his body and his soul against the fury of Hell. Again and again, he hurls himself into the teeth of the void in order to put right that which is wrong and to prove once more why he is among the front ranks of those who call themselves the enemies of evil.

Josh Reynolds is a freelance writer of modest ability and exceptional confidence. His sword & sorcery novel, Knight of the Blazing Sun is available now from Black Library. In other interesting facts, he once accepted a goat in lieu of monetary compensation. It was delicious. Feel free to cast aspersions on his character at his blog, HUNTING MONSTERS.

Hmm. Guess I’ll have to add Thunstone to the reading list now. Thanks!

That’s why I write these! And you really should…John Thunstone is awesome.

I’ve been waiting for the Haffner Press book since I learned about it. One of the “pricey but worth it” books I have on my list for this year.

Me too. I’ve already got the Night Shade hardback, but that Haffner one looks too darn nice to pass up.

Wellman was a great story teller.

Could hang in there with best of the Olde Tyme Weird Tales folks.

[…] Wade Wellman’s The Third Cry to Legba and Other Invocations and Fearful Rock; […]

[…] Henry Kuttner’s Terror in the House: The Early Kuttner, Volume One, and the upcoming The Complete John Thunstone, by Manly Wade […]

[…] their creator, properly equipped and significantly knowledgeable about the enemies they encounter. Thunstone, Carnacki, and the rest are experts in the occult, even as Sherlock Holmes is an expert in […]

[…] Crow, who won an unprecedented victory, or Zarnak or even Thunstone, who defeated their personal devils time and again, Laban Shrewsbury struggles on, outmatched, […]

HUNTING MONSTERS | Manly and Me

[…] months of discovering him, it seemed like I could read and read and never run out of stories about John Thunstone, Judge Pursuivant and John the Balladeer. But I did. Luckily, there were enough that I could […]

[…] who came after. In de Grandin one can see the antecedent of such later two-fisted occultists as John Thunstone, Anton Zarnak and Titus Crow. Thunstone, created by Quinn’s contemporary (and friend) Manly Wade […]