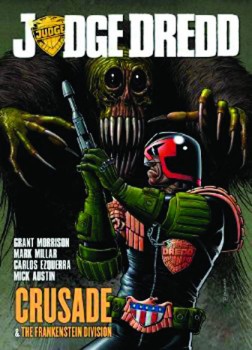 So the enticing artifact at right showed up in my mailbox last week. Why, I have no idea. Every week we receive about a dozen books for review here at the Black Gate rooftop headquarters, where they are diligently farmed out to the hard-working Review Corps, bless ’em. Usually they’re the latest paperback fantasy novels (the books, not the Review Corps). Or maybe advance review copies, or RPGS, or the occasional board game. But comics? Not so much.

Not that comics aren’t welcome. Especially (let’s face it) Judge Dredd comics. ‘Cause Judge Dredd, he’s the man. The last line of defense in a post-apocalyptic megacity perpetually on the verge of chaos and destruction! With no pension plan, and not even a decent sidekick. Trust me, if all you know of officer Dredd is the cheesy 1995 Sylvester Stallone movie, you’ve missed out on three decades of great comics. Check out Judge Dredd vs. Aliens. No, seriously, check it out. It’s awesome.

Anyway, here’s the blurb for this one:

In a riot of violence at the ends of the Earth, when a scientist returns from a 15-year deep space mission claiming to have a message from God himself, judges from all of the world’s Mega-Cities race to Antarctica to try and claim the secret for themselves. Among them is the toughest future lawman of them all – Judge Dredd – but in the scramble to secure the scientist, the judges all brutally turn on each other as the prize proves too much to resist! Meanwhile, a deadly agent from one of the world’s superpowers stalks through the warzone, hoping that the confusion will ease his path to securing the secrets of the cosmos!

In the back-up story The Frankenstein Division by Mark Millar and Carlos Ezquerra, the sinister judges of East Meg create the ultimate judge by stitching together pieces of their best. But when it goes on the rampage it heads for Mega-City One and the one man responsible for the death of its many ‘donors’ – Dredd himself.

Come on, like you needed the blurb after you saw that cover. A slathering monster, and Judge Dredd armed only with a sidearm and a stern expression? Admit it, you were sold 90 seconds ago. (Click on the image for a larger version. Come on, try it! There. Wasn’t it worth it?)

Here’s the 411 so you can sound cooler than your friends: Judge Dredd: Crusade was written by comic superstars Grant Morrison (Batman and Robin, All Star Superman) and Mark Millar (Kick-Ass, The Ultimates), and illustrated by Judge Dredd co-creator Carlos Ezquerra, and Mick Austin. How did they get Carlos Ezquerra to return to illustrate a new story? They didn’t — this is a reprint from 1994/95. But at least it has a great new Brian Bolland cover. (Love the cover. Did I mention?)

Word on the grapevine is there’s a new film in the works (Dredd, staring Karl Urban, scheduled for release this September), which explains the timing. But whatever. I’m just glad to see a little love for some classic Judge Dredd. The heck with the Review Corps — I’ll be curling up with this one myself this evening. If my teenage sons don’t find it first.