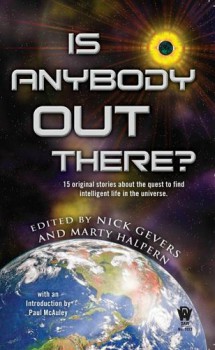 There are a multitude of conjectures to Fermi’s question, many of which border on the theological, if not outright fantastical. Which is why it makes great fodder for science fiction speculation. After all, it is part of the job description to envisage beings from other worlds. For the most part, though, this speculation is limited to imagining creatures much like us with green skin and pointy ears who deep-down share our prejudices and failings. Because, the alien is us.

Indeed, the notion of the alien frequently serves as a metaphor for the zeitgeist, such as the Asian features of Ming the Merciless in the Flash Gordon movies on the eve of World War II, or the sinister disguised alien amongst us (i.e., Communist infiltrator) in the Cold War era of Joseph Campbell’s “Who Goes There?” In this context, the alien is a mere prop. Their creators aren’t interested in the Fermi Paradox anymore than postulating the physics of faster-than-speed-of-light travel. It is a convenient means to tell a story. The notable exceptions include Stephen Baxter’s Manifold sequence, and, perhaps the best of all, Stanslaw Lem’s Fiasco.

All of which brings us to Is Anybody Out There?, edited by Nick Gevers and Marty Halpern, a collection of stories expressly commissioned to address the Fermi Paradox. However, most of these tales are less interested in proposing an answer than “the aliens are us” tropes of classic Golden Age SF. Indeed, Alex Irvine’s “The Word He Was Looking For Was Hello” typifies this approach:

Because we did not have Us, we invented Them. Then, when They weren’t where and when and how They were supposed to be, We castigated Them for it while secretly damning ourselves for fools because We had thought They might be there.

Irvine does provide a thought provoking spin on this topic, but it really has nothing to do with the Fermi Paradox per se. In fact, most of the stories don’t, except as a plot device. Not that there is anything wrong with that, just that there is perhaps a little bit of missing truth in advertising.

For example, I really liked Michael Arsenault’s “Residue,” in which a presumably married couple ponder the universe, but end up pondering themselves. One partner is reluctantly dragged outside away from the television to look at the night sky, while the other (and it’s never exactly clear who is talking to whom, the story is told entirely in dialogue, without any “he said,” “she said”) ticks off all the theories for why there hasn’t been extraterrestrial contact. The result of the discussion is to make better contact between each other. One small step for two human beings, however insignificant they may be in the larger scheme of things. Good story, but the Fermi Paradox is an aside to the larger point.

Similarly, in “The Vampires of Paradox,” James Morrow also employs the Fermi Paradox as a plot contrivance, one which you might not immediately guess were it not in a collection about the question. “Permanent Fatal Errors” by Jay Lake suggests that the ultimate answer is largely besides the point. Tales such as Ian Watson’s “A Waterfall of Lights” and “Timmy Come Home” by Matthew Hughes are Twilight Zone exercises in which the aliens are here, we just have not risen yet to a sufficient level of consciousness, technological or spiritual, to know it yet.

Paul Di Filippo’s “Galaxy of Mirrors” does posit an answer that relies on a hoary SF cliché that major genre magazine writing guidelines explicitly state automatically get tossed into the rejection pile. So how does a widely regarded writer in the field get away with such a groaner? Okay, it is funny. And it does, unlike its peers, actually address the question raised by the Fermi Paradox. But, come on, would any writer who didn’t have name recognition get away with this? Even when the point is to have fun with one of the classic plotlines that every aspiring 12 year-old SF writer has drafted under the youthful delusion it is original and clever?

Along the same lines, “Report from the Field” by Mike Resnick and Lezli Robyn is, as you have already guessed, a report from aliens about why they shouldn’t make contact with dangerous humans. Some funny lines here, but pick up an SF magazine from the 1950s to see that it’s been done before.

Speaking of SF writers who have gone before, Yves Meynard offers a nice meditation on the late-in-life circumstances of a once-successful genre author in “Good News from Antares.” Okay, characters who may or may not be figments of our imagination aren’t exactly original, either, but Meynard brings a fresh take to it.

The best story here that actually tries to tackle the Fermi Paradox is David Langford’s “Graffitti in the Library of Babel,” a cyberpunk riff on Borges.

As it turned out, they had no sense of drama. They failed to descend in shiny flying discs, or even to fill some little-used frequency with a tantalizing stutter of sequenced primes. No: they came with spray cans and felt tips, scrawling their grubby little tags across our heritage.

Over all, Is Anybody Out There? provides some entertaining diversions, without ever actually coming up with any answers. Then again, no one really has.

David Soyka is freelance copywriter, a former newspaper reporter and English teacher, author of ficiton and non-fiction, and a DJ at WTJU-FM. Find him online here.