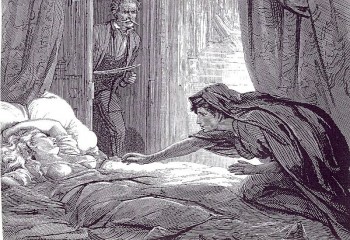 It’s always best to begin at the start, to quote no one in particular. We’ll start with the introductions: my name is Josh Reynolds and I wanted to be a detective when I grew up…no, not just a detective.

I wanted to be an occult detective. I wanted to be Donald Pleasance hunting down the Horse of the Invisible, or Peter Cushing making a cross out of candlesticks and shoving them right all up in Christopher Lee’s fang-y mug. I wanted to be Carl Kolchak, Thomas Carnacki and Dr. Strange. I wanted to bust up eldritch cults, Draculas and devil-worshipping biker gangs.

Unfortunately, my wife won’t let me. So, instead, I scratch the monster-hunting, ghost-busting itch by writing…well, stuff like this. ‘This’, of course, being ‘The Nightmare Men’ (of which this is the first installment, natch), a series of semi-regular essays on the subject of occult detectives; one part introduction, one part analysis, all awesome, all the time. Basically, if you’ve ever wanted a primer on occult detectives, the Nightmare Men is for you. And we begin with the granddaddy of them all…

“I believe the entire natural world is but the ultimate expression of that spiritual world from which, and in which alone, it has its life.”

It’s an interesting way to introduce literature’s first actual occult investigator, to say the least. He’s the ghost of a memory, his faint handwriting spider-scrawled across battered notebooks, detailing over 243 cases of supernatural mischief and malice; the ghost-breaker as ghost, in a sense. It’s a shame Le Fanu documented only five of those hundreds of cases, and only one that Hesselius was actually physically present for. It’s these five cases that make up In A Glass, Darkly.

Introduced as a German medical doctor with an extremely open mind and a more than abiding interest in the occult, Doctor Hesselius is first mentioned in the introduction to the aptly titled “Green Tea”. According to the narrator, Hesselius is an avuncular man, blessed with easy circumstances. Well-off enough to fund his travels, it’s obvious from his notes that he’s traveled the width and breadth of Europe, at the very least, and possibly Asia.

He’s depicted as an enthusiastic spiritualist, immensely knowledgeable about both medicine and the occult. To Hesselius, it is obvious that the natural world and the spirit world are inextricably linked. Hesselius published numerous papers in his career, including ‘Mortis Imago: An Essay on the Drugs of the Dark and Middle Ages’ and ‘The Interior Sense and the Conditions of the Opening Thereof’. Le Fanu includes some reference to one or more of these essays in every one of the Hesselius stories, bringing them into the same realm as Lovecraft’s various obscene grimoires or Hodgson’s Sigsand Manuscript.

The introduction to the character is a posthumous one, as mentioned above. Hesselius, a man of advanced years, has passed on only recently according to the prologue of “Green Tea”, though we’re never told exactly how. The introduction is made by an unnamed narrator, ostensibly Hesselius’ assistant and the executor of his estate.

We know that this assistant was a surgeon himself, though his career was cut disastrously short by an accident involving a scalpel and his fingers. And he claims that it was Hesselius himself who helped him overcome his disability. Other than that, we have only his obvious, Watson-like devotion to Hesselius to judge him by. A phantom biographer for the phantom fighter.

Of the five stories in the collection (“Green Tea”, “The Familiar”, “Mr. Justice Harbottle”, “The Room in the Dragon Volant”, and “Carmilla”), Hesselius appears onstage only in the first, his involvement in the others being limited to pre and postscripts with his analysis and thoughts on the phenomena described.

However, it’s that very analysis that gives us a window into Hesselius’ character. For Hesselius, the occult is a science. Like Hodgson’s Carnacki, or Blackwood’s John Silence, Hesselius is a rational man in an irrational world, attempting to make that which he studies fit into its proper place. The unnatural explained as natural.

Granted, unlike either of those characters, Hesselius doesn’t do much face-to-face confronting of unnatural entities, spiritual terrors or Lovecraft’s patented ‘Things From Beyond’. In fact, the one actual flesh and blood monster in the collection, Carmilla Karnstein, is dealt with by another monster-hunter altogether, a Styrian vampire-hunter named Baron Vordenburg (who, it should be noted, was perhaps a strong inspiration for Stoker’s archetypal Abraham Van Helsing). Hesselius only investigates the proceedings after the fact, acting less as an investigator, and more a dedicated archaeologist of the extraordinary.

The image of Hesselius as the curious practitioner dominates the brief glimpses we get of him in Le Fanu’s writing. In “Green Tea”, the story is told in epistolary form, via Hesselius’ letters to a colleague on the strange events surrounding the opening of a hapless country vicar’s ‘third eye’ and the demonic incursion that results.

Hesselius approaches the case as a medical issue first, then, later, as a psychological one. Despite his belief (or perhaps because of it) in the truth of the events-that an infernal force is at work-Hesselius contends that the problem can be dealt with as easily as any other physical or mental ailment. With the right type of treatment, even demonic possession can prove curable.

It is this belief on the part of the character that truly sets him apart from those who would eventually follow him, i.e. Carnacki and the like. Where other characters approach the supernatural as something out of place that must be corrected or eliminated, Hesselius maintains that it is the most natural thing in the world and must be dealt with as such. Demons are no more dangerous than boils, vampires merely ambulatory anemia.

Spirits, demons, vampires, are all merely categories of disease (though of the soul, rather than body or mind) and can be combated as such. Hesselius strips the glamour from the supernatural, rendering it natural, and thus no longer frightening to either its victims or the reader.

The style in which Le Fanu composed the Hesselius stories does much to add to this sensation of the unnatural as natural. There’s a particular dryness to the stories, as if they were being recounted from a distance, by a disinterested third party.

The supernatural occurrences are given full shrift, but never amplified. Le Fanu, and by extension Hesselius, was seemingly less interested in chilling the reader’s marrow, as merely making them aware of the happenings themselves as points of intellectual curiosity.

While this has the effect of limiting the visceral excitement of the stories, this approach also makes Hesselius and his strange cases seem altogether more credible. Unlike other, later occult investigators, Hesselius never gives the impression that he views his world in terms of good and evil. Rather, merely in terms of health and illness.

That makes him a more comforting figure than his literary descendants. If Van Helsing and his ilk are the paladins of night’s shadowed reaches, fearlessly plunging into the dark to combat the horrors therein, then Hesselius is the kindly old man who thinks to merely bring a torch and show the reader that things aren’t really as bad as all that after all.

Mr. Reynolds, thanks for taking the time to write this for us! This is one of the things I love about Black Gate; I can’t quite imagine it appearing in the other outlets I follow.

I’m a latecomer to the ancient greats of fantasy: Howard, Lovecraft, Smith, Dunsany, Hodgson, and such. I finished Stoker’s Dracula only this last year. I keep catching glimpses of the occult detective and the figure intrigues me. Very much looking forward to the rest of the series. Maybe you could include some links to public domain sources where we could see these masters in action?

You know what? That’s a great idea. In fact, I think I’ll do that with my next post. And I’m glad you enjoyed the post!

THE MONSTER MEN at BLACK GATE « My Blog

[…] whose story THE SLAUGHTER FLOCK is featured in the upcoming DARK WORLDS 6, has a feature over at BLACK GATE MAGAZINE. He is profiling occult detectives. The first post covers Shereden LeFanu’s Doctor Martin […]

[…] humor and quirky impatience, at first glance Silence appears little different from his predecessor, Le Fanu’s Dr. Hesselius, another ‘psychic doctor’. But as his confrontation with the malevolent possessing entity of “A Psychical Invasion” […]

Black Gate » Blog Archive » The Start of Something Strange

[…] master of the Dream Dimension. Strange is a kind of occult detective, a figure in the tradition of Martin Hessselius or John Silence (or, more closely, Mandrake or Zatara). Unlike them, though, he’s more magician […]

[…] distinct lack of fear bolstered by harsh economic necessity. Not for her the remote recordings of Dr. Hesselius or the psychical solutions of John Silence. Instead she pounced willy-nilly on lycanthropes and […]

[…] Dracula, when the former comes into play Van Helsing’s expertise is unquestioned. Much like Dr. Hesselius or Carnacki, there is a veneer of the practical sciences over Van Helsing’s folkloric […]

“A Doctor, Darkly” « THE ADVENTURES OF THE ROYAL OCCULTIST

“The Diehard” « THE ADVENTURES OF THE ROYAL OCCULTIST

[…] distinct lack of fear bolstered by harsh economic necessity. Not for her the remote recordings of Dr. Hesselius or the psychical solutions of John Silence. Instead she pounced willy-nilly on lycanthropes and […]

[…] country house widely believed to be haunted. Dr. John Montague is a would-be ghost-breaker (a ‘nightmare man,’ as we like to say around these parts) explicitly compared to “intrepid nineteenth-century […]

[…] the sheer vibrancy of de Grandin from the start. De Grandin, like his more passive predecessor Dr. Hesselius, is a physician, and approaches the supernatural as an illness to be confronted. Unlike the kindly […]

[…] the sheer vibrancy of de Grandin from the start. De Grandin, like his more passive predecessor Dr. Hesselius, is a physician, and approaches the supernatural as an illness to be confronted. Unlike the kindly […]