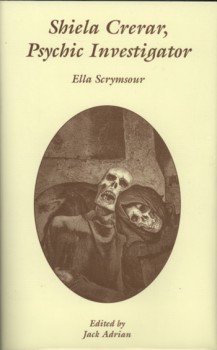 Shiela Crerar, psychic investigator and adventuress, first burst into public view in the pages of The Blue Magazine in 1920 with “The Eyes of Doom”. The obscure creation of the intriguingly enigmatic Ella Scrymsour, Crerar battled ghosts, werewolves and gibbering ghouls of all types from May of 1920 to October of that same year, appearing in a grand total of six stories which vanished into the literary ether when The Blue Magazine folded not long after. Luckily for aficionados of occult sleuths, Ash Tree Press released a lovely collection in 2006, marking the first time these stories were collected or reprinted in any form.

Beginning with the aforementioned “The Eyes of Doom”, in which Crerar confronted the eponymous vengeful spirit, the series progressed with “The Death Vapour”, “The Room of Fear”, “The Phantom Isle”, “The Werewolf of Rannoch”, and “The Wraith of Fergus McGinty”. Unlike her masculine counterparts in the occult detective business, Crerar is a two-fisted phantom fighter, wading into supernatural situations with little more than guts, brains and a distinct lack of fear bolstered by harsh economic necessity. Not for her the remote recordings of Dr. Hesselius or the psychical solutions of John Silence. Instead she pounced willy-nilly on lycanthropes and luminescent manifestations, sinking her teeth into matters both mundane and malevolent with equal determination.

Say hello to Shiela Crerar, the Scottish terrier of the psychic set.

“A pair of eyes was gazing at her, eyes so mournful, so full of grief that Shiela felt her own fill with tears of sympathy…”

-Ella Scrymsour, “The Eyes of Doom”

In the opening pages of “The Eyes of Doom”, Crerar’s situation rests at the far sharp end from that of John Silence. Left an orphan by the abrupt death of her uncle, the nineteen year old Shiela is forced to lease out her family’s ancestral Scottish home and make her way to London to look for work. There, running low on funds and friends, she is confronted by a mysterious man who encourages her to use her heretofore unknown psychic abilities for the good of mankind.

Crerar promptly does so, albeit by putting an ad in the paper and advertising her abilities to the highest bidder. What her strange benefactor thought of this we are never to know, as he doesn’t reappear (possibly out of embarrassment). Crerar’s mettle is unquestionable, given the era in which she lives and the expectations which dog her, and it is further tested by her first encounter with the justice-hungry spectres of “The Eyes of Doom” when her ad is answered and she returns to her native Scotland for a spectral showdown. As becomes her practice, Crerar hurls herself headlong into matters and pits her will against that of the ‘Kildrummie Weird’ without either hesitation or preparation.

By the end of the first story in the canon, Crerar has laid the Weird to rest, refreshed her bank account and acquired a love-struck admirer in the form of Stavordale Hartland, nephew of the unfortunate Lady Kildrummie. Hartland flits in an out of the series, lovelorn and eternally worried until finally getting his heart’s desire in “The Wraith of Fergus McGinty”, when Crerar at last acquiesces to his constant stream of marriage proposals and gives up her adventuresome life for quiet domesticity.

But before that, Crerar takes on a number of tough and nasty ghouls with little more than a torch and moxie. It makes for an interesting contrast with other, more well-known occult detectives. Crerar takes no precautionary measures and has little more than a layman’s working knowledge of the occult to guide her. Instead, she relies on common sense and that particular brand of Scottish toughness that compels her to face the darkness head on, with eyes wide.

This gets her into trouble more often than not, however. In “The Death Vapour”, Crerar faces off against a vicious satanic presence and gets badly burned and temporarily blinded for her troubles. And in “The Werewolf of Rannoch”, she rapidly flits between being the predator and the prey as she tussles with the titular monster in the wintry Highlands. None of these travails seem to dampen her enthusiasm for bashing beasties over the head with handy items or hurling herself on them with wildcat savagery. 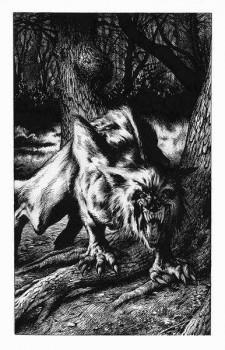 The stories themselves, while utilitarian in prose, are possessed of a more visceral excitement than many other psychic investigation stories of the time. Crerar is a very physical character, always moving, thinking and doing. Where Silence or Carnacki spend most of their time in quiet contemplation, Crerar is in full pulp-heroine mode, tracking werewolves through snowy forests and sleeping in hidden rooms because that’s what it takes to get the job done.

And it is a job, something Crerar never forgets. Where her contemporaries are men of means or public-spirited citizens, Crerar is a professional woman, confronting ancient evils in order to put bread in the bin and butter on the table. Her heroism is a hard thing, motivated by self-interest and, initially, desperation. In the end, it is that fact alone that makes the maudlin conclusion to the series palatable. When Hartland finally ties Crerar down and convinces her to marry him and give up her life of adventure, it makes sense for the times and the character both.

Still, after reading the stories, one can’t help but feel that Shiela Crerar, tough as she was, didn’t give up so easily. Marriage would simply be another obstacle to deal with and if Crerar proved anything in her short run, it was that any obstacle could be overcome if you hit it hard enough, and often enough.

[…] he faces come not through serene practiced omniscience, but via hard graft. Carnacki is, like Shiela Crerar, a sleuth first and an occultist second. His investigations combine the otherworldly and the mundane […]

[…] prototype of almost every urban fantasy/paranormal romance protagonist, Sheila Crerar discovered her psychic abilities even as she was forced to rent out the ancient Scottish castle […]

Public Domain Spotlight: The Eyes of Doom – The Ruinous Reliquary

[…] prose is, as Josh Reynolds tactfully put it, “utilitarian“, but the story is a fun read. It moves quickly and gets the point across, the action is […]