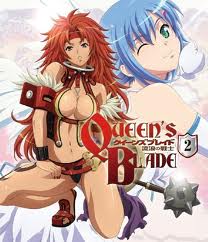 Did you think the only problem with the 80s animated epic Heavy Metal was that there wasn’t enough nudity?

Do you enjoy old swashbucklers with Errol Flynn and Basil Rathbone crossing swords, musing that the only way the fight could be any more thrilling would be if they were both teenage girls? And naked?

Do you have a well-thumbed set of Luis Royo art books?

Then you’d probably enjoy the anime series Queen’s Blade. Or, as I like to style it, Bob Guccione’s Highlander. Finally in Blu-Ray!

The series really is one of Luis Royo’s more pulchritudinous paintings brought to life. It’s all there, the oversized swords, the pneumatically inflated breasts, the time-tested fantasy female warrior attire of g-string, breast-caps, and boots. . . 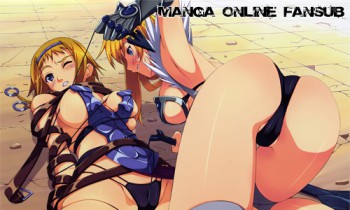 Okay, there is a plot, and some character development, a nicely realized and vaguely Elizabethan world, but that’s a bit like discussing the Zoot/Dingo conflict at Castle Anthrax. No one’s paying attention with several-score young ladies dressing, undressing, bathing, and making exciting underwear.

Every four years in the Queen’s Blade universe the sword-swinging gynocracy comes together for a tournament to determine the next Queen-Champion. Leina, heiress to a powerful princedom, wants to emerge from her father’s plans for her to take over their substantial estate, but I suspect she’s really trying to get away from her perverse sister. She’s nudged along (and tied up by, early on) by rouge-mentor Risty, a Robin Hood figure. With a D-cup. Standing in her way is Leina’s father’s greatest warrior, the Thundercloud General (“It’s raining boobs! Hallelujah”). There’s the usual anime assortment of demons and monsters (including one who fires acid from her breasts).

Of interest solely for the over-the-top fan service, and as a highpoint for those tracing “Sword & Hooters” pop-culture. But I’m not sorry I killed a couple hours with it, just for the sheer wonder of the man-hours that must have gone into modeling all that jiggle.

It should be of some interest that the source of inspiration for that anime is not a manga, or less frequently a novel (Vampire Hunter D), but rather a card game showing the ladies in all sorts of fighting poses. The game was sold in individual character packs and is still in print, with many new ones coming out, including from other franchises.

But, it’s actually inspired by an early rpg era game, forgotten worlds, of the same format. I think the producer actually purchased the rights, and due to being a fan, lots of cameos.