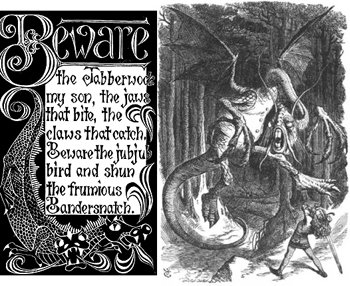 Morning and evening
Maids heard the goblins cry:
“Twas brillig, and the slithy toves
Did gyre and gimble in the rye!”

I AM SO SORRY!

But I couldn’t help myself!

I’m just so excited because the summer issues of Jabberwocky and Goblin Fruit are up!

P.S. I’ll talk about both issues LOTS if you keep reading! Promise! 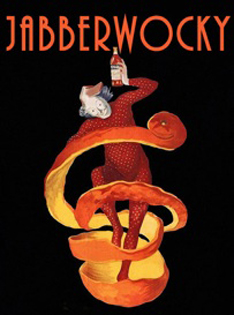 For those of you who don’t know, Jabberwocky is, in the words of Jabberwocky:

“…a monthly, online magazine with each issue continuing in the tradition of offering a combination of poetry and prose.

The elements and bedrock of Jabberwocky can be largely described as the –ical approach: lyrical, whimsical, mythical, in all its forms, particularly short fiction, poetry, and illustrative. There are no boundaries, no restrictions, no genres. If you love the art of the written word, its structure, its flow, its language, we suspect you’ll love Jabberwocky.

Warman’s story, “‘Kitsune’, Fox,” is a post-hole of a story, little but deep. A love story, a shapeshifting story, and a growing up story all in one. “The old vixens warn us of the dangers of falling in love with human boys.” Yes, but fox kit or human child, when do we ever listen?

Personally, I never can resist anything with intimations of demon lovers, and Charlotte Hussey’s poem is no exception. This one’s cool. It starts out with an epigraph by Geoffrey of Monmouth, and the last line of every verse in the poem is a line from the epigraph. COOL STRUCTURE! If I knew the word for that form, I’d tell ya. It starts:

Many times too when I am sitting alone,
he talks with me without becoming visible…

Erik Amundsen (who writes the Fantasyscapes series for Black Gate) received a prompt one day from the Dread Patty Templeton. It was just a picture. And he did such things with it! Here is an excerpt from “Rise and Run”:

“We lived in their houses and slept in our cages, long enough that none of us remembered one of us who remembered living free,”

From here, the story follows the protagonist, fall to rise to run. Oh, it’s a shiversome beast all right.

Sometimes a line of a poem means nothing to you. Nothing logical, at any rate. And yet it still gets you in the gut. It still makes you want to say it aloud, and follow it down a shimmering path that appears, as if in answer to a spell, when the words are spoken.

Such is this line, for me, in Henderson’s “Drifting against the Shoals of Memory“:

“For I have haunted the dark borders of Erebus.” 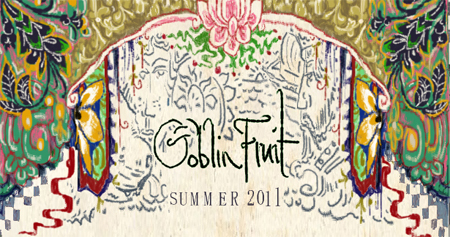 And now for Goblin Fruit.

Goblin Fruit is a quarterly online magazine for poetry “of the fantastical.” We’ve quoted their FAQ before, and we’ll quote it again. GF publishes “poetry that treats mythic, surreal, fantasy and folkloric themes, or approaches other themes in a fantastical way.”

Bourke mourns this age that has sung the gods to silence. Kastin’s quite estival naughtiness in “Said the Satyr to the Wood Nymph” is worth an eyebrow wag and a high blush.

Oh, man. And every time I’ve forgotten how much I love coyotes, someone like Tala Eirsdottir comes along and (O the gaspingly delicious crunchy dang goodness of this poem!!!) reminds me:

Fingertips whorled, etched with the grey grain of growing up twilight-pale, a silhouette, a shadow, cotton-ripple soft as buttered water, hunger the only fat thing under a sky that’ll bite your ankles if it catches you. He’s got old fingers, old eyes, old cotton gone periwinkle blue; he’s just a kid, loose-jawed and scrub-brushed, and he’ll steal your heart while he carries your groceries home, Grandma. Not a wolf, nothing so formal.

Moore’s “Cleaving” is not overtly steamy, but it leaves one with a sort of dew upon the brow. This is what the summertime issue of Goblin Fruit is all about, I think — that DEW!

Hinds went and pulled a u-ey on my heretofore accepted perception of Mlle. Eurydice, with some slick little rhymes to boot! I like the idea of a Red Cross brigade in the Shades. Oh, yes, I do!

Davis gender-bends the Sleeping Beauty tale, and in that one, vicious, little twist, her truth sort of knocked a snort out of me:

You’d never see a princess
(or a piratess, or an orphan
Left landless and shoeless,
Alive on her wits)
Stumble across a sleeper and say,
“Oh, I’ll marry him.

Nin Harris’s “The Domestic Sundial” is sharp and tart enough to make the mouth water. Or is it the eyes? There is a story behind this story. This poem seems to be as much about what is unsaid as what is said. Who is this princess Tun Teja (this is the Wikipedia article that comes up when I Google her), but more importantly — who was her nursemaid?

And what, please tell me, exactly, is a post-modern Cinderella (what’s post-modern, is what I want to know? I never understand these terms. I should spend more time with Wikipedia)? Oh, well. Seanan McGuire will tell you:

I have seen our post-modern Cinderella
Silvering through the faux-Moroccan gloom like someone else’s happy ever after,
Sword on her hip, toes bare against the glass, and I have dreamed of her. 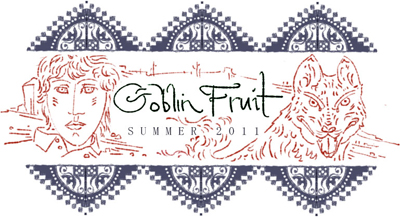 My favorite of this issue — and it’s my favorite because I love sea-things, and because I’ve been meaning for a while to attack the dark side of the Little Mermaid myself, in prose — is probably Elizabeth McClellan’s “The Sea-Witch Talks Show Business.”

Why? Because it’s SEXY. And mean. And… terribly practical. “We only leave traces if we die by violence.” But this sea-witch is not without heart, exactly. She’s just looking out for her own interests, like most of us. She’s willing to talk; she tells us her four tricks of the trade — and even that she’s not mastered the fourth yet. She’d be the toast of any dinner party, if you could get her talking. You get the feeling she’s looking for an apprentice. You’d get the feeling you’d want to be worthy of the position. Man, I’m a sucker for sea-things.

Bohémier’s “Pandora: An Afterthought” is another of those suggestive poems, like a crack in the wall that you think is just a crack until you put your eye to it and see through into another world. The view is narrow, but the unseen horizons are tantalizing! Was Pandora’s box really a dowry urn after all? And if that’s so, what else do I not know that I’ve always thought I’ve known?

Hinds returns after that with another Eurydice variation (4, this time), which makes me think I ought to go back and hunt for 1 and 3 in previous issues. This one is fourteen lines, seven sets of couplets, and a very angry lament. She and Persephone should have a coffee date and talk about men, that’s what I think. Sometime it’s best just to let it all out.

It’s only when he’s drunk
Drunk, and Lord it takes a few
Do the words come dribbling from his mouth
Bourbon burned and silky scratched
Arroyo dry and twisty
Words that melt between my ribs —
Hey, darlin’ says Coyote
When he’s drunk.

Pelaez’s “Frejya” is short but powerful, ripened near to bursting, like a peach or a summer storm. Poems like these don’t need to be talked about. They just need to be read.

“World’s End” — appropriately, the last poem of the Summer Issue — seems to be a questing poem, a past-and-future poem, a character study, all in one slim little verse! I will give you my favorite line, but you must remember that taking these things out of context is a VERY BAD IDEA.

Nevertheless, I’m gonna do it, because… doesn’t it make you dream?

I myself saw creatures without genus
drink from the night sky to quench their thirst
and watch our caravans and cohorts as we passed,
bright-eyed.

There. Now I’ve got you all gussied up and ready to read. Make some tea. Settle into your cushions. Indulge yourself. Then spread the word.

We last covered Goblin Fruit with the Spring 2011 issue.