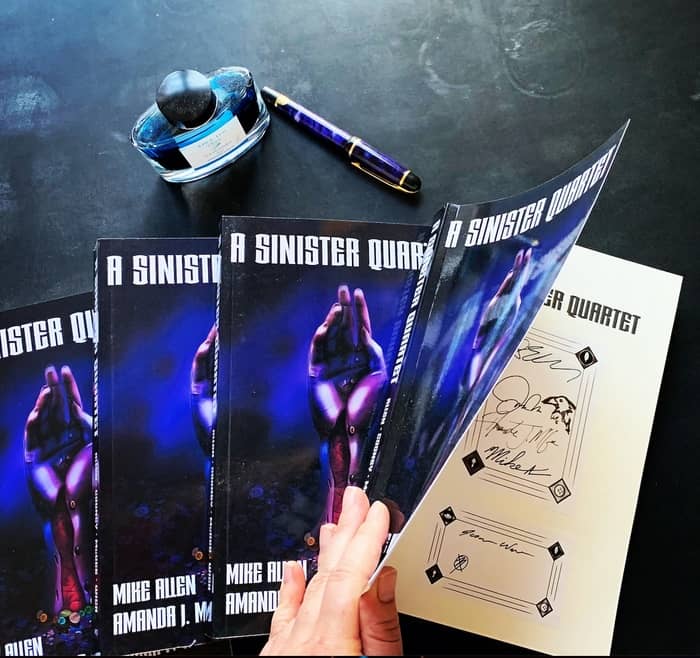 Five days ago, we launched our Great Big Giveaway for four copies of all authors/all artists-signed A Sinister Quartet, out this year from Mythic Delirium. In addition, we promised four new postcards with original art by Paula Arwen Owen!

We asked you to comment at the initial link, or send your comments privately to Mike Allen at Mythic Delirium. We were delighted by the response!

This morning, I drew the lucky four from a virtual randomizer “hat!”

END_OF_DOCUMENT_TOKEN_TO_BE_REPLACED 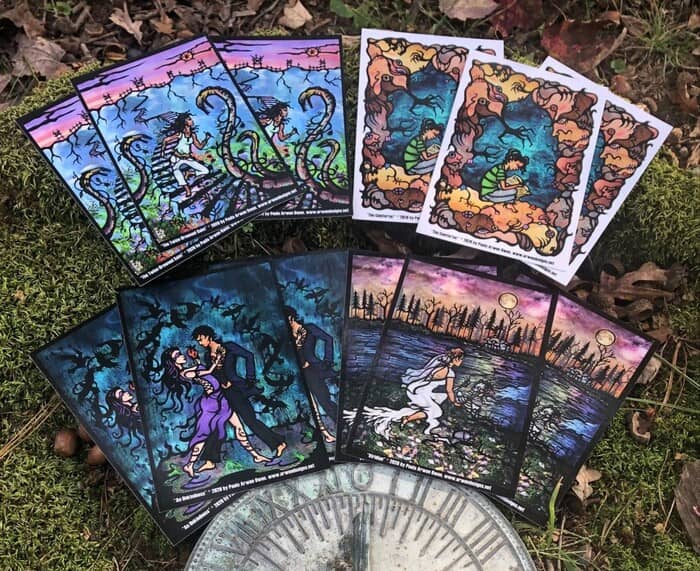 We, the authors of The Sinister Quartet, have done it all this year!

We’ve done ZOOM readings! We’ve made up playlists, recipes, cocktails (and mocktails!) to go with our dark-hearted stories! We’ve done a Reddit AMA, and The Big Idea over at Scalzi’s blog!

Lately, we did that GINORMOUS interview with Zig Zag Claybourne here at Black Gate magazine!

And now, we’ve got PRESENTS! For YOU!

HERE’S HOW IT WORKS.

END_OF_DOCUMENT_TOKEN_TO_BE_REPLACED 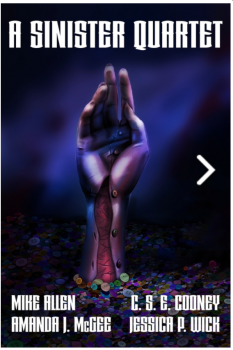 Ah, Horror in the time of Covid! It seems almost superfluous, like a feather boa on an ostrich.

However, we the authors of A Sinister Quartet (Mythic Delirium 2020), have pranced fancily forward on that ostrich! Ostriches piled on ostriches! Feather boas galore! Which feather boas, I might add, sport an unnerving number of teeth and eyeballs.

(Editor and author Mike Allen likes to say of our book: “It’s the fun horror, the kind you consume for imaginative shocks and chills, not the kind that weighs on you like the stones that killed Giles Corey in The Crucible as you helplessly doomscroll through social media.”)

In the spirit of fun then, we approached the rollickingly magnificent Zig Zag Claybourne, who probably has the most fun-on-page of any writer I know–and I live with Carlos Hernandez! (Okay, I confess; it’s a toss-up).

Zig Zag, who’d already read A Sinister Quartet and given it an enthusiastic and incisive review, when asked if he might interview us for Black Gate, generously agreed! His questions were every bit as nuanced, as delicious, as sharp-edged, as playful, as hopeful as his own prose. And so, without any more ado…

ZIG ZAG CLAYBOURNE: When I finished the Advance Readers’ copy of A Sinister Quartet, my thoughts ran this way:

There’s a theme in this book, likely unintended, grown organically out of the times, of not giving up, regardless of fatigue, pain, unfairness or a sense that you are small and meaner forces are grotesquely big.

END_OF_DOCUMENT_TOKEN_TO_BE_REPLACED 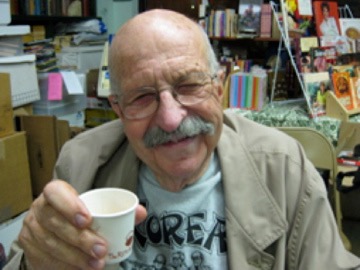 When John asked me to write an article for Black Gate about Gene Wolfe, I agreed immediately. I had written a blog about his passing, and a poem, and then a remembrance for the latest issue of Locus — the print magazine, not the online zine, although they have a wonderful remembrance of him here.

I wanted to keep writing about him, as if writing were an act of resurrection. I wanted to write everything.

But instead of getting easier, it’s been getting harder. I’ve been wracking my brains about this blog. So many amazing articles have been coming out about Gene, beautiful interviews and retrospectives. What more can I say? My memory is panicky, faulty. I don’t know what to add.

I’m not an expert on Gene’s work. I’ve read a good deal of it, but not everything. I knew him more as a mentor and a person than as a writer. I was looking forward to having my whole life to read his work.

But I’ve gathered up here, for you, some of my favorite articles about Gene by people who are much more critically familiar with his writing than I am.

END_OF_DOCUMENT_TOKEN_TO_BE_REPLACED 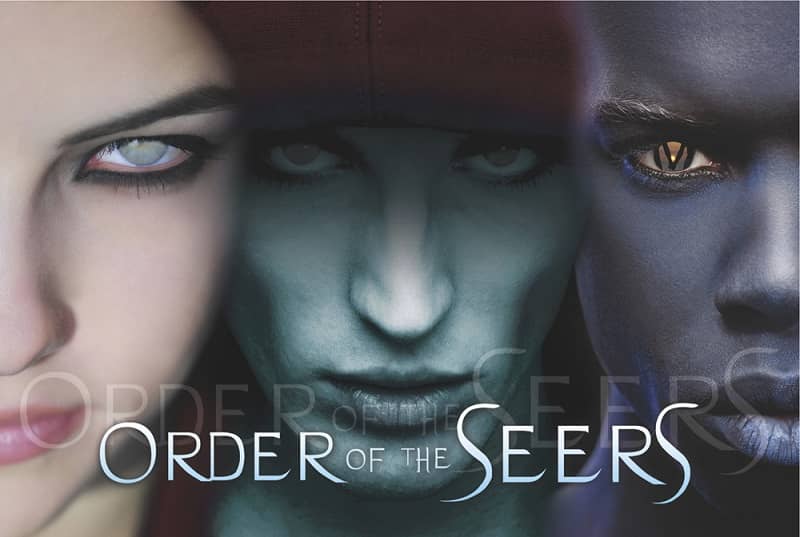 I met author Cerece Rennie Murphy at an East Coast science fiction and fantasy convention called Boskone a few years ago. She was sitting at table, selling books, and shouted out to me as I passed that I looked beautiful.

As soon as I turned and looked at her, I realized she was beautiful too — beaming out with right good will, all bright colors and a megawatt smile. She was friendly, and extremely interesting, and right there on the spot, my husband and I bought her book, The Order of the Seers, which I promptly went home to read.

Since then, Cerece and I have become friends — on social media, yes, but in real life too — penpals when our schedules permit, pizza-buddies when she’s in town. I am so pleased and excited to bring all you Black Gate readers this interview.

END_OF_DOCUMENT_TOKEN_TO_BE_REPLACED 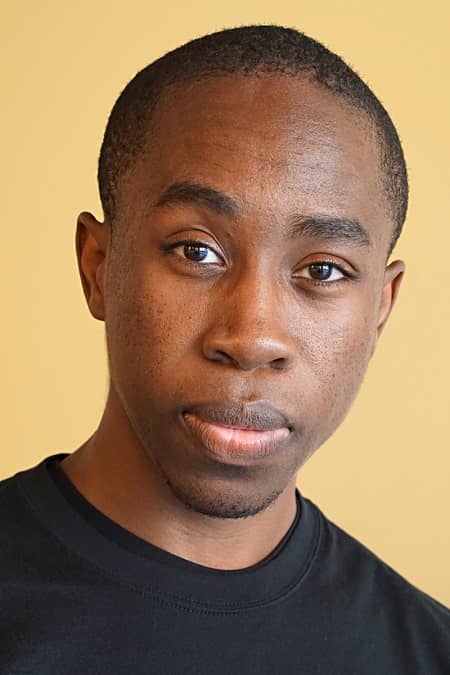 Greetings, Black Gaters! I’m here today with an interview for you with Rob Cameron, or “Cam” as I like to call him, a New York speculative fiction writer, among — as you will see — other things.

Cam was one of the first friends I made in New York City. Wait, let me take that back a few steps. It all started with Readercon, as so many things (including my marriage) do! It was probably Readercon, circa 2015. I was attending a panel to hear Ellen Kushner talk about something very interesting that I cannot now recall. I do recall that she opened the panel up to questions very early — which is one of her neat tricks: she’s there to serve the audience, and wants to talk about what interests them most. One of the first questions from the audience — and I remember thinking it was very keen and interesting — came from a bright-eyed young man who was sitting on the edge of his seat, leaning forward, as if he wanted to be the first to hear everything. He obviously knew Ellen, and she him, but I didn’t know him, and I thought, “Well! He must be a friend I haven’t met yet!” and determined at that moment to fulfill my own prophecy and get to know him better.

It turns out that this gentleman was none other than Rob Cameron, writer, gamer, teacher, as well as one of the main movers and shakers of the Brooklyn Speculative Fiction Writers and Kaleiodocast, the podcast they produce, which features fiction by and interviews with speculative fiction writers, and also stories that occur in a shared world.

The more I got to know him, the more I realized Cam was at the heart of New York’s electric, eclectic, thunderous spec fic scene, deeply involved in a community of writers all rising together, reading and critiquing each other’s work, attending events and conventions, and learning the business of being a writer. I thought he’d be a fantastic person to interview for Black Gate, so that we could all share in some of his knowledge, wisdom, and love of pie. After all — ’tis the season for pie. But then, when isn’t it?

END_OF_DOCUMENT_TOKEN_TO_BE_REPLACED 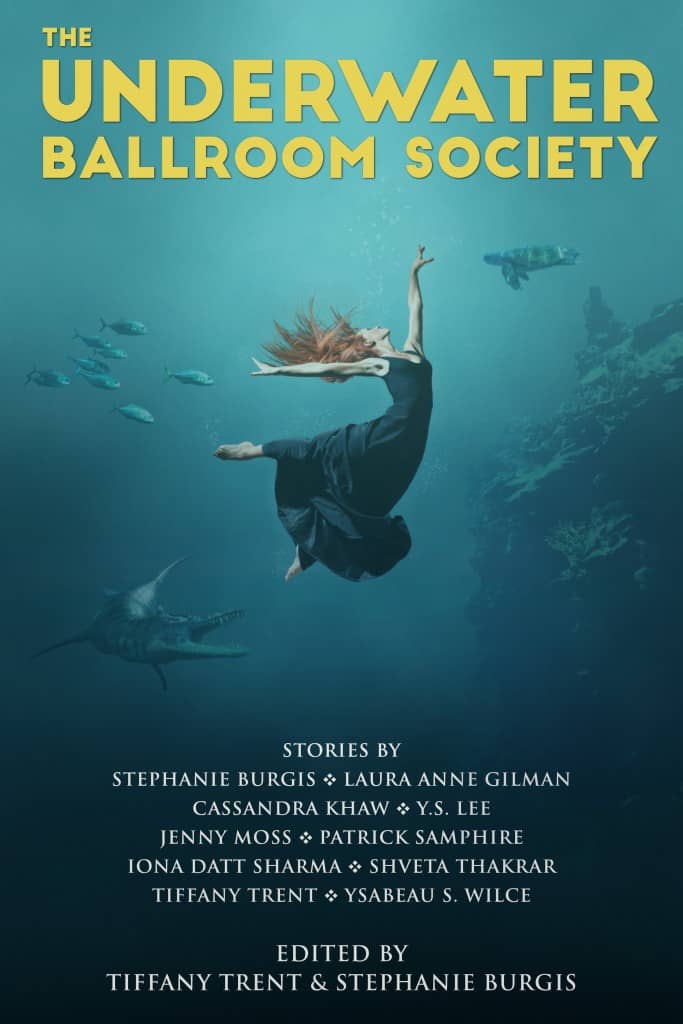 In The Underwater Ballroom Society, an anthology sprung what-if-ily from a Twitter discussion, Tiffany Trent and Stephanie Burgis have edited a book targeted most righteously to the naiads, nāgas, and merfolk among us. Eleven stories of splendiferous sub-lacunar spectacle await the invited… and we’re all invited! Put on your best fishing net dress, string yourself with drowned doubloons and deep-water pearls, and dive in!

END_OF_DOCUMENT_TOKEN_TO_BE_REPLACED

The Road to Neozon is the latest collection of short stories by author Anna Tambour (Smoke, Paper, Mirrors; Crandolin; Spotted Lily; Monterra’s Deliciosa and Other Tales), and the latest publication of Obsidian Sky books.

Author Paul Di Filipo once wrote that Tambour will “register Richter-powerful on the delighted synapses of all patrons of weird, funny fabulism.” Her new book, Road to Neozon, invites “those who lack caution” to “proceed,” and offers its pages “to those who conjure. To those who wander. To those with a hopeful eye for things unseen.”

Neozon showcases eleven “distinctly Tambourian (7 special to this collection), typically slippery tales to celebrate life’s wondrous unease, and its unerring ability to attract the attention of forces that grin at the notion of human control.”

END_OF_DOCUMENT_TOKEN_TO_BE_REPLACED 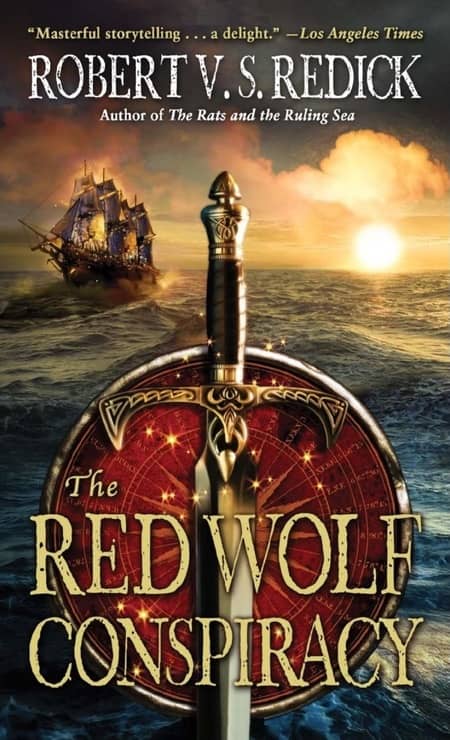 I think I stumbled on my first Robert V. S. Redick book in the Westerly Public Library. Oh, those Halcyon days where I wandered at whim through the SFF stacks, idly selecting titles and reading first pages. If they happened to catch my interest, well then! Together we went to the Self-Checkout, and thence for home — and blissful, blissful book-chomping time.

Is this how Red Wolf Conspiracy came to my hand? I seem to remember thinking, for whatever reason: “Probably not for me!”… and then, like two seconds later, it’s dawn of the third day, and my eyeballs are twitching, and I’ve just finished it.

At which point, knowing me, I probably friended him on Facebook.

END_OF_DOCUMENT_TOKEN_TO_BE_REPLACED 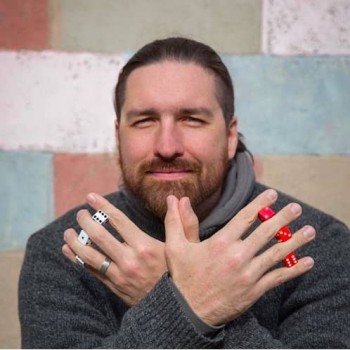 So, our friend Tim Rodriguez came by our home a few weeks back when we were hosting a game-night. We’d thrown the doors open to a bunch of game-lovers of our acquaintance for a night of food and play, and they flocked in with their favorite games (Wari, or Oware, being the game that got the most giggles) and some very fine (I was told) single malt whiskey. (Or maybe it was double-barreled? Something. I don’t know; I was too busy making lasagna.)

Anyway, Tim brought some new Backstory Cards to playtest. Most of us (including me) who volunteered to playtest with him hadn’t role-played in, well, ever. Or at least for years, the fog of memory obscuring most of the details.

. . . But since we were just testing the cards for story-potential and not playing an actual game, it seemed to work out well enough, and pretty soon we were all, like, a gaggle of giant fungal glow-in-the-dark monster crabs running around ravaged urban landscapes bringing down mobsters. You know. Like you do.

And sometime in all the chaos, Tim may have mentioned something about a new Kickstarter project.