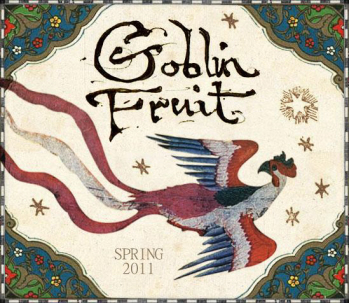 What? Another issue of Goblin Fruit is LIVE??? Aw, heck! Why didn’t you say so in the first place?

And you know what? It’s special.

And you know why? Because I’m in this one it’s Goblin Fruit’s FIFTH ANNIVERSARY!!!

They’re doing all sorts of cool things here. Wick and El-Mohtar have their usual, hilarious Note from the Editors, they have a PRIZE DRAWING, and their featured poet, Catherynne M. Valente has put up Act I of a four-act colossus, A Silver Splendour, a Flame, which she says will be, if she does it right, her “Cantos.”

Cat blogged about it yesterday:

This is a Persephone poem. It is a very long Persephone poem. It, in fact, will not complete for one year. The “acts” will come out on the solstices and equinoxes for the next year, as is appropriate for Our Girl. It is a sprawling thing, with much experimentation and madness. It is Persephone as a Vaudeville show. It is difficult and it is thorny and it is, I hope, beautiful. I hope you like it. I hope you’ll all read it, whatever you think about poetry, and Persephone, and girls scribbling verse. Give it a chance.

I started reading it yesterday, thinking just to peek — it is, after all, quite long — and then I fell in. Into a pool of my own slobber. I mean, I can’t even, AAAUUGGGHH!

But don’t take my word for it. I’ll just except this leeetle bit, for those of you who love the old gods:

And then there are all the other poems. Which are, as usual, rich and needling. Mine is neither, but it does rhyme “Lucifer” with “due to her,” so it can’t be ALL bad!

We last covered Goblin Fruit with the Winter 2011 issue.