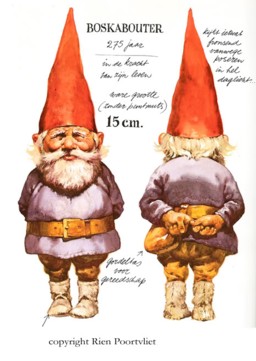 This morning on my walk to work, I spotted a man crossing a lawn. His arms were very full. Of garden gnomes.

You know, gnomes? With the blue coats and the red hats? The Rien Poortvliet kind?

“Morning,” he said. “I got a delivery. Gnome delivery.”

After we’d passed each other, and I’d spent a good while grinning, I thought to myself, “I know why that just happened. That happened because I started reading Welcome to Bordertown on the train today.”

(Hey! Heads up! If  you follow the above link to the Bordertown website, then click through the fancy links there to Amazon to purchase any of the new books on that page, then Terri Windling’s Endicott Studio gets a small kick-back from Amazon.com. And all of that money is donated to a shelter for homeless kids. More info here.)

Now, I’m only half a story in — the first one. But half a story in means I’ve already read the two introductions, by Terri Windling and Holly Black respectively, and also the “Bordertown Basics” which is sort of like a mix of the Not for Tourists Guide to Chicago, and Wolfe and Gaiman’s wicked little chapbook, A Walking Tour of the Shambles. It includes a weekly advisory about gang movement, monster sightings, pickpockets and missing gargoyles.

This bit made me chortle:

“The Mock Avenue street association would like to apologize to everyone for fixing the church tower clock last week, which caused widespread confusion. It has now been restored to its usual wrong time.”

But let me back up a little. Reading the introductions, I started to get a strange feeling. Gene Wolfe described a poem once as giving him “that fairy tale feeling.” He may have been quoting someone famous, like Dunsany or something. He does that. This was like that feeling, but it was also another feeling mixed in. I started remembering the Burton Barr Library in Phoenix. I remember the first time I stumbled on De Lint’s Jack the Giant Killer, realizing it was part of a series, and devouring all the books therein. That was way back. This would have been, what,  ’98? ’99? Somewhere in there. Late high school. 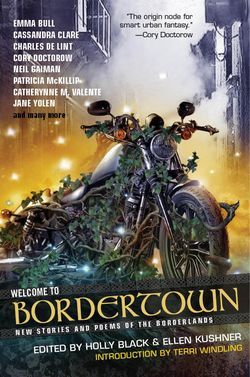 I came to my Fantasy vocabulary kind of late, I think. Until a few years ago, I hadn’t ever encountered the term “shared world,” what it entailed, or how a group of authors got together to write in one.

So when my friend Amal was asked to write a song — was it just last year? — for this new Welcome to Bordertown book, and started talking about how she’s loved these Bordertown books for just about forever, and how they totally shaped her childhood, I was happy for her, but I didn’t really dig what she was talking about.

But then, as I read the introductions to the book, I got that feeling. That fairy tale feeling, but also the itch of familiarity. Silver-haired elves. A city that was built on the borders between Faerie (or, as the locals of Faerie call it, The Realm) and the human world. A city for misfits, half-bloods and runaways.

Surely, I thought, I’ve been here before?

You must understand. Back in my high school days, I was reading two, sometimes three books a day. I read them when I was supposed to be doing homework, or babysitting. I read them when I ate, when I bathed, in the car, at family get-togethers. I devoured — very nearly mindlessly — books at a rate I now envy in my younger self. And I know I’ve been to Bordertown before.

But it’s like in Stephen King’s IT, when the grown-ups forget those mad adventures of their youth? I have forgotten most of what I ever knew of Borderland. Which is, I think, oddly appropriate.

And now I’m back again. In the first story, there are characters who, in the midst of getting lost in this strange, shifting city and trying to find themselves, also manage to have a discussion about Lloyd Alexander’s Chronicles of Prydain. Reading it on the train this morning, I’m afraid that I may have squeaked and jolted in my seat.

THEY ARE SPEAKING MY LANGUAGE!!! I thought, and I felt like a kid again, meeting another kid who also happened to like rolling up a ball of tinfoil into a sphere and pretending it was a golden bauble that lit up in the dark, just like the one Princess Eilonwy had. 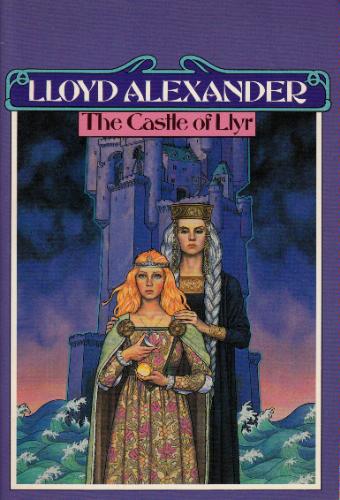 How awkward and yet, at the same time, vastly comforting, to open the pages and find yourself reading about a girl who was not unlike you might have been at that age.

Now that I have the distance of some years on that girl, how geeky and endearing and semi-desperate she seems to be, with her longings for velvet dresses and for friends. I want to pat her on the head and tell her she’ll find her way out of Bordertown. Or maybe find her place in it. After all, she found her Gurgi!!!

That’s all I’m going to tell you, because that’s as far as I’ve gotten in the story.

Oh! Wait! And, for you myth-lovers out there, there’s a great exchange about the Mabinogion and Mahabharata. And, also? The way Kushner and Windling write about music makes you want to get up and dance to drums that are not there. And I have a crush on the boy with the toolkit, and I like the dog whose real name is Steadfast. And I want to take Cam out for tea. So there.

Basically, what I’m saying is, I’ll probably be blogging about Welcome to Bordertown throughout my whole reading of it. I’ll try not to give too much stuff away. Only enough to whet your appetite for the book itself, and all the books that came before it.

You can pre-order it on Amazon. Don’t forget to check out the BORDERTOWN WEBSITE! Why? ‘Cause it’s cool. And also ’cause 3 out-of-print stories appear there!

There are some great stories in there, but Windling/Kushner story might be my favorite of the book. It’s easily one of the most fun things I’ve read in the last year.

Ooh! Did you write about it too somewhere? I finished the first story over my lunch break and now I want the SECOND one! And the THIRD!

Alas, they call it “work” for a reason.

No, not yet. I am planning to talk quite a bit about it on upcoming PodCastle thingy, though 🙂

Excellent. ALERT ME to the hour!

Funny you should bring up Lloyd Alexander. One of my students is nearly to the end of The High King. At the beginning of the series, getting him to read three chapters a week was like pulling teeth. Now, I can barely keep up with him as he sprints to the end. He hated reading, oh, a year and a half ago. There’s nothing like the right book at the right time.

Eilonwy, of course, would tell him, “I’m not speaking to you!” and then go on for a paragraph or two about why she’s giving him the silent treatment. And then, reader, she would marry him. That’s not the aspect of her character that stood out for me most when I was young, but after seventeen years of marriage, I have to hand it to Alexander–he knew how to make it clear from the first that she and Taran were fated to marry.

My older brother got Prydain as a gift and then he never read them. I stole them from him, and I have that same set yet, taped up when it fell apart, with home-made covers for when the covers fell off. The High King disintegrated, but I found another of the same set at a used bookstore. Maybe even the one I work in.

It is a matter of the right book at the right time.

The thing I liked best about Eilonwy was her bauble. And how she was the one who first found and carried the black sword Dyrnwyn. And I liked her hair. And the way she hated to wash it. And when she exclaimed, “Oh, comfortable roots and berries! Such a nice change from goosefeather quilts!” Or whatever the line was.

The princess and the pig-keeper. I think it was alliteration that fated them. 🙂

Hm…thanks for the site, now if only they were already out in ebook format…^.^V

[…] I’m a reasonable creature. Last time it was gnomes. This time, the Internet crashes. I can deal. It’s all coincidence, right? […]

[…] up this, for lack of a better word, “review,” the first two parts of which can be read here and here, for those of you whose patience stretches even unto […]

[…] I told you how long it takes me to read an anthology? Any anthology? I think I did, way back in my Welcome to Bordertown blogging days. But don’t worry if you never read those three monster blogs […]