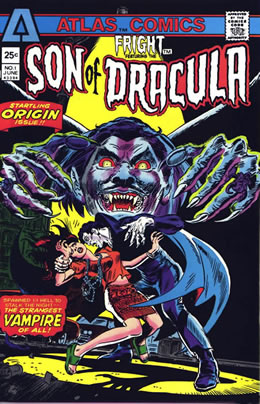 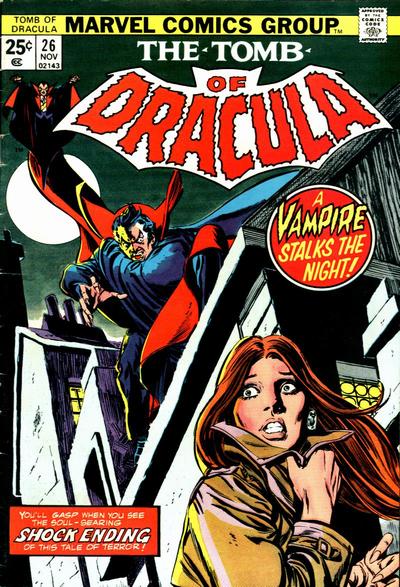 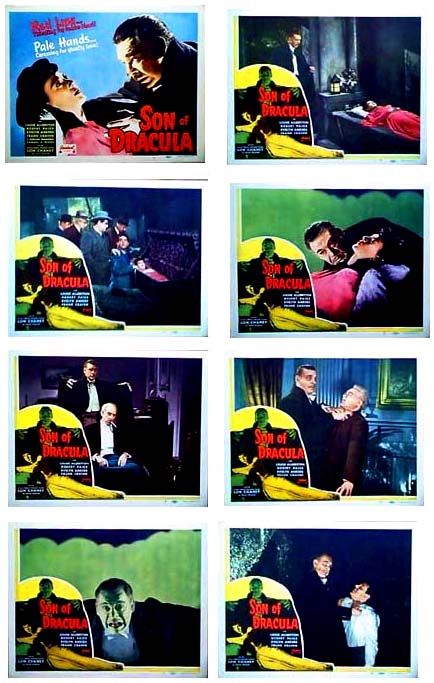 Gary Friedrich (who scripted the first couple issues of Marvel’s Tomb of Dracula as well as issues of Marvel’s more adult black and white companion magazine, Dracula Lives!) introduced the world to Atlas’ blood-sucking anti-hero with Frank Thorne (another Marvel veteran) illustrating the book. David Anthony Kraft (yet another Marvel veteran who had penned Dracula scripts for Marvel’s quarterly Giant-Size Dracula spin-off) had helped Friedrich develop the material along with the aid of Larry Lieber (one of Marvel’s unsung heroes whose reputation was eclipsed by his more famous brother, Stan Lee).

The cover of Fright #1 promises the origin of “the strangest vampire of all” and despite a very Gene Colan-influenced rendition of Dracula himself, we get our first look at Atlas’ Son of Dracula and immediately begin to suspect that Marvel’s reluctant vampire, Morbius (introduced in the pages of The Amazing Spider-Man) was as vital a source of inspiration for the book as Marvel’s own Dracula series.

The story gets underway with Transylvanian villagers burning at the stake an innocent woman accused of being a witch. Dracula (looking very much like Marvel’s version of the character) turns up at the scene and rescues the girl and takes her back to his castle. He is about to attack her when he spies a birthmark on her breast and realizes the girl must be his fourth cousin and the only daughter born of the House of Dracula. While puzzling exactly how that works, we quickly move to a parody of the famous Stoker scene at the dinner table. Here Dracula is barely able to keep his hands off his cousin who seems oblivious to the fact that a girl with her measurements probably shouldn’t go around in revealing outfits.

The unnamed cousin realizes who and what her host is and Dracula literally chases her around his castle like some dastardly silent film villain determined to rob the heroine of her virtue. The two soon make a bargain and the young woman agrees to bear Dracula a son (not quite sure how she is positive of the sex of their putative child) in exchange for his not attacking her. The very next panel, the deed is done and Thorne gets some laughs displaying the pleasantly exhausted young woman clinging to the bedpost while Dracula finishes dressing saying he must go out in the night and slake his thirst. The nameless cousin immediately nags him to take care as her son will need a father. Amazing how the nagging seems to go hand in hand with what passes for commitment in this unorthodox relationship.

Nine months later, the nameless woman bears Dracula a nameless son (one gets the impression the book was thrown together quickly) and immediately turns on her benefactor informing him that she intends to raise the child on her own and if Dracula refuses to agree she will smother the infant in his blanket that very second. At that point I was beginning to suspect the villagers might have been doing the right thing in burning her at the stake. Dracula isn’t one to tolerate insolence so he immediately bites her on the neck. The next morning while Dracula sleeps in his coffin, his cousin skips out with their son and gives him to an old gypsy woman to raise (in a direct steal of the origin of Dracula’s daughter from Marvel’s series) with the added twist that she pays the woman to emigrate to America and raise the boy there. We next see her on the docks at night waving goodbye to the boat when Dracula turns up. She runs from him and finds a broken post on the dock that makes a convenient stake and jumps on top of it to save herself from being made into a vampire. Dracula is pretty ticked off about this but is determined to track down his missing son.

Apparently the boy’s mother didn’t give the gypsy woman too much money because they settle in an Appalachian mining town. It takes Dracula seven years to track them down to their rustic cottage. The old woman holds the vampire off with a cross and takes the boy and flees to the mine. She locks the boy in the cellar with a cross and a book about vampires so that he will understand about his father and then blows herself up with dynamite to save herself from Dracula’s vengeance. 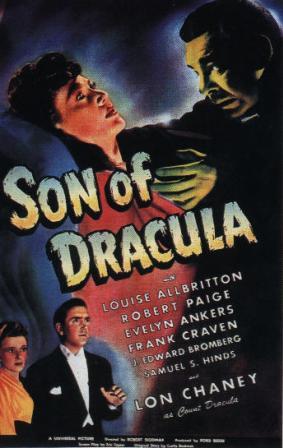 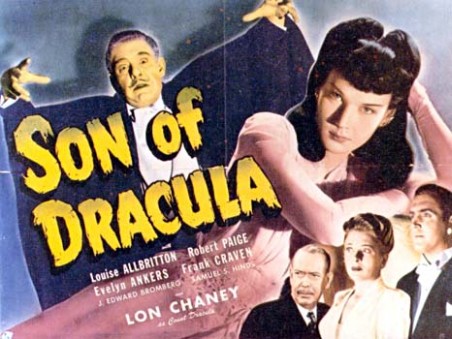 Flash forward to the year 1975 and the boy is now college professor Adam Lucard (a nice nod to 1943’s Son of Dracula where Lon Chaney, Jr. cleverly disguised his identity with that impenetrable alias) teaching a class on (what else?) the occult at Columbia University. Adam has caught the eye of attractive blonde (and amateur occultist) Debbie Porter who decides she wants to improve her chances of getting an “A” in his class. Adam’s apartment is a virtual occult museum, but (like Morbius) he controls his bloodlust by sleeping with a cross on his chest. Of course, lust is always one’s undoing and Debbie breaks into his apartment and decides to jump on top of her sleeping professor. The trouble is when she removes the cross from his chest all those years of pent-up bloodlust drive Adam wild and he drains the poor girl dry with one suck (not exactly subtle, is it?).

Adam makes his first transformation into a bat and flies out the window where he happens upon another classmate on the street corner outside his apartment. The girl appears to be working as a prostitute but Friedrich’s dialogue tells us she is waiting for Debbie so they can break into another apartment. Having established both girls as non-sympathetic victims she can quickly fall prey to Adam’s savage attack without the reader feeling too bad.

The ending is interesting as the police arrive on the murder scene and believe there is a vampire loose in New York, but decide to hush things up to prevent a public panic. Meanwhile Adam awakens the next morning to discover Debbie’s corpse on the floor beside his bed. He quickly dispatches her with a stake to prevent her rising from the dead as a vampire. Atlas’ Son of Dracula plays fast and loose with vampire mythology not only in having a cross preventing Adam from becoming a vampire for years, but also in his not needing to sleep in a coffin after his transformation. The last panel shows him holding the cross reverently and swearing he will never become a vampire again. Obviously had the series continued to a second issue, Adam would have broken that vow. It is likely his father would have turned up and the police protagonists would doubtless have called in a vampire expert to help the investigation. Finally, Debbie’s unnamed friend would surely rise from the grave and give the series a vampire femme fatale, but it was not to be. Atlas faltered shortly after publication and the promised second issue of this title never saw print leaving Fright featuring The Son of Dracula as a curio for comic collectors ever since.

Interesting; this wasn’t one of the Atlas titles I remember.

I did have the (very few) issues of “Wulf the Barbarian”, the first two of which were rather promising (by Larry Hama and Klaus Janson), but it then all went wrong with the remaining two issues (though there were some interesting steampunky-ahead-of-its-time elements introduced).

Weirdly, there’s a revival of Atlas titles on the way, including Wulf… but a Wulf transported, for no clear reason, to the present day.

Not sure of “Son of Dracula” is also due for a reboot.

Later, a Japanese game company would take this concept and in the interest of re-hashing their franchise turn it into one of the coolest games ever.