…And I as rich in having such a jewel
As twenty seas, if all their sand were pearl,
The water nectar, and the rocks pure gold.

Now, I’m not saying that you all have to leap up and go right now to Ashley Full Stop Brown’s new Etsy site, Woodvine, but, you know, if there’s an anniversary or birthday or milestone to be celebrated (either your own or another’s), and you’re a fantastical sort of person (would you be reading this if you WEREN’T???), and you want a gift that is by its nature gorgeously handcrafted, thoughtful, and full of literary significance, travel no further than your browser! 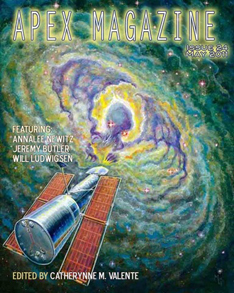 If I recall aright (I should never write memoir, never), Ashley was wrapping keys in wire and jewels, which were later raffled off as pendants. And we all drooled for those jeweled keys. Oh, didn’t we just? (I did NOT win one, by the way. Alas.) We were having a little open mic that night, right after S.J. Tucker and the Traveling Fates gave us a faboosh concert. (Isn’t the word FABOOSH excellent? I have recently adopted it into my jargon.)

…You remember S.J. Tucker, don’t you? I did this whole long interview thingy with her, back in the Olden Days, before I was Black Gate’s FELL AND REVERED Blog Editrix.

I don’t precisely remember how I asked Ashley if she’d give me an interview for Black Gate Magazine. If people do cool things that have a fantasy bent, I immediately POUNCE! For your benefit, of course, DEAR READERS! Ahem. And ’cause I’m awful curious about PROCESS, you see.

It was at that party-cum-open mic I heard Elizabeth McClellan read her poem, “The Walking Man Goes Looking for the Sons of John: Six Cantos,” this amazing bluesy ghost poem in full Southern twang, recently published in Apex Magazine, Issue 24. Later, in the flurry of emails between Ashley and me, I learned that Ashley had created several pieces in honor of this poem.

It’s as if she takes the goosebumps we all get when reading or listening to something really extraordinary, and then transforms them into wearable art.

So. Without further ado, I give you…

What are your favorite fantasy novels or stories?

Oh, gosh, this is such a hard question! There’s so much excellent fantasy out there. Right now I’m absolutely loving Seanan McGuire’s October Daye series. Seanan is a person of many talents, and this series may be her best. There’s nothing better, in my mind, than a well-built world full of interesting characters who get into interesting trouble. Also, faeries. I could not be more excited about the upcoming release of One Salt Sea.

Another series I’m enjoying is N. K. Jemisin’s Inheritance Trilogy. I’ve read both The Hundred Thousand Kingdoms and The Broken Kingdoms about five times. It’s another example of great worldbuilding and unusual characters. Intrigue and magic and Gods, oh my. The Kingdom of Gods comes out in October and believe me when I say I’ll be pre-ordering it.

How does the fantasy genre inspire your art?

Fantasy, for me, is the idea that anything can happen. The normal rules do not apply; please fasten your seat belts and enjoy the ride. When I sit down to work, I love to watch movies and television shows with a science fiction and/or fantasy aesthetic. That helps me create unusual pieces that inspire comment and test the boundaries of what jewelry is, in the same way that great fantasy tests the boundaries of the real. It always fills me with glee when someone does a double-take at one of my pieces and wants to look more closely at the work.

If you could make jewelry for any one character in any piece of fiction, who would it be and why?

You’re killing me with these difficult questions! I have about five answers for this, and some of those pieces are forthcoming. If I absolutely have to pick only one, I will say that I love the Marquess from Catherynne Valente’s The Girl Who Circumnavigated Fairyland in a Ship of Her Own Making. The world Cat creates in Fairyland is spectacular, and the Marquess is so deliciously evil. I think her jewelry would change, just as her hair does, and I would really like to have the power to make morphing sparklies that are also probably lethal.

What piece are you proudest of and why?

My favorite piece I’ve ever made is called Wicked Little Weavers. The title comes from Bekah Kelso’s song, “Spiders,” which is on her new EP Departures. Bekah gave me permission to use her lyrics to name some pieces, and this strange little pendant just sort of appeared organically in my hands one night out of scraps of other material on my table. The pieces from her album are being released, one per day, over at the Woodvine Design Etsy site. We’re calling the project Departures Bling: Folk–hop Wraps, which is a part of my collection, “Wrap is Poetry.”

Right now I draw a lot of inspiration from other incredible wire artists, notably Kythryne Aisling of Wyrding Studios, who blows me out of the water with her amazing talent. Of all my currently available pieces, Wicked Little Weavers is the closest to my overall design aesthetic.

I believe you’ve based jewelry off of songs and stories. Has anyone based a song or story on your jewelry? If you could pick one writer or musician to do so, who would it be, and which piece of jewelry would you select for them?

I do love to make jewelry inspired by my favorite poetry, songs, and stories. Right now you can find jewelry that comes from the lyrics and lines of SJ Tucker, Elizabeth McClellan, Amal El–Mohtar and more on my Etsy. The collection, “Wrap is Poetry,” comes from the desire I have to honor the extraordinary narratives that these women are creating.

No one has yet based a song or story on a piece I’ve made, but that would be such an honor! I’d love to see a story in which one of my pieces was a central plot device. And if I can pick anyone, then it’d have to be Dorothy Parker. No matter that she’s dead. I’d love to see one of her hilariously witty poems dedicated to Wicked Little Weavers, for example.

Ashley Full Stop Brown hates it when people run her names together. She creates jewelry for Woodvine Design and edits all the things at Edits, Full Stop. When she is not wrapping objects in wire, polishing documents until they shine, or wrangling her adorable nine-month-old, she is likely to be found with a book and a glass of wine on her porch in Memphis, Tennessee.

Wonderful interview! And such gorgeous pieces. I’m honoured to have my words among them.

And such LOVELY words they are too!