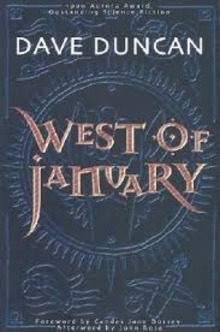 A few weeks ago I was talking about Dave Duncan’s series The Great Game, and that led me to reread his brilliant 2002 novel West of January.

West of January is science fiction that doesn’t, at first, seem to have any science in it. The story is an odyssey, narrated in first person by the main character, Knobil , who tells the tale of his life, from his childhood as part of a herdmaster’s family on the great plains, through to his days as an old man, teaching the young.

Knobil is expelled from his family at puberty and vows revenge on the intruder who murdered his father and mother. While he never completely loses sight of this objective, circumstances take him on a journey through most of the other societies on the world of Vernier, from the Sea People, the Miners, the Traders, and even the Angels in Heaven. It becomes apparent that this world is not Earth, and that while it is suitable for human habitation, its rotation and relationship with its sun causes a cyclical and catastrophic climate change which necessitates the virtual rebuilding of civilization each time.

West of January is a testament to just how important point of view can be. As in the best fiction of any kind, Knobil doesn’t explain anything to the reader that he takes for granted himself – though he might explain things that he knows to his young listeners:

The angels define the world by strips – twelves strips running north and south, seven east and west. The names of these are very old, given by the firstfolk. It is a sensible arrangement with only nineteen words to be learned. Any place can be located by reference to this grid. The west of January is but one example. Geographical features can be named also, like the March Ocean or the Wednesday Desert. This is much easier than remembering an endless arbitrary list, and much more practical when a forest may soon become a desert, or a desert ocean. 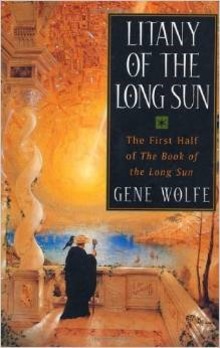 This passage occurs close to the opening, and very succinctly lets the readers know the minimum necessary to be able to continue reading without complete confusion. We know, for example, that this is a planet colonized by humans from our world – though it’s not apparent immediately that Knobil is a descendant of those humans. It also warns us that a great many of our familiar nouns are being repurposed – angels aren’t angels, nor are hippos, spinsters, silkworms, nor even months and years what they are in our world – and prepares us for invented words like snortoises.

As in Gene Wolf’s classic series The Book of the Long Sun, the readers are left to deduce most of the planet’s features, and even its history, for themselves. That planet’s rotation is never explained, for example, but we figure it out from what happens to the climate and natural features as time passes. We also figure out something about the biology of the planet from observations that the native species never sleep, are continuously eating, and have a third eye in the back of their heads.

Knobil isn’t an unreliable narrator, but the readers do get a sense that they know him better than he knows himself. He believes that he’s motivated primarily by revenge, for example, and he’s certain that he’s one of the world’s biggest cowards. It’s up to the reader to recognize that there’s a difference between pragmatism and cowardice.

The only criticism that I might have for West of January is Duncan’s representation of women. There aren’t many female characters and those actually given roles are either dumb baby machines or crafty villains. There doesn’t seem to be any other role for them. In such a well-crafted book – published in 2002 – that’s a bit disappointing.

Violette Malan is the author of the Dhulyn and Parno series of sword and sorcery adventures, as well as the Mirror Lands series of primary world fantasies. As VM Escalada, she is writing the upcoming Halls of Law series. Visit her website:www.violettemalan.com.

I’ve met Dave a few times at conventions and read a fair bit of his work. West of January was a favorite, but as an artist I really hated the DelRey ‘orca ride’ cover. So I did my own.I gave Dave a print of the artwork and got a lovely letter back. This version shows me goofing around with text and the DelRey logo. https://www.facebook.com/QUICKCOVERSart/photos/pcb.504860819651810/504860172985208/?type=1&theater

I’ve met Dave several times as well, but then, as Canadians our paths likely cross a little more often. WofJ is also one of my favourites. Do you think the cover was an attempt to make the book seem more mainstream, or “non-genre”? I’ve been seeing a lot of that lately.