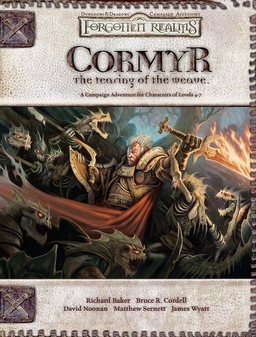 I’m still digging into the fabulous Forgotten Realms products I won at the Spring Games Plus Auction, all of which were brand new and criminally cheap – probably because they were written for D&D version 3.5 and are now a little out of date. Not that that bothers me; I mostly play version 1.0 anyway.

I’ve been very impressed with what I’ve sampled so far, including Lost Empires of Faerûn and Underdark, both of which were top-notch. They proved easily adaptable to my current campaign, and Underdark in particular is a truly superb resource. I wish I’d had it years ago. My subterranean adventures would have been vastly richer and more imaginative.

I’d heard some complaints about the Cormyr: The Tearing of the Weave before I ever cracked the cover. Third Edition D&D players were anxious to see the first Third Edition Cormyr supplement and eagerly snapped it up when it was published in March 2007.

But Cormyr: The Tearing of the Weave isn’t a setting book and includes only superficial information on the vast realm itself — something very disappointing to many Cormyr fans. Instead it offers — in my opinion, at least — something much more interesting: a 160-page mega-adventure detailing a vast and sinister conspiracy deep in the Realms.

It can be used independently or as the first installment in the most ambitious adventure ever published for Third Edition: a 3-part supermodule that continues in Shadowdale: The Scouring Of The Land (July 2007) and Anauroch: The Empire of Shade (November 2007).

Setting books are nice and all, but I play D&D for the adventures. And — when done right — Dungeons and Dragons shines brightest in its classic mega-adventures.

Players of the adventure contained in Cormyr: The Tearing of the Weave will discover that all is not what it appears to be at the construction site for a new temple to Mystra in Wheloon, To crack the mystery, they will journey to an abandoned keep in the Vast Swamp, follow the clues they find there to the Plane of Shadow, and eventually battle their way through swamps, towers, and dark ravines to confront a great black dragon in the service of Shar.

Delve into Darkness, Bring the Truth to Light

Cormyr: The Tearing of the WeaveBeyond the pristine façade of the Temple of Mystra, a sinister conspiracy threatens the future of Cormyr. Profane acts within the temple hearken to a mounting threat in the Vast Swamp. Heroes must cross into the Plane of Shadow to unlock the truth about this growing darkness in time to thwart an attack against Cormyr and the goddess of magic herself.

This Forgotten Realms campaign adventure is designed for characters of levels 4-7. It can be played as a stand-alone adventure or as the first adventure in a three-part series. Each encounter contains special tactical information for the Dungeon Master and expanded map features for ease of play. 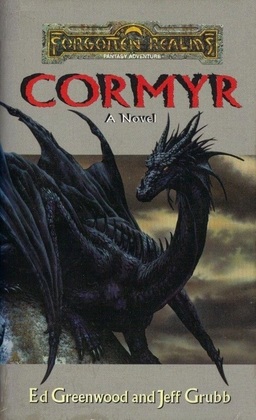 Overall, I was quite pleased with Cormyr: The Tearing of the Weave, which seems nicely structured. Although it was my first encounter with an odd new paradigm in adventure design from Wizards of the Coast: every encounter is described in a double-page spread, with a small map in the bottom right and the complete encounter key crammed into exactly two pages.

Sure, it was convenient to have every single encounter laid out so that I didn’t have to flip pages back and forth. But not every encounter needed two full pages and some could have used a lot more. But it didn’t matter — every single one, from the introductory assassin ambush on a cobbled street outside the temple to the climatic Ritual Chamber, lair of Despayr the Black Dragon, fits precisely on two pages. It’s a little maddening, wondering how much the designers had to pad out or cut each encounter to shoehorn them all into the exact same length.

Also, the book seems a little light on artwork this time, especially compared to Underdark.

Still, I was quite taken with the finished product and I’m very much looking forward to following the adventure thread into Shadowdale.

Cormyr: The Tearing of the Weave was written by Richard Baker, Bruce R. Cordell, David Noonan, Matthew Sernett, and James Wyatt. It was published in March 2007 by Wizards of the Coast.  It is 160 pages in full color, originally priced at $29.95 in hardcover. It is currently out of print. I bought a new copy at auction for seven dollars.

I don’t think any module is versatile enough to be able to anticipate what the party is going to do.

But i love them for inspiration and ideas. This book is no different. $7 is a steal. 3.5 Forgotten realms is my favorite era for the setting and if i’m RPGing in the Realms the timeline stops there.

Yeah, $7 was a fabulous price – I got lucky. And I completely agree that the best of them are a marvelous source of inspiration.

I’m not familiar with the 4.0 Forgotten Realms. What makes 3.5 your favorite era?

[…] month I took a look at the the first Third Edition Cormyr supplement, Cormyr: The Tearing of the Weave, released in March 2007. It was a 160-page mega-adventure detailing a vast and sinister conspiracy […]

[…] in April I wrote a brief article on the Third Edition D&D supplement Cormyr: The Tearing of the Weave, which I purchased for $7 at the Spring Games Plus Auction. While I was delighted with it, I […]