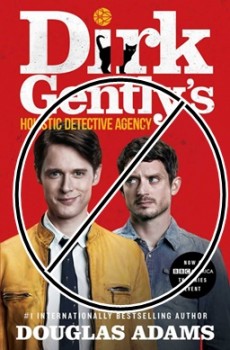 I love Dirk Gently’s Holistic Detective Agency, the novel by Douglas Adams. Which you know because you read my Black Gate post about it. And I liked the sequel, The Long Dark Tea Time of the Soul. And there were some good bits in the third novel, unfinished at Adams’ death.

And, I thought that the BBC miniseries starring Houdini & Doyle’s Stephen Magnon was worth watching. I own audio books of Adams reading Dirk Gently and the excellent BBC radio play of it. So, I’m a fan. I was leery after seeing the trailer for the new BBC miniseries starring Elijah Wood (not as Gently, however). It didn’t look like it was very true to the style of Adams’ books.

I’ve watched the first two episodes. Except for discussing BBC’s Sherlock post-season two, I’m usually pretty positive with my Black Gate posts here. If you are looking for more of that sunshine, skip the following and scroll on down to my review of the new show, Timeless.

With six of eight episodes yet to air, the new Dirk Gently is a festering pile of tripe. It bears almost no resemblance to Adams’ character, and even disregarding that, it’s a ridiculous mess of a show in its own right. Max Landis, who it appears wanted to imitate Quentin Tarentino while showing everyone how talented he is, all but completely ignores Adams’ work.

There is barely a shadow of the actual Dirk Gently in this series. Samuel Barnett’s character is totally clueless, almost completely helpless and neither clever nor funny. He just rolls along with no real insights or ability to influence events. That sound like Adams’ character? And, he’s not even the star, as the show is really about Gently’s reluctant assistant, Todd, played by Wood.

The opening scene, with dismembered bodies in a bloody hotel room – apparent victims of a shark attack (yes, you read that right) – immediately sets the tone. And it’s not a good one. There’s some life-essence stealing weirdo seventies British punk rockers in a van. Some seemingly alien clones who are hard to injure. A missing rich young girl who thinks she’s a dog. Todd’s delusional sister who likes to play the drums. A holistic assassin who also seems to be some kind of otherworldly being. A dog. A cat. Clueless federal police and a pair of always one (or more) step behind local cops. Richard Schiff (Toby Ziegler in West Wing) deserves better. Maybe Allison Janney can get him a stint on Moms.

Ostensibly, the story revolves around Gently trying to find the missing girl, whose father was one of those torn apart by the shark in the hotel (I can’t believe I had to type that). Gently has no client. Sadly, he doesn’t have Miss Pearce, the constantly unpaid secretary who is a highlight of the first novel, the BBC radio play and the first BBC miniseries. Also, DI Gilks (played superbly by Downton Abbey’s Mr. Carson – Jim Carter in the radio play) is also absent.

So, basically, Landis takes all the elements of Gently, plus every character and all of Adam’s cleverness from the novels, and throws them aside.

Again – this series has literally nothing to do with Dirk Gently beyond the name. Frankly, I’m tired of typing so much negative stuff. And there’s nothing good for me to turn to. Max Landis NEVER should have been given the keys to the Gently vehicle. And it turned out to be useless anyways, because what he created didn’t need the Gently name at all. Ten minutes into episode three, it occurred to me that this show is what something like Fargo would be if it was terrible (Fargo was absorbing). And I turned off the television.

If you are thinking of watching this show, I’m going to give you a couple of alternative suggestions to do first:
1 – Read Dirk Gently’s Holistic Detective Agency
2 – Then read The Long Dark Teatime of the Soul
3 – Listen to an audiobook or radio play of Dirk Gently’s Holistic Detective Agency
4 – Read The Salmon of Doubt (the completed after-Adams’-death third novel)
5 – Watch the Stephen Magnon Dirk Gently miniseries
6 – Gouge both your eyes out.

After that last step, you won’t have to worry about watching the new miniseries. Trust me – better to play it safe.

Moving on to something I wasn’t horribly disappointed in, let’s look at Timeless. The new time travel show airs Mondays on NBC.

TIMELESS
Now, for something a bit more positive. Timeless is a show about…stay with me, now…time travel. It airs on NBC on Monday nights and as I type this, I’ve seen four of the first five episodes. Garcia Flynn (Goran Visnjic of ER) broke into a super secret lab with a couple of gunmen, kidnapped Anthony Bruhl (Matt Frewer: four Sherlock Holmes movies and Max Headroom) and made his escape in a time machine. Flynn is ex-NSA and had disappeared after killing his wife and child, so he’s got the cloak of mystery wrapped around himself. 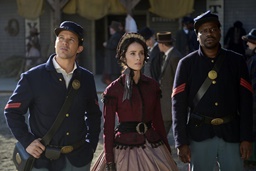 Seems that the uber-rich Connor Mason had created a time machine without letting the government know. They’re a bit pissed when they find out. Fortunately, he’s got a spare: the prototype, which is fully functional. How convenient. But if you’re willing to buy time travel, I don’t think suspension of disbelief should be an issue in this show.

So, an emergency time travel team is assembled (this sounds bad as I type this, but it’s better than that). Lucy Preston (Abigail Spencer) is the pretty historian and Wyatt Logan (Matt Lanter) is the super solider. Rufus Carlin (Malcolm Barrett) is the shy scientist added to the team. He’s African-American, which adds an interesting element to the social situations they find themselves in. He’s spying for Mason, though.

So, in the pilot, the heroes head back to the day of the Hindenburg disaster, in pursuit of Flynn. Then it’s Las Vegas during atomic testing time. The next week, it’s Lincoln’s assassination. The next, they run into a pre-James Bond Ian Fleming, spying on the Nazis. The most recent episode sends the team to the Alamo.

As usual, they are to try and not change events, as what they do back then will rewrite history. In fact, something happens in the first jaunt so that when they come back, Lucy’s sister never existed. Her mission becomes to get that ‘fixed.’ Wyatt feels responsible for his wife’s death and that’s hanging over him as he moves back in time.

I don’t want to load this post up with spoilers, though it’s tough to talk about the show without doing so. I’ll just say that Flynn may be up to something to prevent bad stuff from happening, so it’s not clear he’s definitely a villain. And the heroes are faced with tough choices every week. Lucy has written a book about Lincoln. And Rufus talks about how much more difficult the black man’s plight became when Lincoln was assassinated. So, it’s hard not to save him.

The in-jokes can sometimes be too much. In the pilot, Lucy introduces herself as Nurse Jackie from General Hospital. That kind of stuff. Fortunately, they didn’t go too crazy. And the Bond jokes in the Ian Fleming episode were pretty good. Rufus does observe that going backwards in time, pretty much no matter when they go, it’s bad to be of his race. That’s an astute point.

The uncertainty regarding Flynn’s intentions are going to be the key to this series. History will apparently be changed to varying degrees, depending upon what the hero team does in the past (they actually rewrote the history of James Bond films!). But whether or not they stop Flynn – whether or not they choose to stop him if given the opportunity – looks to be the dramatic lynchpin.

This isn’t a “must see” new series, but it’s been good enough to stick with so far. With all of history to choose from, there’s no shortage of interesting scenarios each week. But they’ll have to be tied together by Flynn’s central need. Obviously, I think it’s a whole lot better than Dirk Gently.

NBC seems to be pleased, as they’ve just added three more episodes to the initial thirteen that make up the first season. Ratings have been good compared to other new shows this season and okay overall. So, we’ll see how the plot evolves and if viewers are invested enough to keep tuning in. I think it’s kind of fun, so that’s been enough for me so far.

So, one show worth watching and one show to avoid like the plague.

Dirk Gently – I watched the third episode and it was the worst yet. Five minutes into Episode 4, an FBI agent, shot by the alien-like clone beings, was turned into a mouse, while one of the clones became his doppleganger. The mouse was then, apparently, eaten by a girl… who thinks she’s a dog. I deleted the episode from the DVR and cancelled future recordings. I’m out.

Timeless – The conspiracy that underlies everything came out a bit more in the Watergate episode (it relates to the eighteen and-a-half minute gap. This show has added depth as it has gone on and I like it a bit more each week. Definitely in for the rest of the season.

Dirk Gently – I gave up on this craptacular show early in episode four. Naturally, it was renewed.

Timeless – And word just came out that it’s been cancelled.

The status of these two shows is an indicator of what’s wrong with television.

Within a week of its cancellation, Timeless was ‘uncancelled.’

The second season kicked off on March 11th.

I wish I could be angry at the hijacking of the Gently vehicle but actually I am just disappointed. Thanks for the heads up. There are so many shows to watch and books to read I can do without wasting my time on this one.

Watched episode 3. I don’t see much point in going on with this dreck. It will continue to have nothing to do with Douglas Adams’ character. And as some kind of Quentin Tarintino/Fargo wannabe, it’s simply not any good.

Only reason to have the ‘Dirk Gently’ name is to cash in on Adams’ books. No bearing in any other way.

And…five minutes into Episode 4, an FBI agent, shot by the alien-like clone beings, was turned into a mouse, while one of the clones became his doppleganger. The mouse was then, apparently, eaten by a girl who thinks she’s a dog.

This is just about the dumbest show I’ve ever seen. So, I deleted the episode from the DVR and cancelled future recordings.

What an abysmal take on Douglas Adams.

Proving civilization remains in steady decline, this travesty of a show got picked up for a second season.

I would watch 100 straight hours of The Shannara Chronicles before I tried one more episode of this steaming pile.