Last week, I was writing my post for today. It was about the Houdini and Doyle miniseries, in which Stephen Mangan plays Arthur Conan Doyle, who was, of course, the creator of Sherlock Holmes. But, the principle of Zen Writing Navigation took me elsewhere.

There is a school of thought that says you should use a map when you are lost. Dirk Gently’s strategy is to find someone who looks like they know where they are going and follow them. He rarely ends up where he was intending to go, but often ends up somewhere that he needed to be. Back in 2010, Mangan played Gently in a pilot episode that was followed by three more episodes in 2012.

I followed Magnan and ended up writing this post, not one on Houdini and Doyle. And through this, once again proving the fundamental interconnectedness of everything.

Just as Sherlock Holmes was the world’s first (and greatest) private consulting detective, Gently was the world’s first, greatest and only holistic detective, created by the late Douglas Adams. I wrote about Gently here at Black Gate and if you haven’t read Adams’ two novels about him, you’re missing out on some terrific humor.

You might be familiar with the phrase, “Almost, but not quite, entirely unlike tea.” If you’re not, as soon as you finish reading this post, you need to read The Hitchhiker’s Guide to the Galaxy. Not watch the movie (which is better than people give it credit for), but read the book. Fortunately, this miniseries is closer to Gently than that phrase implies.

Mangan is the goofy, unconventional detective that often as not seems to be a con artist. He appears to be bilking an old lady out of money to find her missing cat in the pilot’s opening. The fact that he rarely gets paid in the end would militate against that sobriquet, however. Or at least, he’s not a very good con artist.

Darren Boyd fills the straight man role as Richard MacDuff. He mostly exists to point out the insanity and irrationality of Gently’s actions and plans. Unlike the dependable Doctor Watson, he’s not particularly steadfast and brave. He seems more like a “normal” sidekick in a Monty Python skit. He does have a sense of professionalism, which Gently constantly lacks and he does come into his own a bit in the final episode.

Gently, when offering assurances to a client, points out that sometimes he is so discreet his clients don’t even think he’s working. His ethics are certainly questionable, such as taking “expenses” from a client’s wallet after discovering the man’s body and accepting a case to find a woman’s stalker when he in fact, had been the one stalking her.

He constantly refers to MacDuff as his assistant, to which MacDuff immediately retorts “partner.” It reminds me of Gareth and David Brent on The Office. Under threat of death in the second episode (the pilot is considered the first episode for this post), Gently refers to MacDuff as his partner, who starts an “Oh, now that we could be murdered, I’m suddenly your partner” tirade. It’s pretty funny.

The series is not based on either of the Dirk Gently novels. Or the third, uncompleted one, The Salmon of Doubt (Which was cobbled together after Adams’ death). It is based on the characters of Gently and MacDuff, and that work out okay.

The witty phrases and short back and forths between Gently and MacDuff form the foundation of the series and they’re cleverly written. After having a pizza shoved into his face by an unhappy deliveryman, Gently complains that the advertisement clearly says that the pizza is free if not delivered within an hour. MacDuff responds that it probably doesn’t apply if you give them the wrong address.

Gently’s character does reflect Adams’ creation, even though the stories are original. Another example is, “’I’ve always found men with mustaches to be particularly untrustworthy. Hitler. Tom Selleck, cases in point.” The series is full of the kind of stuff Dirk Gently would say.

There are elements of Adams’ novel in the pilot, though modified. Gently catches MacDuff breaking into girlfriend Susan’s apartment. However, instead of being under an alien force’s mind control, he’s not after a voice mail message that he left; he’s stealing her laptop to delete a rude email he sent her. Gently toys with MacDuff using the ‘rules of housebreaking,’ just as in the novel.

Gordon Way has a completely different role and MacDuff never worked for him. Susan doesn’t play the violin, either. Gently hypnotizes MacDuff and tricks him into becoming a partner in the detective agency, which establishes the pair for the next three episodes.

The eagle-eyed observer will notice “Electric Monk” with an arrow to “bathroom” on the ‘case board’ just before Gently erases it. And there’s a refrigerator reference, which of course, is a huge element in the second book, The Long Dark Tea Time of the Soul.

In the second episode, Gently and MacDuff get drawn into a complex plot (hey – if everything is interconnected, it’s gotta be complex, right?) involving a piece of software that lets the user enter a desired outcome, then builds a flawless chain that leads to making that outcome appear completely reasonable. Having spent most of my career in the government sector, I can tell you that is how it often works – without the “completely reasonable” underpinning.

Astrology, murders, being completely on the wrong track: it’s all there and it all comes together in a quantum mechanics sense, of course. 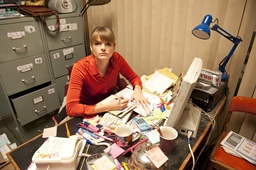 While she doesn’t have much to do, Lisa Jackson is quite fun as the perpetually unpaid secretary, Janice. Gently’s frustration at explaining to her why he can’t show a prospective client in, when he is already in (the office himself), gets a laugh. When MacDuff tells Gently to just pay her, the detective explains that it is only the infinitesimal hope that she will in fact, some day be paid, that keeps her coming in to the office at all. Even though she doesn’t do any work. It’s a one-trick pony, but it’s funny.

I think that the reason this series works is because Mangan and the writers capture Dirk Gently well. He’s not exactly as I picture him when reading the story, but it’s pretty close, and that’s more than good enough. There are plenty of laughs in the four episodes.

The series only lasted the one three-episode season (plus pilot), which is disappointing. And of course, Magan is now playing Conan Doyle, though at present, that looks to be a one-season adventure as well.

This Fall, BBC America is airing a brand new Dirk Gently series created by Max Landis (an American, Adams fan with a resume of ‘meh’ films).Samuel Barnett stars, with Elijah Wood playing his assistant, Todd. It’s booked for eight episodes, so we’ll get a bit more Gently this time around.

UPDATE – The new series will air in the US on BBC America, starting October 22. All eight episodes will be available on Netflix in December. Here’s a trailer.

All in all, I thought that Mangan’s Dirk Gently was a fun miniseries and worth watching. But you’re still best served reading, or re-reading, the books.

Next week, it’s Houdini and Doyle, proving even further the fundamental intconnectedness of all things. And for now, I’ll just say, so long, and thanks for all the fish.

Why do I have the suspicion that as you were working on the Houdini & Doyle piece, a person from Porlock came a-knocking at your door, Mr. Byrne?

Ironically, I read Dirk Gently’s Holistic Detective Agency as a gift from a friend (a huge Coleridge fan) who started it but lost interest, and I never could convince him to try to finish it.

Eugene – Nice Porlock reference. And of course, Porlock is a Holmes informer in Valley of Fear. It’s all interconnected!

I have an excellent BBC radio play of Dirk Gently and I listen to it every year. I’ve also got a cassette tape somewhere of Adams reading the book. Just love it.

Struggled with The Salmon of Doubt, though that could be because it was unfinished and cobbled together.

The Stephen Magnan series wasn’t great, but it was a fun watch.