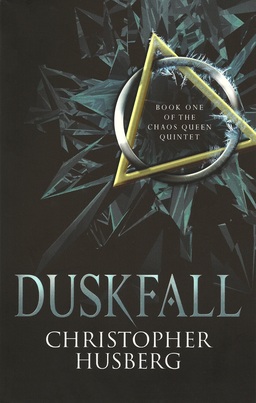 I tend to like my fantasy dark and gritty. Arthurian fantasy, romantic fantasy, light-hearted comedy… I enjoy those as well, but in smaller doses. And when I’m shopping for a new series, my eye tends to gravitate towards those that promise high stakes, rich settings, complex characters, and diabolical villains.

Christopher Husberg’s debut fantasy novel Duskfall looks like it could fit the bill nicely. It’s the opening volume in The Chaos Queen Quintet (which I assume means there will be four more?) The next volume, Dark Immolation, will be released in June 2017. Duskfall is due in trade paperback from Titan this week.

There Are Daemons That Even Daemons Fear….

Pulled from the frozen waters of the Gulf of Nahl, stuck with arrows and near to death, Knot has no memory of who he was. But his dreams are dark, and he can kill a man with terrifying ease.

Winter, a tiellan woman whose people have long been oppressed by humans, is married to and abandoned by Knot on the same day, when robed assassins attack their wedding. Her nascent magical abilities will lead her to a deadly addiction — and phenomenal power.

And Cinzia, priestess and true believer, has returned to her home city to find that her own sister is leading a heretical rebellion. A rebellion that only the inquisition can crush… Their fates will intertwine, in a land where magic and demons are believed dead, but dark forces still vie for power.

“Pulled from the frozen waters of the Gulf of Nahl, stuck with arrows and near to death, Knot has no memory of who he was. But his dreams are dark, and he can kill a man with terrifying ease.”

Mind you, a fantasy version of The Bourne Identity doesn’t sound too bad….

Was just checking out the author’s website. I found that he is a Mormon. So as a gay man, I’ll have to pass on this book.

Yeah, I understand. While the Mormon church has been unrelentingly harsh on gays, I’ve found a lot more diversity of thought among individual Mormons, though.

I have no idea what Husberg’s position is however, and you’ve got a limited amount of book money to spend, so I don’t blame you one whit for spending it in friendlier territory.

I’ll keep an open mind… if all my bookworm Fantasy friends love it perhaps I’ll re-evaluate. But yeah, red flag. Plus there’s so much dang great Fantasy these days. It’s tough enough to keep up with just the major releases.
Can’t seem to read more than 130 novels in a year.