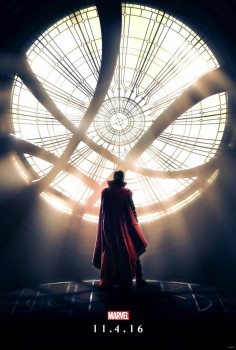 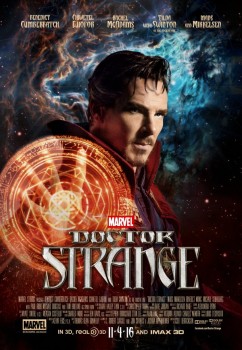 I made some allowances in my head for adapting Strange to the action/adventure movie form. I accept that it was probably market-wise to add some fisticuffs to a cerebral wiseman.

And I even accept that it was smart investing to tie the sorcery more closely to the physical action by making it a kind of adjunct to martial arts.

I also made allowances for matching this character to the cinematographic voice of Marvel Studios. There was more comedy in the Doctor Strange movie than I’ve seen in any of the comics, with some moments that could have been ripped out of a Guardians of the Galaxy script. Those pulled me out of the narrative, because I never bought a Strange book for comedy. I wanted cosmic dread.

That being said, I think that Marvel Studios is eating the DC movie franchise’ lunch because Marvel continues to go action-funny while DC clings to a grim-dark tone that wore out its welcome a while ago. 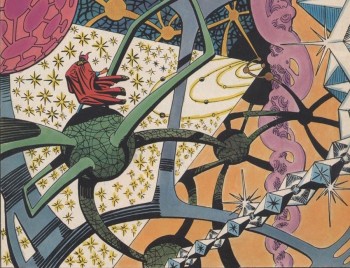 The comedic moments (which don’t overwhelm the movie, by the way) bring tonally closer to the current Jason Aaron comic series, although Aaron’s tone on the book may be matching the movie’s rather than the other way around.

I also prepared myself for the special effects. I love the comic book visuals from Ditko to Colan to Paul Smith and I was hopeful that special effects could bring a Ditko-esque visual board to life.

It wasn’t exactly Ditko. There were no ethereal pathways leading through fanged mouths into other dimensions, but they captured Ditko’s vision of the dark dimension interestingly.

So with these far-too-many caveats, what sort of tone and voice did give Doctor Strange the movie? That’s hard to answer.

To some extent not having a ready answer invites me to speculate that the movie has its own voice. It’s not the 1980s voice of Sorcerer Supreme, and certainly not the Elder-Gods-flavored voice of the 1970s championed by Englehart. But neither was it Ditko’s surreal cosmic voice of the 1960s. 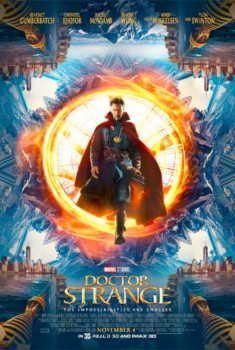 Don’t get me wrong. The world was at stake and all, but there were too many lighter moments and Stephen-Strange-as-a-prankster moments to accuse it of cleaving too closely to Ditko. The movie’s tone might best be described as reimagining Ditko’s Strange, adjusting for two major differences.

The first difference is that the teens and college students of the 1960s is not the audience of the present. The second is that Ditko and Lee were writing for 40,000-80,000 readers of comic books, not the many millions of movie-goers who have to drop their cash at the box office for the people at Marvel Studios not to lose their jobs.

I think this last factor is probably the biggest factor and the key to understanding the movie’s tone. The story and tone had to be mainstreamed to some extent to appeal to men, women, young, old, fans and non-fans.

That meant they could keep some of the kaleidoscopic, surreal visuals, but only insofar as they served the story. No extra breath-takingly cosmic panels for the pure joy of it, or just for the mood. And, of course, it had to be light and heroic.

None of this takes away any of my advice to go see this movie. But Doctor Strange #43 was one of the first comic books I ever owned, and I collected his whole 1970s-1980s series, and followed him to The Defenders.

So I’m coming at this from a 35-year-old place of love for Strange. Seeing what Marvel Studios did to my Strange was a bit important to me.

I’d be curious to hear what others thought. Leave a comment, especially if you disagree (although agreement is always fun, too…).

I liked it quite a bit although I have to admit to not being deeply invested in the character from the comic books.

If nothing else, we FINALLY got all of those city-folding scenes I’ve been wanting since that first Inception trailer.

(Also, for anyone who hasn’t seen it yet, there are two post-credit scenes, including one right at the end.)

Plan to see the movie this week and have bene waiting patiently for your further review of Doc’s series career-especially your thoughts on Roger Stern’s work and the return of Roy Thomas. Nice to see the movie off to a good start as I was concerned about the usual-auideence going Doc Who???–Pun intended.

I liked the movie, and don’t regret seeing it on the slightest.

Wish I could say I loved it, but just can’t. I agree completely with your many good points on why Marvel/Disney made the changes they did, likely to reach a wider audience. Nothing wrong with that in my mind. Still, for me personally,it is a Marvel movie where I would have loved to have seen more of a Joss Wheedon influence, and less of a “Harry Potter” feel. Very difficult to balance Lovecraftian darkness and dread with levity…

On the Ancient One: I completely understand your complaint, but I also feel Tilda Swinton is such a consumate character actress, that I am glad for her inclusion. …I think they made reference to her origin as “Celtic” in the movie, did I hear that right? If so, I believe if they’d made her skin a little “tanner,” they could have as easily claimed a Celtic/Mongolian cross, and Swinton would have made that just as believable.

I saw the lighter, slightly wry, tone used by the Dr. Strange film to be a logical storytelling choice.

Since the turn of the previous century Western entertainment of all stripes has been loaded with examples of Western characters heading East to pick up whatever skills, mental, physical or spiritual, were needed to overcome whatever issues were presented to them. From The Razor’s Edge to Batman: The Animated Adventures to The Last Samurai to Eat, Pray, Love to the radio Shadow picking up how to cloud men’s minds, the idea of an Eastern Education saving the protagonist and enabling them to overcome conflict has become a pretty weary trope.
Presenting it unadorned, unmodified, to a modern audience would be risky at best.
The film had to take this into account—it couldn’t simply depict the storyline or the tone of the original Marvel comic exactly as they were presented fifty years ago.

More than that, the actual nature and details of much Eastern thought and mysticism have become familiar enough to modern audiences that the film had to deal with that as well.

This was done, masterfully I thought, in the scene in which Strange declares what the Ancient One is showing him to be something he’d seen in a Gift Shop, her repartee to his scorn (“Seen that in a gift shop?”) at once acknowledges the audience’s familiarity and defies it. This approach managed, at once, to get a big laugh and re-establish the sense of wonder that the story needs.

I really liked this movie.

Saw it and loved it.

Every story is a product of the time it is told in. For the mid 20teens, that means sarcasm and irony are pretty much a given.

And it’s a Marvel movie and as you point out, they have a pretty good formula to have some levity in all things.

But none of it injures the characters or their standing in the story.

In addition to the two post credit teasers, be sure and pay attention to the notice about “This is a work of fiction. All characters, etc. etc.” There’s a little bit at the end of that too.

Once again the Marvel Cinematic Universe pulls off introducing a new superhero that breaks away from what they’ve done to date, yet keeps the spirit of the MCU. I particularly liked the final showdown with Dormammu. It wasn’t a punch fest, instead Doctor Strange thinks it through and beats Dormammu at an intellectual level.. (And I can’t help contrasting it with the handling of the punch-fest climatic showdown in Ghostbusters (2016).)

Not my favorite marvel movie, but I enjoyed it. I recently read most of the Ditko issues for the first time and The Oath earlier this year. This movie seemed a lot closer to the oath in tone and scope. Which isn’t necessarily bad.

The only thing they left out that I would have liked to see is Dormmamu’s full body. Flaming head and all.

I did like the changes to Mordo. I mean he had to be good at some point for the ancient one to take him in.

Saw the movie this past Sunday, greatly enjoyed it. However, I would have liked some more character history on Strange, and just about every one else too. Couldn’t help comparing it to the first Captain America on that score, and finding it came up short. Also found it unconvincing that a man who’s supposed to be so brilliant would drive in a way so obviously and blatantly stupid. Amazing he didn’t kill himself earlier.

And didn’t he defeat Dormmamu by basically annoying him to death?

Nevertheless, in spite of these complaints I *did* enjoy the movie, and would recommend it.

Joe: The city folding scenes were what seemed to me to be the most tonally (not literally) faithful to Ditko’s psychedelic art.

Allard: You’re right! I haven’t finished my blog series on Dr. Strange. I had left off right before the the Gene Colan era.

AWABooks: Thanks! I wonder if the Whedon’s voice (Buffy, Angel, Avengers, Firefly) would have smothered the original Lee/Ditko feel? Speaking of Lee, that was a pretty thin cameo….

John H: I totally take your points. The original source material has *a lot* of cultural problems and Lee in later years never tried to defend those early choices which were highly stereotyped.

Fritz: Yeah – it was cool see a problem solved by brains and wisdom rather than brawn. That is classic Dr. Strange.

Glenn: I did love Mordo’s arc and was telling my son about the characters on the way to the theatre. I was less thrilled about the Ancient One’s relationship to Dormammu, although in the first few appearances in Strange Tales, they did call on Dormammu as much as any of the other powers.

Jeffrey: Did you catch the “don’t text and drive” note in the credits? hahaha