I’ve always liked Dr. Strange. Issue #43 was one of the first four comics my mother gave me in 1980. Stephen Strange is a lonely, stoic hero whose scope of danger and action is nearly always cosmic, and whose inner demons are as powerful as anything he faces with magic.

By the time I was finishing high school, my collection had grown to the point that I had a pretty good grip on his adventures from his first appearance in 1963 to his loss of everything in the late 80s.

Our fearless leader John O’Neill blogged recently about the news of the Dr. Strange movie. I don’t know how I feel about the movie — I have a lot of trouble with disappointing adaptations, but like I did with the Adam Warlock books, I’d like to take a retrospective look on my favorite comic sorcerer.

In my head, the classic Dr. Strange can be broken into three periods. In this post, I’ll look at the establishment of the Dr. Strange mythos in the Lee-Ditko era (roughly Strange Tales #130-#141).

In the early 1960s, there were essentially two creative engines at Marvel. Stan Lee and Jack Kirby had created Thor, the Hulk, the X-Men, Iron Man, the Avengers, and the Fantastic Four. Stan Lee and Steve Ditko had created Spider-Man.

Other artists were being brought in to fill in for Kirby as he and Lee built new properties, but until Roy Thomas would come, it was essentially just Lee. Not only obviously, but famously, Lee couldn’t create all those stories, so the Marvel method came to be Kirby and Ditko plotting and even drawing the stories, and then handing them to Lee for dialogue.

Ditko came to Lee one day in 1963 with the idea for a new character, Dr. Strange, a master of mysticism. They decided to run him in Strange Tales #110 and he shortly became a regular feature.

Strange Tales offered two stories each month. In the beginning, Strange shared his book with the Human Torch, and later, he shared it for a long time with Nick Fury, Agent of SHIELD.

Between #110-129, Strange the sorcerer defended the world from increasingly eerie and powerful enemies, although quite often, Baron Mordo, his demonstrably inferior nemesis played the villain. All the same, the psychedelic art of Ditko and Lee’s faux-spooky Eastern-flavored dialogue began to collect an audience.

Strange Tales #126 was a landmark, with the introduction of Dormammu, Lord of the Dark Dimension. Here was a heavy so powerful that some of Strange’s earlier spells had actually called on Dormammu to power them.

Dr. Strange travels to the Dark Dimension in and is totally outclassed. However, a very pulpy plot device (an alien princess takes pity on the brave and handsome stranger) puts Dormammu in a bind and Dr. Strange heroically helps him, which results in Dormammu reluctantly swearing not to attack the Earth. This is important, because this promise and the anger of Dormammu drives the entire arc from Strange Tales #130-141.

See, I guess interdimensional mystical law isn’t as clear as common law. Although Dormammu promised not to attack the Earth, he didn’t promise not to give overwhelming power to Baron Mordo, who, once he killed Strange, would render Dormammu’s promise to Strange moot.

So, Strange Tales #130 starts with a tremendous bang, with Mordo being given the energy to cast powerful spells, empower weaker sorcerers, send out ghostly pursuers and travel anywhere on Earth in seconds. Immediately, Mordo’s flunkies overwhelm Strange and he has to run, carrying his frail master with him, little knowing how Mordo became so powerful. 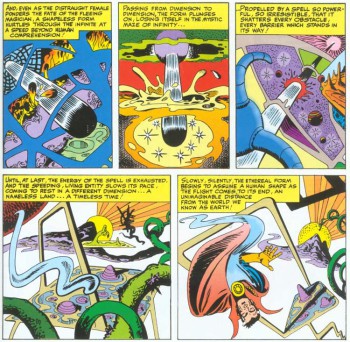 It is hard to imagine what this must have been like to a reader of the early 1960s. I guess that this is one of the first times a story line was carried across an entire year of comics, with the tension unrelenting for that entire time. Tone-wise, it feels very much like what The Bourne Identity would be like, if Matt Damon was Master of the Mystic Arts and drawn by Ditko.

It is worth taking a few moments to really appreciate Ditko’s art. While he’d always created moody, dark scenes, and many spooky monster images through the 50s and 60s, Dr. Strange was where his artistic sensibilities could explore psychedelic areas, and given the creative relationship between him and Lee, there were very few limits on where he could go.

So, the lines and forces of the mystical fight scenes follow their own logic and ‘physics’ (metaphysics?). The hurtling views of strange dimensions and even the streets of Hong Kong and the mysterious caves of the Himalayas are given powerful urgency by the headlong chase that he carries on through eleven half-issues.

(The chase carries on through other dimensions, the Earth’s core, the middle of an airplane, and the corona of the sun, for those with score cards…)

Nor are settings the limits of Ditko’s canvas. He’d already created Dr. Strange, Dormammu, and Clea. He goes on to create a network of shady mystics around the Earth ready to do Mordo’s bidding, extra-dimensional sorcerers, the Aged Genghis, and one of the new cosmic beings of the Marvel Universe, Eternity, a massive cloaked figure entirely filled with stars and the vast cosmos. Eternity is a visually-striking character who could only have been created by an artist.

It’s not just psychedelia though. The frenetic pace of the eleven issues carries moment to moment, leaping from event to escape, with outgunned Strange surviving as much by mystical skill as by insight into human fears and old-fashioned cunning.

What did this eleven-issue Ditko-Lee run on Strange Tales do for comics? I think it certainly opened new artistic opportunities for artists, and artistic expectations for readers. Would readers have been ready for Steranko on Nick Fury or the X-Men if Ditko hadn’t have broken so much ground on Strange?

It also was one of the first (if not the first) year-long run of a story-arc, something very abnormal for the growing Silver Age of Comics.

It also cemented the foundation for the Dr. Strange mythos. It knit together a long of the axes of conflict that would be played out for decades between Strange and Dormammu and gave future creators an infinite canvas upon which to play.

Lastly, I think that the subtle effects on the Marvel Universe by creation of Eternity can’t be overstated. While the Avengers had Loki and Kang, and the X-Men had Magneto, and these were big baddies, but not in a sense truly cosmic. The Fantastic Four and the Dr. Strange were building on a cosmic scale.

The Watchers and Galactus in the Fantastic Four, along with Eternity in Dr. Strange begin to reveal a metaphysical realm above the concerns of humanity, and above the touch of science.

These building blocks would play become expanded in later Dr. Strange stories, as well as in Jim Starlin’s Warlock Saga (which I blogged about here) with the creation of the In-Betweener, Order and Chaos, Death and the Infinity Stones.

And I would guess that the readers of this time, including a lot of teens and young college students who were were part of the psychedelic aesthetic of the time, realized that they’d seen something marvelous and mind-blowing in this run of Strange Tales.

In the Part II of this blog series, I’m going to look at how Marvel in the early 1970s added far more spiritual depth to Strange, partly through the addition of elements from Howard and Lovecraft, partly by tapping into the mood of that decade.

This was great. I enjoyed your Warlock posts as well. Thanks to Marvel Unlimited I recently read the warlock books and continued reading the Thanos and Infinity story lines.

I’m reading infinity crusade right now. I keep jumping back and forth between the older and newer material. While I love the Silver Age art and overall story arcs. I’m not a huge fan of the writing and I get kind of burnt out if I read more than 5 issues at a time.

IMO things like “Dr.Strange” are rare occurences when the publishers just “Leave it alone” and only pester it if sales are too low. I’ve heard Spider-Man needed as far back as the mid-90s permission from a board of investors on which street he swung down because he was such an important property.

And the legacy Dr.Strange made is still felt by Marvel today. Also society – it’s been accused (like Harry Potter) of corrupting the youth/turning them to the paranormal – while it’s obvious it had NOTHING whatsoever to do with any “Real” paranormal stuff. They scream “Racism!” today over the made up places in the orient and Strange’s “Manservant” – Wong… when all they were doing is following cliche themes at the time. And later marvel comics and writers have made clever references to it.

They got pretty daring, especially the “Brunner” days. I liked especially the “Size-Neg/Genesis” one where a wizard from the far far future travelled into the past to absorb all the magcial energy in an attempt to become God – and actually succeeded… Of course the religious loons were freaking out worse than anything short of the “Aurora Model” kits.

In a way it’s a similar thing to Frank Miller’s run on “Daredevil” – they let the new kid do some inking/art work – but he was chock full of better stories than the writer – so next thing he turns one of Marvel’s most cliche “Token” character who was still white (handicapped superhero coz diversity social pressure thing) into one the most incredible, dynamic characters in comics. Gave new meaning to “The courage of the blind”. Then when Marvel noticed Daredevil – a book they were about to cancel once they could do it without protests – had skyrocketing sales – whoop they take over the reigns, keep Mr Miller away from the typewriter, Electra must LIVE…etc.

[…] (Black Gate) Dr. Strange, Part I: Establishing the Mythos: Master of the Mystic Arts in The Lee-Ditko Era — “It also was one of the first (if not the first) year-long run of a story-arc, […]

That was a great overview!

Thanks Ken! The old stuff has its ups and downs, but some of them are joyously creative classics! 🙂