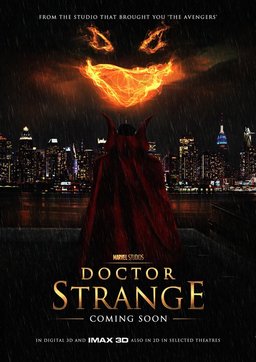 Marvel Studios has certainly been dragging its feet with the long-delayed Doctor Strange feature film. It still doesn’t have a release date. (Or a star. Or a director.)

That hasn’t stopped enthusiastic fans from trying to nudge the project along with fake trailers and posters, like the fan-made effort from Mesmeretics at left. C’mom, Marvel. If fans can make something that looks that sharp, so can you.

I consider Doctor Strange to be the last major untapped Marvel property and I’m a little cranky that C-listers like Ant Man and Rocket Raccoon are making it to the silver screen before he is. It wouldn’t surprise me if Baron Mordo was behind it all, somehow.

Doctor Strange was created by Stan Lee and Steve Ditko (the same team that created Spider-man) in 1963. He has flirted with live action versions before… there was a 1978 TV movie starring Peter Hooten, which I watched after school and thought perhaps was the coolest thing in the history of ever. In 2005 Paramount acquired the rights to Doctor Strange from Miramax and in 2008 reports surfaced that Guillermo del Toro was attached to direct and that he’d approached Neil Gaiman to do the script. Never happened.

More recently, in June 2010, Marvel Studios hired Thomas Dean Donnelly and Joshua Oppenheimer, the team behind the underrated Sahara and the 2011 reboot of Conan the Barbarian, to produce a script, and in January of last year Marvel Studios president Kevin Feige confirmed that Doctor Strange would be part of “Phase Three” of the so-called Marvel Cinematic Universe. In November, he confirmed that a Doctor Strange feature is in development, but so far no additional details have emerged. And so we wait. 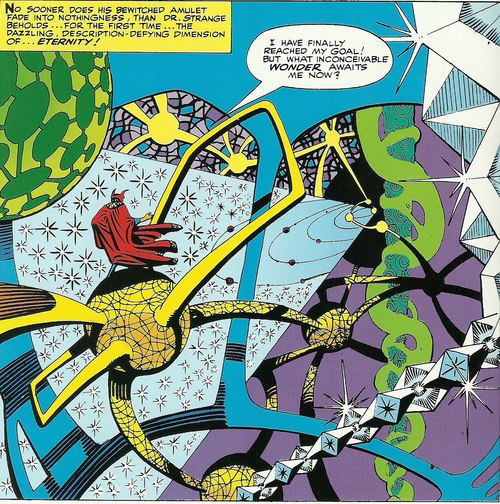 To be honest, I’m likely to be disappointed by a cinematic version of Doctor Strange. In my mind, there’s really only one way to approach it: as a tribute to the fantastic art of Steve Ditko, and in particular the fabulously colorful and mind-bending visual shorthand he developed to portray the dimension-hopping adventures of his sorcerer-hero.

In short, a Doctor Strange movie would have to be able to replicate the excitement that Ditko brought to those early stories, as Strange learned to navigate the twisted and bizarrely connected corridors between worlds of reality and un-reality, and the strange and mysterious realms and incredible creatures he found there. 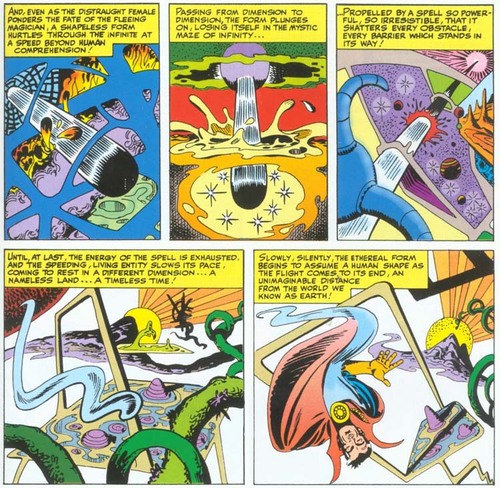 If the movie doesn’t capture the spirit of those early Lee-Ditko stories, such as Strange’s epic battles with the god-tyrant Dormammu, ruler of the Dark Dimension, or the apocalyptic threat of the Mindless Ones, I think it will have missed a huge opportunity. But bringing that kind of visual spectacle to the screen will be a monumental task.

Monumental, but not impossible. Marvel Studios proved they were capable of capturing fabulous, awe-inspiring vistas on screen in the Thor movies, with their depiction of Jack Kirby’s Asgard, which did not disappoint.

But unless you decided to set the entire film on Earth — a major mistake, in my opinion, and a waste of the franchise — then you’ll have to tackle Strange’s dimensional travels. And that’s a challenge that both excites me and frightens me. I remain unconvinced that movie makers can pull it off in a way that will satisfy me. 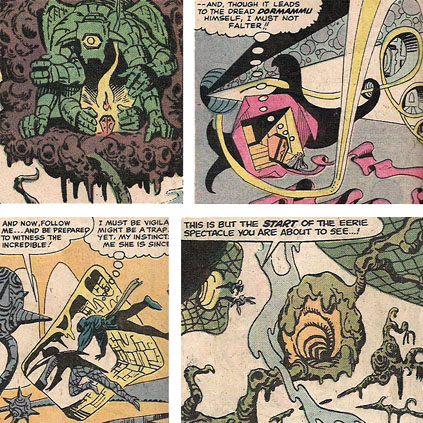 Nonetheless, I’m still looking forward to Doctor Strange. They call it the magic of Hollywood for a reason. I’ve been dazzled countless times by special effects in a movie theater. It’s just rare that my expectations have been this high.

May the Eye of Agamotto guide you, Marvel Studios. You’re going to need it.

I don’t know how Marvel will approach an explicitly fantasy based franchise like Dr. Strange. The general thrust of the Marvel Cinematic Universe has been to “do in the wizard.” But, so far, Marvel hasn’t disappointed me with their films.

I’m of a different core, finding very little to enjoy in most of the Marvel movies. All flash and little substance, in my opinion. At least the special effects look good, and I don’t hate the movies, just don’t care much for them. But I could say that about almost everything Hollywood does nowadays. If only there could be a way to combine today’s special effects with the character and story-building sensibilities of a Spielberg circa early 1980s. Ah, it is to dream.

But more on topic, in the late 1970s Marvel released a handful of small paperbacks, each collecting the earliest adventures of major characters … the Hulk, Spidey, Fantastic Four, Cap, Avengers, and Doctor Strange. I’ve got all of them, as beat up as they are today, and the one for Strange might be my favorite. Would I give a Strange movie a chance today? Yes. Would I love to see that roll into a Defenders movie? Yes!

The big problem would seem to be how to tie Doctor Strange in with the rest of the Cinematic Universe. My dream Doctor Strange project would be a television series, maybe something like Sherlock, where three or four mini-movie episodes come out per year and the whole Dormammu/Mordo plotline can evolve more slowly as the Master of Mystic Arts takes on lesser threats to establish his character.

> I don’t know how Marvel will approach an explicitly fantasy based franchise like Dr. Strange.

Interesting. And you’re right, Marvel hasn’t made a habit of being fantasy-friendly (even the explicitly fantasy hero Thor, the god of thunder, was turned into a member of a fantastically advanced race.)

In so many ways, Doctor Strange will be a major departure for Marvel. Still, it starts with the script, and I really enjoyed SAHARA, an ensemble action-comedy. I think the writers could pull it off.

> I’m of a different core, finding very little to enjoy in most of the Marvel movies. All flash and little substance, in my opinion.

Even the first IRON MAN movie? That one is the high water mark of superhero flicks, in my book.

> Would I give a Strange movie a chance today? Yes. Would I love to see that roll into a Defenders movie? Yes!

I didn’t even think of the DEFENDERS angle. Whew… they’d have a lot of other characters to develop before they could make that happen! Namor, Valkyrie, the Son of Satan, Luke Cage… and eventually, of course, Howard the Duck. Just think of a Howard the Duck reboot! The mind boggles.

> My dream Doctor Strange project would be a television series, maybe something like Sherlock, where three or four mini-movie episodes
> come out per year and the whole Dormammu/Mordo plotline can evolve more slowly

I vote we give Michael Penkas complete control of the Doctor Strange franchise. All in favor?

Doesn’t Fox own the rights to Namor?

[…] Hurry Up With That Doctor Strange Movie, Marvel […]

[…] it here, I hope the film draws inspiration from Ditko’s fantastic art, and especially the way he portrayed the dimension-hopping adventures of his sorcerer-hero. Marvel announced the director would […]

Black Gate » Blog Archive » Dr. Strange, Part I: Establishing the Mythos: Master of the Mystic Arts in The Lee-Ditko Era

[…] fearless leader John O’Neill blogged recently about the news of the Dr. Strange movie. I don’t know how I feel about the movie – I […]