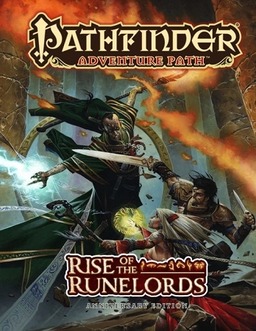 Paizo Publishing’s Pathfinder RPG has made a habit of breaking new ground. Or, in a sense, re-breaking old ground in completely new ways. They’ve revolutionized Dungeons and Dragons 3rd edition by re-imagining it into the Pathfinder RPG. Their Pathfinder Adventure Path series seems to have transformed the scope of what can be done with pre-generated gaming modules. Their Pathfinder Tales line of novels set in the Pathfinder world of Golarion are frequently praised around the Black Gate world headquarters, only a fraction of which spills over onto the website. And, last year, they transformed the deck-building game with the Pathfinder Adventure Card Game (which, I promise, I will review one of these days! – but for now you can get it on Amazon).

Now they’re moving in a similar direction with their Pathfinder Legends line of audiobooks. Instead of adapting the Pathfinder Tales novels, they’re instead focusing this series of audiobooks on adaptations of their Adventure Paths. And, instead of merely being audiobooks relating a narrative of the adventure, these are instead full audio productions with a cast of talented actors, heralding back to the glory days of the radio age… but with modern production values. You can get a hint of what to expect from this audio trailer. It introduces the first episode, “Burnt Offerings,” which is the first installment of their Rise of the Runelords Adventure Path (Amazon)

If what you hear interests you, the first installment of Pathfinder Legends is available now for order through Paizo’s website. For a limited time, they are offering the first audio production at the discounted subscription price even if you don’t subscribe. This means you can order the audio CD for $12.79 (normally $15.99) and the audio download for $10.39 (normally $12.99). It’s not exactly clear when this offer will end, but they’ve said that it will last until the Pathfinder Legends subscription plan is available online.

These are being done by Big Finish Productions, who were the first ones to revive the Doctors of ‘Doctor Who’ in their own audio adventures, even before the series was finally revamped on t.v. in 2005.

And, while Doctor Who Audio adventures are their main claim to fame, they have revived many other shows in the audio format – including Dark Shadows and recently, Blake’s 7.