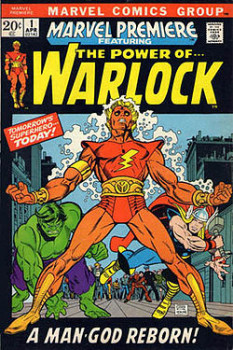 I think that my first encounter with Adam Warlock was in The Power of Warlock #2. Even at 11 or 12, I gravitated towards the lonely, brooding heroes of the Marvel universe, like Daimon Hellstrom and Doctor Strange, so I was hooked on my first look at Warlock. Like Hellstrom and Strange, Adam Warlock walked around with a heavy touch of destiny and Warlock #2 was a pretty brain-expanding issue. I read a lot of Adam Warlock since then.

In my head, I break down Adam Warlock’s history into three periods: (1) pre-Jim Starlin, which covers from his “birth” to the cancellation of his series in 1973, (2) the Starlin era, covering from 1975 until Warlock’s death in 1977 and (3) the post-Starlin era (which I name with wild inappropriateness, because Starlin still had a big hand in it), which basically covers Warlock’s resurrection onwards.

In this first post, I want to talk about the first period, the pre-Starlin Adam Warlock. I have always felt that this run of comics is a bit like a tiny restaurant serving great food that no one knows about but me.

Adam Warlock’s origins were decidedly guest-starry, appearing in Fantastic Four #66 as a synthetic creation of one of the many super-science world-domination groups that are produced by the gradate schools of the Marvel Universe. He fought the FF, got his ass handed to him and went back into his cocoon.

Later on, as a guest-star, he also ends up fighting Thor somewhere and going back into his cocoon, still without a name other than Him.

The real genius of his origin comes with Roy Thomas and Gil Kane, who reintroduced him in Marvel Premiere #1 and embed Him within a religious-cosmic-moral framework. The High Evolutionary, in the role of God, has created a perfect Earth (the Counter-Earth), but, like the biblical story, evil worms its way into the Eden. 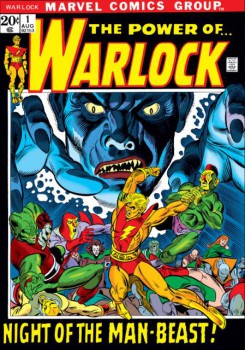 If you buy into the premise, this is heady stuff, with the possibility of real social, moral and religious commentary and cosmic allegory. It was beautifully drawn by Gil Kane and written by Roy Thomas. Thomas’ scripts are always baroque and wordy, like Stan Lee dialed up to 11, like a precursor for the more mature, voluminously-written style of Claremont. But, as with the art, there is beauty in the words and the Messiah story Thomas creates.

It took only two issues of Marvel Premiere to graduate Adam Warlock to his own series called The Power of Warlock. Unfortunately, as happened in many other titles in a time of innovation and experimentation, as soon as The Power of Warlock was on its own wobbly legs, its A-game creators went off to do something else.

Warlock continues fighting evil, in the form of Man-Beast and his group of animal men, while exploring Counter-Earth and its weird, alternate differences, like Reed Richards being the monster The Brute, and Professor Doom being a hero.

The series drifted, with one- and two-shot story arcs that were limited in scope and ambition. Last pre-Starlin issue was The Power of Warlock #8. The story had moved away from the Messiah theme that had made Warlock so fascinating. He was still a lone hero on Earth-2, but he had little identity beyond being an alien to Earth-2. And the art had become muddied and uninspired.

So, why do I still have my old issues and why do I want to blog about this? For a 13-year old who didn’t fit into his own time and place (of course I’m talking about… a friend) there was still an appeal to this stoic, heroic isolated hero who wandered, imposing a justice on a world of people who didn’t want him and didn’t even really exist.

And even the tantalizing hints of a larger cosmic struggle, an originally moral one for comics, was an appeal. Of course, the central tragedy is that they didn’t follow this thread, so this was another comic whose potential was never realized.

I can see why the series stopped publishing, but I can also reread this phase of the Adam Warlock mythos and appreciate what the creators had tried to do and wonder how they might have done if they’d stuck closer to the weird vision they’d had at the beginning.

Musical Aside: I don’t know if anyone else does this, but for the last ten years or so, I listen to period music when rereading my comics. So, as I dove back into Adam Warlock, I pulled out the good and bad of 1972 and 1973: Santana, Bread, the Carpenters (just like the President of the US on Earth-2!), Neil Young, and America. It adds a contextual mood to the read. I highly recommend doing this.

I take a look at the second phase of the Adam Warlock mythos, the Starlin era, in The Three Phases of Marvel’s Adam Warlock, Part Two: The Magus Saga.

If you want to read more about this period of Adam Warlock’s life, I found an excellent issue-by-issue summary by a blogger whose opinions on the creators and the stories were largely the opposite of mine, so… diversity!

Derek Künsken writes science fiction, fantasy and horror in Ottawa, Canada. He tweets from @derekkunsken and his website from www.derekkunsken.com.

While waiting for the second film in the original Starwars trilogy to come out, I started buying the UK marvel comic of the same name. I remember the strip about the starwars characters being pretty lame, and guilty of one hilarious gaff – the assumption at the time was that Luke and Leia were going to end up together and the comic ran with this idea, necessitating a major u-turn later on. I actually much preferred the other stories, in particular ‘Micronauts’ and ‘Warlock’ both of which (unbeknownst to me) had appeared in other comics previously. In retrospect, ‘Micronauts’ owes a big debt to that old classic ‘The Girl in the Golden Atom’. In ‘Warlock’, the hero travels into the future to confront his evil self, now a powerful sorcerer called ‘The Magus’. Mind-blowing stuff to my fifteen-year self!

In our Big Box o’ Random Comics when I was young we had just one Warlock issue — the first one with the Star Thief, which was from Starlin’s run, but which also included a recap of Warlock’s origin. I have the volume collecting the Starlin run; I should see if I can track down the earlier issues.

I’m actually rereading Micronauts even as we speak — I went onto Amazon last week and filled in the last couple of holes in my collection. It’s actually really solid stuff; I’d love to see it reprinted, but it seems very unlikely due to the licensing issues (the Micronauts comic was based on a line of toys in the late 1970s).

Aonghus: I loved the Star Wars comics I had. Until Empire Strikes Back came out, they were all we had – it was my first experience with tie-ins and seeing all the world beyond the movie. I Loved the Baron Tagg sequence, but didn’t like the Carmine Infantino art so much. And on Micronauts, issue #12 was among a pack of 4 comics that were my first pack. Loved them too, and art by Michael Golden and Pat Broderick. On the Magus, wait ’til my next Warlock post! I’m rereading the Magus sequence now for that 🙂

Joe H.: I love the Starthief sequence and may mention it in my Warlock posts, although it belongs to neither the Magus arc nor the Thanos arc (the two I was going to do). It was interesting to see what Steve Leilola’s art did to the tone of Warlock.

Maybe in the future posts, it’s worth going back and taking a look at the micronauts? Toys and comics?

Black Gate » Blog Archive » Dr. Strange, Part I: Establishing the Mythos: Master of the Mystic Arts in The Lee-Ditko Era

[…] the movie — I have a lot of trouble with disappointing adaptations, but like I did with the Adam Warlock books, I’d like to take a retrospective look on my favorite comic […]