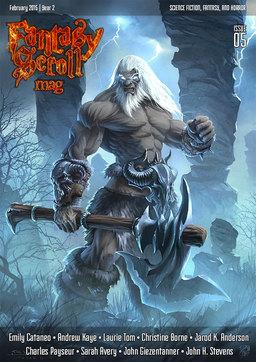 The fifth issue of the Kickstarter-funded online-only Fantasy Scroll Magazine is now available.

Fantasy Scroll was launched with an Introductory Issue #0 in January 2014, which was used as a proof-of-concept for a Kickstarter campaign. The campaign ended on April 23, 2014, raising $2,956 against a $2,500 goal, enough to fund a full year (four issues).

Fantasy Scroll has become a poster child for the right way to fund and launch a new fantasy magazine. All four issues were released last year, as promised, and the mag has been successful enough to self-fund issue #5. It’s accomplished that by selling merchandise, launching a mobile app, soliciting donations — and additional funding drives, creating a Starlight Patrol of enthusiastic backers and supporters at Patreon who help keep the magazine going.

Fantasy Scroll has published original short fiction by Ken Liu, Mike Resnick, Piers Anthony, Cat Rambo, Rachel Pollack, Seth Chambers, and many others. The magazine is edited by Iulian Ionescu, Frederick Doot, and Michelle Muller. It’s published quarterly, and the contents include all kinds of fantastic literature — science fiction, fantasy, horror, and paranormal short-fiction — and run the gamut from short stories to flash fiction to micro-fiction.

Issue #5 is cover-dated February 2015, and includes 10 short stories from Emily Cataneo, Laurie Tom, Jarod Anderson and others — including “How the Grail Came to the Fisher King,” a new story by Black Gate author and blogger Sarah Avery. 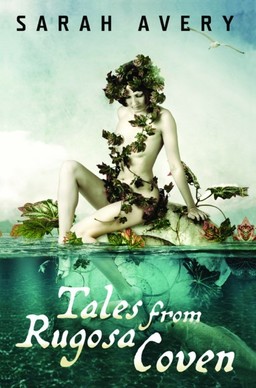 Here’s a snippet from the interview with Sarah:

The obvious way my life in Wicca has affected my fiction is that the three novellas collected in Tales from Rugosa Coven are rooted solidly in a Pagan community. Those stories are about a recognizably real coven of Wiccans in a version of New Jersey that’s far weirder and more supernatural than the New Jersey I used to live in. I love it that so many Pagan readers — not just Wiccans, but also Druids, Asatruar, and others — have delighted in seeing their social world on the page, warts and all. I also love it that non-Pagan readers, including some who knew almost nothing about Paganism, have enjoyed those stories as stories, about human beings who laugh and suffer and make choices they never expected to make. You don’t need to know or believe any particular thing to get the stuff that’s funny and the stuff that’s deep in that book.

It’s about the family you make. The first of the stories, “Closing Arguments,” is about balancing the family of people you choose with the family you’re born to. I think everyone can find something to relate to there.

I hope so, anyway, because it’s one of my main preoccupations as a writer, no matter what kind of fantasy I’m working on. My sprawling epic family saga has a lot of thematic overlap with my wry contemporary fantasy novellas.

The cover this issue is “Lightning Champion” by Todor Hristov. We last covered the magazine with issue 3.

Thank you for the mention! I’m so glad to see that story out in the world, and Iulian’s interview questions gave me a lot to work with.

In theory, a podcast version of the Grail story that I recorded should be available at Fantasy Scroll soon, too.

Glad to hear it! I saw they had a podcast editor, but I didn’t see any podcasts? Or was I just not looking hard enough?

The podcasts are over here. There’s a podcast button in the line of navigation buttons near the top of the page.

That one worked. Thanks Sarah!