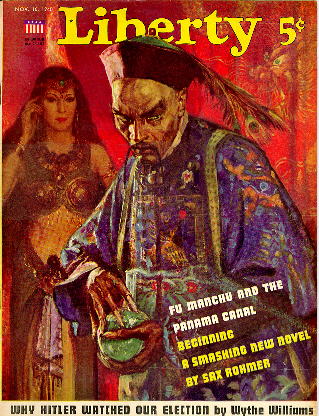 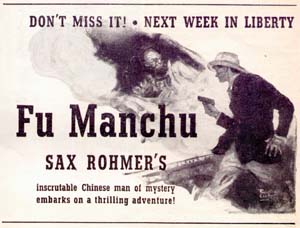 The previous book in the series was published just prior to the outbreak of the Second World War in Europe. Rohmer chose to portray characters such as Hitler and Mussolini under thinly disguised aliases. More critically, he chose to have these threats to world peace removed by the conclusion of the book as he naively believed a Second World War would be avoided at all costs. Over a year into the war, Rohmer had to address these issues for his readers. His excuse was a brilliant one. The prior narrative had been censored by the Home Office. Bart Kerrigan was forced to alter names and events. Hitler and Mussolini yet lived.

Interestingly, Rohmer chose to pick up the story some months after the last title and reflect changes in the lives of his characters. The Si-Fan has fallen under an unnamed pro-Fascist president who counts Fu Manchu’s duplicitous daughter among his closest allies. The Devil Doctor himself has fallen from grace within the Si-Fan, as he opposes fascism at all costs. This rift threatens to tear the secret society apart as much as the war was doing the same to governments around the world.

During the intervening months, Bart Kerrigan has seen Ardatha fall back into the Si-Fan. When the novel begins, Kerrigan is visited in London by Sir Lionel Barton. Nayland Smith is out of the country and Sir Lionel has brought with him a hidden object that is the key to the Si-Fan’s current operations in the Caribbean. No sooner has Barton revealed this fact then Kerrigan spies Ardatha standing in the street outside, staring into his apartment. 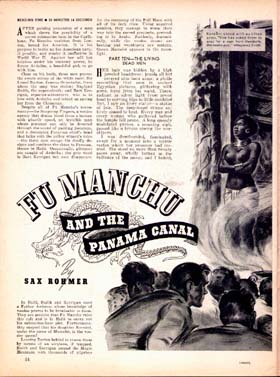 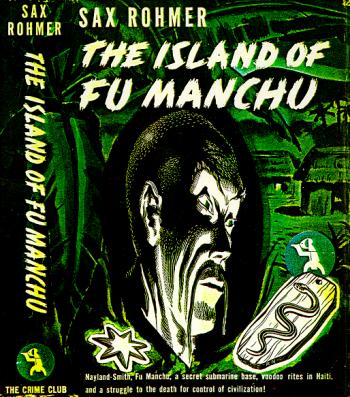 Leaving Sir Lionel behind, Kerrigan pursues Ardatha through London, but loses her once more. When he returns home, he finds Sir Denis Nayland Smith waiting for him. Sir Denis states he is looking for Barton, as he believes Sir Lionel has something valuable for him. Learning that Barton has disappeared after Kerrigan pursued Ardatha, Sir Denis quickly concludes the girl was used as a ruse to allow the Si-Fan to abduct Sir Lionel.

Smith explains the key is the Panama Canal, from which the Si-Fan manages operations in the Caribbean and has a secret submarine base. Sir Lionel had located the base. This was why the Si-Fan had to prevent Barton from contacting Sir Denis. Thanks to Kerrigan noting the license plate of the car Ardatha climbed in during their pursuit, they soon trace the vehicle to a German doctor running a clinic in Regent’s Park.

Scotland Yard’s surveillance of the clinic confirms that Dr. Fu Manchu, Ardatha, and Barton are present. Smith and Kerrigan burst into the clinic just in time for the journalist to shoot the German doctor dead before he can inject Sir Lionel with a formula to make him more susceptible to Fu Manchu’s brainwashing. While Smith sets off in pursuit of the fleeing Devil Doctor, Kerrigan confronts Ardatha and learns she has had her memory wiped and has no knowledge of him, although she is still strangely attracted to him. While Kerrigan is distracted with Ardatha, he is overcome by an unseen assailant and knocked unconscious.

When he recovers, Kerrigan finds himself a captive in Dr. Fu Manchu’s secret laboratory. He is both awed by the man’s genius and repulsed by his experiments with human specimens. While Kerrigan seems fated to spend the rest of his life a slave to the Si-Fan, aid comes from an unexpected quarter. Hassan, a loyal servant of Ardatha, frees Kerrigan and helps him escape by leading him to a point in the clinic where he will be discovered by Sir Denis and Inspector Gallaho of Scotland Yard, who have been vainly searching for Fu Manchu all over the grounds of the clinic.

As strong as the writing is throughout, the fact that Rohmer was deliberately recycling whole scenes from the earliest Fu Manchu books weighs heavily upon the reader. This is most troublesome when the mutilated body of an undercover Scotland Yard man leads Kerrigan to the dead man’s apartment in the hopes of recovering the detective’s notes. Ardatha arrives first and burns the notes in the fireplace before they can fall into Sir Denis’s hands. This exact same sequence occurs in the original book between Dr. Petrie and Karamaneh and, as in that book, the encounter only strengthens the bond between the two star-crossed lovers.

The first quarter of the book concludes with a crucial meeting between Sir Denis, Sir Lionel, and Kerrigan. The journalist is brought up to speed on the Si-Fan’s quest for Portuguese treasure in Haiti to fund their current operations, which include a secret submarine base in the Panama Canal. Smith informs the others he is acting for the War Office and they may consider him their commanding officer as they prepare to leave England and take the fight to the enemy.

[…] Dirk Gently  book in depth over a couple of posts (something like William Patrick Maynard’s examination of the Fu Manchu novels) in the future. Be warned: there will be […]