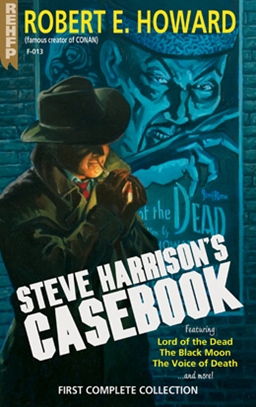 You know how people say “No offense intended,” and then offend like it’s an Olympic sport? I’m a major Robert E. Howard fan. In fact, I think his writing in the Conan stories is the best you’ll find in the entire genre.

However, he was not much of a hardboiled writer. The pulpster did (half-heartedly) give it a try, with nine completed Steve Harrison stories, as well as one unfinished tale and a synopsis.

In February of 1934, Strange Detective Stories introduced Steve Harrison in “Fangs of Gold.” It also included another Harrison story, “Teeth of Doom:” except that it didn’t. Not wanting to include two stories from the same author in one issue, the magazine renamed the hero Brock Rollins, changed the title to “The Tomb’s Secret” and used a Howard pseudonym, Patrick Ervin!

The next month, “Lords of the Dead” (retitled “Dead Man’s Doom”) was going to appear in Strange Detective, but alas, the publication folded. That story remained unprinted until 1978. Though, oddly enough, its sequel, “Names in the Black Book,” was included in the May, 1934 issue of Super Detective Stories. Those readers were probably looking for some history on Erlik Khan, the villain in both stories.

The fourth and final story to see publication during Howard’s lifetime was “Graveyard Rats,” appearing only four months before the writer committed suicide in 1936.

“The House of Suspicion” was printed in 1976. In that one, Fred Blosser completed Howard’s “The Mystery of Tannernoe Lodge” and added Khan in to make it a trilogy with Harrison’s antagonist. “The Black Moon,” “The Silver Heel” and the untitled synopsis all saw first printings in the nineteen eighties.

The two-fisted, don’t give a damn, gun-shooting private eye was created by Carroll John Daly, who beats out Dashiell Hammett by a few months for the honor of inventing the hard-boiled school: Though first certainly does not equal better. That style of writing reached its popularity peak in the form of Mickey Spillane’s Mike Hammer (though I find the Hammer books unreadable). While not my thing, I do recommend Hugh B. Cave’s hard-drinking private eye, Peter Kane. 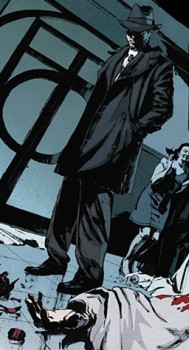 “Lords of the Dead” was the first Harrison tale I read and the prose style is heavy handed. The descriptive style that works wonderfully in the Conan tales doesn’t come across as well in Howard’s detective stories.

His pent up fury had swept away everything but a berserk madness to grip and rend and tear in primitive passion… Dizzy with glutted fury he struggled up, still gripping the limp shape, gasping incoherent blasphemy.

There is no layering of character with Harrison. He’s a one-dimensional, predictable tough guy. And he seems more at home in an El Borak story than the streets of California.

In a letter to August Derleth, Howard wrote, “You’re right in saying that I don’t have the feel for detectives that I do for weirds. However, I’ve been writing weirds for nine years and “Black Talons” was the first detective story that I ever wrote in my life.”

This letter was written somewhere around 1933. August Derleth certainly knew something about detective stories, having already created Solar Pons.

Long before an evil mastermind revealed the innermost parts of his plan to a seemingly helpless James Bond (who of course would escape and use his newly gained knowledge), Howard was having Harrison’s opponent do the same. Chained to the wall below ground in the bad guy’s lair, Harrison is confronted by Erlik Khan, descendent of that Genghis fellow.

And Khan just goes on and on, revealing detail after detail to Harrison, back to his time in Mongolia. It’s a long-winded monologue to no purpose at all for the villain. In any genre, this clunky plot device doesn’t work. 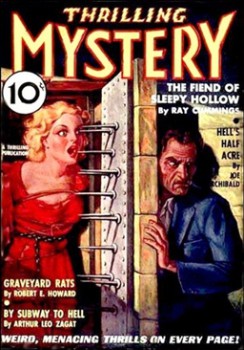 To be fair to Howard, there’s absolutely none of this palaver in “Graveyard Rats.” In fact, it seems like Howard had two different ideas on how to write his detective stories. Some, like “Rats” and “Fangs of Gold,” feel like H.P. Lovecraft horror tales. While the Khan stories and “The Tomb’s Secret” are much more like Sax Rohmer adventures.

There’s a school of thought that if you don’t like the genre you’re writing in, or you look down on it, it comes through in your work. I happen to think this is often true and is the primary reason I don’t hold Raymond Chandler’s work in the same esteem as the majority of hardboiled fans. His disdain comes through. Howard wasn’t crazy about his foray into the world of private eyes.

I’ve about decided to quit trying to write detective yarns. I sold a few of them – the first one I ever wrote, in fact – but I can’t seem to get the hang of the art. Maybe it’s because I don’t like to write them. I’d rather write adventure stuff.

And finally he moved on: “I’ve given up trying to write detective yarns – a job I despise anyway – and am concentrating on adventure stuff.”

The Harrison stories are inferior to Howard’s works featuring Conan, Solomon Kane, El Borak and Kull. However, I do think that had he carried on, he might have carved out a niche in the hardboiled school with Rohmer-like tales that were more adventure than detective. August Derleth wrote just such a Solar Pons novel that wasn’t published until after his death, The Terror Over London.

I happen to think just about any story that Robert E. Howard wrote is worth reading once because he was that good of a writer. A description of a battle from “The Scarlet Citadel:

The clash and clangor of steel was as that of a million sledges on as many anvils. The watchers on the walls were stunned and deafened by the thunder as they gripped the battlements and watched the steel maelstrom swirl and eddy, where plumes tossed high among the flashing swords, and standards dipped and reeled.

THAT is how you paint a picture.

The Harrison stories are not ones likely to draw you back too often. In fact, I’ve only read about half of them. Though, if you want a private eye who is more likely to use a mace or an axe than a gun (really, I mean it), then he’s your guy.

I understand your feelings about Chandler, Bob, though I don’t share them. I prefer to think of his ambivalent relationship to his genre as producing a tension that was often very fruitful. The funny thing is, he repeated your charge against him almost verbatim, against John Dickson Carr; Chandler said he couldn’t read Carr because Carr didn’t like writing mysteries, and it showed in the writing.

Great article. I never got the sense REH really liked Weird Menace stories, either, as those seem mostly to be going through the motions and lack the charm that even some of Howard’s simplest boxing tales have.

As you probably know, Chandler didn’t leave me cold, either. I agree with Thomas… although I also probably disagree with the majority of his fans in not preferring THE LONG GOODBYE over all his other works. By the time he got to THE LITTLE SISTER, THE LONG GOODBYE, and PLAYBACK Chandler seemed worn down and mournful, probably because he was, and I didn’t think it made for reading that was as enjoyable.

Howard, if you agree with me, the least I can do is agree with you – I too rank Chandler’s earlier novels higher than The Long Goodbye. Farewell My Lovely edges out The Big Sleep for his best book, in my opinion. I finally got around to The Little Sister just last year, and though there were great passages in it (especially those dealing with the cops – you can always count on Chandler to rise to the occasion when the police arrive), on the whole the book had a sordid, sleazy feel that the earlier ones didn’t, even though they often use the same devices to deal with the same subjects.

Farewell, My Lovely is my favorite as well, although The High Window and Lady in the Lake are close seconds, then The Big Sleep. I can see myself re-reading all four of those.

My problem with Little Sister was the convoluted conclusion, but you’re right about the sordid feel.

Have you ever read Howard Pine’s The Taste of Ashes? I put it in a class with the best of Chandler. I’m eager to read the collected Howard Pine coming from Haffner Press: http://www.haffnerpress.com/book/halo-for-hire-the-paul-pine-mysteries/

Chandler just never did much for me (though I don’t mind listening to Eliot Gould reading the stories, and I like a couple of the movies).

There aren’t too many folks who share my take on Chandler, so I just roll along as my own little minority. No biggie, as there are so many other writers to like.

[…] a few here at Black Gate, including Garrett, PI, Dirk Gently, Nero Wolfe, Sam Spade, Streeter, Steve Harrison, Solar Pons and of course, that Holmes fellow (use the search field for him). There are an awful […]

[…] to review Conan pastiches here at Black Gate. I am absolutely a Robert E. Howard and Conan fan. Perhaps you read this recent post? So, looking to indulge my non-mystery interest (I really want to write something on […]

[…] Life of Sherlock Holmes post on Robert E.Howard’s hard boiled/adventure private eye stories starring Steve Harrison. At the time, I thought it would be neat to see a post on Howards’ boxing stories. And I knew […]