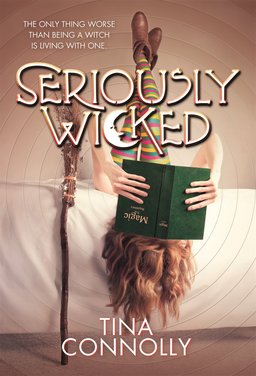 I met Tina Connolly at the World Fantasy Convention a few years ago, and had the good fortune to hear her read. She knows how to spin a tale, and has a gift for smooth, easy prose. If I could only bring a handful of books with me to a desert island, Tina Connolly would make the cut.

Her latest novel, Seriously Wicked, will be released this May and it sounds like a lot of fun. Keep an eye out for it — you’ll thank me later.

Camellia’s adopted mother wants Cam to grow up to be just like her. Problem is, Mom’s a seriously wicked witch.

Cam’s used to stopping the witch’s crazy schemes for world domination. But when the witch summons a demon, he gets loose — and into Devon, the cute new boy at school.

Suddenly Cam’s got bigger problems than passing Algebra. Her friends are getting zombiefied. Their dragon is tired of hiding in the RV garage. For being a shy boy-band boy, Devon is sure kissing a bunch of girls. And a phoenix hidden in the school is going to explode on the night of the Halloween Dance.

To stop the demon before he destroys Devon’s soul, Cam might have to try a spell of her own. But if she’s willing to work spells like the witch… will that mean she’s wicked too?

We previously covered Tina with her Nebula-nominated debut novel Ironskin, and its sequel, Copperhead.