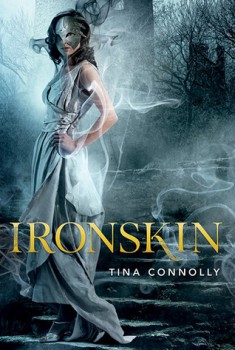 Ironskin is a fairy tale reimagining of Jane Eyre and the debut novel for author Tina Connolly. I have never read Jane Eyre, and wouldn’t have known the two were related, but there was an author note at the end.

Our Jane comes to the mysterious Mr. Rochart’s home to work as a governess to his child, Dorie. Dorie, like Jane, has been affected by the fey war. Unlike Jane, Dorie does not wear the scars on her face. Instead her power came from birth. Her mother was taken over by a fey before she was born, leaving Dorie with a fey curse. The girl can make things fly, and uses her power instead of her hands. Jane is tasked with teaching Dorie to use her hands, and act like any other child. As Jane works with Dorie to these ends, she discovers more about the fey curses than she bargained for.

Jane’s life has been hard. Her brother lost his life in the fey war. A bomb destroyed him, and the fey shrapnel from the blast caught Jane in the face, destroying one side of it. The shrapnel from the bomb has a type of fey substance in it that causes those maimed in the war to be cursed. These curses make those injured feel unpleasant things such as sadness, hunger, and, in Jane’s case, rage. The curse also affects those that come in contact with the scarred person. Jane wears an iron mask that shrouds half of her face to keep her wounds from infecting anyone else. People like Jane are called ‘ironskin.’ While this has caused self-loathing and depression in Jane, it quickly becomes repetitive.

There is a love story brewing between Rochart and Jane, but it felt forced. Rochart is set up to be mysterious and brooding, but comes off as creepy. The conversations building a relationship between the two are few. Jane starts to feel attraction, and a little anger that Rochart ignores his daughter. He tells Jane fey stories that link to well-known fairy tales, but they are what make Rochart creepy. Jane finds them romantic, and assures him that he is not crazy. It goes against her character for her to accept and not question him, but because he is willing to touch her, even though she is an ironskin she gets fuzzy brained and forgets any questions. She also develops a quick jealousy to the ‘pretty ladies’ Rochart seems to keep as clients. These ladies circle around the biggest mystery that Rochart is hiding. It is through them that Jane tries to discover what is really going on.

Ironskin is at heart a gothic novel. The atmosphere it creates is dark and moody with a classical fear of the forest. The problem is that it becomes repetitive. The prose has a dark feel, but it more times than not turns stunted or forced. Jane reminds the reader of how awful she has it time and time again. It also felt trapped between its gothic romantic story and Jane’s heroics. The romantic notes become lost and tangled with the rest of the plot. While Jane is mooning over her twisted feelings for Rochart, she should be worried about the things they have discovered.

In the last seventy pages, Ironskin makes a decision on what it wants to be. Jane is jerked around, and when she finally has a reason to break down and hate the world, she picks herself up and fights back. The pace picks up, something that would have helped the novel earlier on.

The bigger picture in Ironskin is what is defined as beauty. Jane feels ugly and shamed by her war scars, but while trying to help Dorie, she gains the courage to control her life. Other women, Rochart’s ‘pretty ladies,’ go to great lengths for perfection, even if that perfection is not human. The message is clear throughout the novel, and what drove it home in the end.

[…] first novel Ironskin was an historical fantasy set in an alternate version of early 1900s England, and was nominated […]

[…] previously covered Tina with her Nebula-nominated debut novel Ironskin, and its sequel, […]