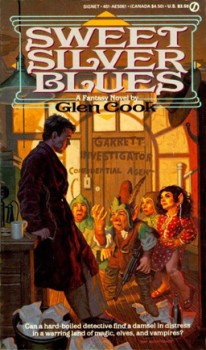 Last year, John O’Neill wrote a post about the Garrett PI collections by Glen Cook. The talented Cook is best known for his excellent dark fantasy series about a mercenary group, The Black Company.

The Garrett books are light years away in tone and style from those of The Black Company. However, they are identical in regards to quality of writing. Garrett is the pre-eminent fantasy PI (private investigator).

Cook has written a series of books that appeals to fans of the hardboiled PI, notably practiced by Raymond Chandler, fans of the humorous fantasy world best typified by Terry Pratchett’s Discworld and to those who have read Rex Stout’s Nero Wolfe mysteries. The fact that Cook has masterfully combined all three of these elements is admirable in the extreme.

Garrett is a former Marine who spent five inglorious years serving in the seemingly endless war between his nation of Karenta and Venagata. They battle over a region called The Cantard, home to most of the world’s silver mines. And silver is the resource that fuels sorcery. And since Karenta is ruled by the magic using Stormwardens, no cost in human capital is too great to rule The Cantard.

He’s now a private investigator in the city of Tunfaire, which is populated by humans, dwarves, pixies, ogres, trolls, and various races. In the opening scene of the first book, Sweet Silver Blues, Cook parodies the typical ‘hung-over PI with a client at the door’ trope. It’s actually the most over the top hardboiled prose of the entire series. Don’t let it put you off.

Garrett is generally lazy, stubborn, and with a pretty solid code of honor. Dames of all stripes figure into the stories: usually causing him trouble. Morley Dotes, a lethal half-dark elf with far less morals, often assists him.

Cook absolutely knows the mystery and hardboiled genres. He uses and pokes fun at them throughout the still-growing fourteen book series. For example, early in book two, Bitter Gold Hearts, Garrett examines the shoe of a Stormwarden’s kidnapped son:

‘I gave the shoes the full eyeball treatment. It never works out, but you always look for the speck of rare purple mud or the weird yellow grass stain that will make you look like a genius. I didn’t find it this time, either.’

That’s absolutely a jab at Sherlock Holmes’s ability to deduce that a client walked from the Waterloo station because only in the construction there can a particular type of tar be found in all of London and the like. As Holmes would say,
“A distinct touch!”

Garrett, like Travis McGee, Philip Marlowe, and other detective knight-errants, works for a client, but often goes above and beyond out of a sense of chivalry and duty. Of course, that often gets him into loads of trouble. Heck, you could say that trouble is his business (Did you get that reference?), though he’d prefer his business to be staying out of it.

Much of his success is due to his partnership with The Dead Man. Who isn’t actually a man, but a dead Loghyr, a race whose spirits and minds stay alive after the body dies. So, four hundred pounds of dead genius occupies a chair in Garrett’s house, lending his powers, expertise, and sarcasm.

Dean (housekeeper and cook), Tinnie Tate (a girlfriend), Saucerhead Tharpe (hired muscle and friend), Deal Relway (Secret Police), Pular Singe (a ratgirl) and many, many more characters come and go. It’s quite a cast of characters.

Most of the adventures take place in TunFaire, though in the first story, Garrett and Dotes head off to deal with vampires and centaurs in The Cantard. Tunfaire isn’t as much of a living organism as Pratchett’s Discworld, though the social structure and divisions play a big part in the stories and in Garrett’s outlook on life.

I wrote a post about Nero Wolfe, my favorite detective series. Cook is most certainly a Wolfe fan, as Garrett (Archie Goodwin), The Dead Man (Wolfe), Dean (Fritz) and Tinnie (Lily Rowan) are clearly influenced by Stout’s series. But I see them as more homage than copy.

Likewise, John D. MacDonald’s (my favorite author) Travis McGee books all have a color in the title. All of the Garrett books are named with an adjective, a metal and a plural noun. That certainly can’t be just a coincidence.

You don’t have to read the books in order, but it certainly helps to do so. Characters and relationships evolve over the course of the series (though Garrett is at war with horses from book one!).

I’ve read The Black Company series twice and consider Cook to be a first class writer. I don’t know that anybody could do a better job with the fantasy PI genre than he has done with the Garrett books. If you enjoy light fantasy, hardboiled mystery, or Nero Wolfe, you absolutely should read this series.

I re-read the first two books for this post and if I had the time, I absolutely would continue on with all the rest. Of course, you’d probably only be reading posts about them until I was done.

So, go ahead and grab some Sweet Silver Blues. And read John’s post: there were some good comments following it. And I don’t mean mine.

I read a bunch of these books (all that were then available) back in the 1990s and really enjoyed them. The one thing that made me kind of crazy is that there wasn’t any list that put them in proper order — you had to piece it together based on publication dates, and in a few cases there were multiple books in a single year.

Really should add them to the queue again.

[…] promised, this week over at Black Gate I talk about one of my favorite series – the Garrett, PI books by Glen […]

Terrific article as usual, Bob, echoing many of my own sentiments. I wouldn’t mind comparing bookshelves one day.

Thanks Violette. I’ve read the next two Garrett books since finishing this article. They are just really, really good!

I’d forgotten about the painting he picks up in Old Tin Sorrows. There’s so much good stuff packed into the series, some of which goes away, it’s hard to remember it all.

The same way I think that Discworld is THE WAY to do funny fantasy, Cook did fantasy PIs with Garrett.

[…] of police/private eye books out there. I’ve written about a few here at Black Gate, including Garrett, PI, Dirk Gently, Nero Wolfe, Sam Spade, Streeter, Steve Harrison, Solar Pons and of course, that […]